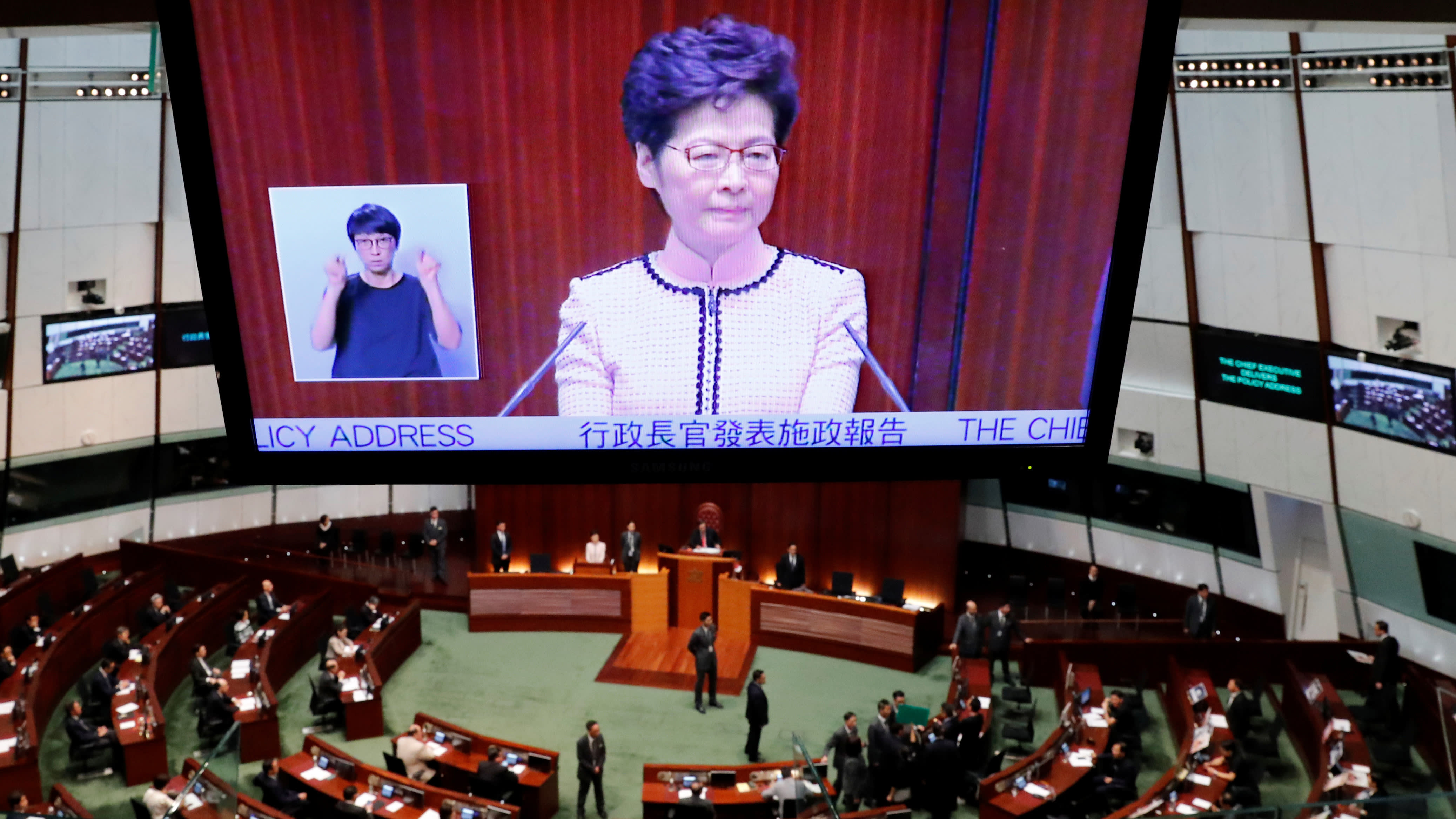 Hong Kong Chief Executive Carrie Lam is seen on a screen as she reacts to protests by pro-democracy lawmakers, at the Legislative Council in Hong Kong on Oct. 16.   © Reuters

HONG KONG -- Hong Kong Chief Executive Carrie Lam on Wednesday said the city has slipped into a technical recession since a series of protests began in June.

Lam was forced to abandon her annual policy address before the Legislative Council after being shouted down by opposition lawmakers who had reconvened in a raucous session after a monthslong break.

Lam left the chamber moments into her speech, as pro-democracy politicians chased her from the podium yelling taunts and hurling anti-government placards onto the floor. Some wore masks with the face of Chinese President Xi Jinping -- a clear reference to the widespread view that Beijing has Lam and her government in its grip.

The scene was repeated two more times before the embattled chief executive retreated to her official residence -- the Government House, about two kilometers away -- to deliver her address on television, a delay of more than an hour from the originally scheduled time of 11 a.m. It was the first time since the 1997 handover to China from the U.K. that the city's top leader was unable to deliver the annual address in the Legislative Council chamber.

Hong Kong, facing its most potent political crisis since the handover, has been rocked by more than four months of social unrest and anti-government demonstrations, upending the city's reputation as a stable financial hub and delivering a blow to the economy. In her video speech, Lam said the economy had "slipped into a technical recession" in the third quarter, confirming what other government officials and private economists have previously forecast. Third-quarter gross domestic product is expected to be released at the end of this month. In August, the government lowered its economic growth forecast for the year to 0%-1%.

Lam also laid out a broad vision for lifting Hong Kong from its political turmoil, saying violent clashes between protesters and police have "seriously damaged" the city's international image and "undermined its attractiveness" to foreign investors. Without reconciliation, "people will lose faith in the future," she said.

Small and medium-size companies have been particularly hard hit by the protests, with many closing temporarily as violence has spread to most districts across the city. Lam said that in addition to funding and loan support announced over the past couple of months, the government could "introduce other measures to help enterprises and the public tide over difficult times."

She repeatedly voiced her faithfulness to Hong Kong's "one country, two systems" legal framework that guarantees "the rights and freedoms" under the Basic Law, the city's mini-constitution. Demonstrators have protested against what they describe as Beijing's growing influence in Hong Kong's legal matters and what they say is an erosion of the city's semi-autonomous status.

Lam acknowledged Hong Kong's high property prices as a source of strong public grievance, saying that "the government has an indispensable role" to provide adequate housing. She vowed that citizens would "no longer be troubled by or preoccupied with the housing problem, and that they will be able to have their own home."

Hong Kong's powerful real estate companies have long been the target of frustration among the city's residents, many of whom cannot afford a home. Hong Kong frequently tops surveys of the world's priciest property markets.

A government source said that over the next five years, through 2024, the government will make available roughly 100,000 residential units -- 76,000 for rentals and 24,000 for subsidized sales -- for people who qualify for affordable housing assistance. The source said the government could revise the number of units if there is a prolonged recession and additional layoffs.

Lam noted that property companies recently announced plans to provide or lend land for housing development while "shouldering a share of social responsibility." In welcoming the move, Lam said it would not affect any of the government's new policies.

After the broadcast of the video speech, Lam answered a question at a news conference on why the policy address did not address the Hong Kong people's desire for democratic reforms and their fear that the city's liberties are being eroded under Chinese rule.

"This single policy address could not address all the problems in society," she said, adding, "I do not agree or submit to the view that Hong Kong's rights or liberties have been eroded in any way."

Lam said that to call for universal suffrage in a policy address that is bound by the constitutional requirements of "one country, two systems," would "not be a responsible act."