HONG KONG/BEIJING -- Authorities in Hong Kong will not permit organizers to hold a rally Tuesday while the mainland celebrates National Day, stoking fears of further confrontations between police and protesters.

Hong Kong police denied the application by the Civil Human Rights Front, a pro-democracy group, to stage a protest on public streets, citing the risk of violence and threat to public safety. The CHRF unsuccessfully appealed the decision.

While the CHRF regrets the outcome, representatives said they will let Hong Kong citizens decide for themselves whether they protest. Online activists designated Tuesday as the day to "dress in black," urging residents to don the attire of protesters.

Hong Kong officials are bolstering enforcement against demonstrators leading up to Tuesday's 70th anniversary of the founding of the People's Republic of China. On Sunday, authorities arrested 146 people aged 12-53 who took part in unauthorized protests.

But activists could mount unsanctioned demonstrations Tuesday, resulting in more clashes with police.

Beijing hinted earlier at deploying People's Liberation Army forces into Hong Kong in response to the violence. But as National Day approaches, the mainland has highlighted its trust in Hong Kong to handle the protests while working under the "one country, two systems" framework intended to govern the territory.

President Xi Jinping, during a speech late Monday commemorating the 70th anniversary of Communist-led China, said the nation will continue to uphold the principles of one country, two systems.

"Unity is iron, steel and power," Xi said. Those words appear to allude to the trade war with the U.S., as well as the Hong Kong protests. 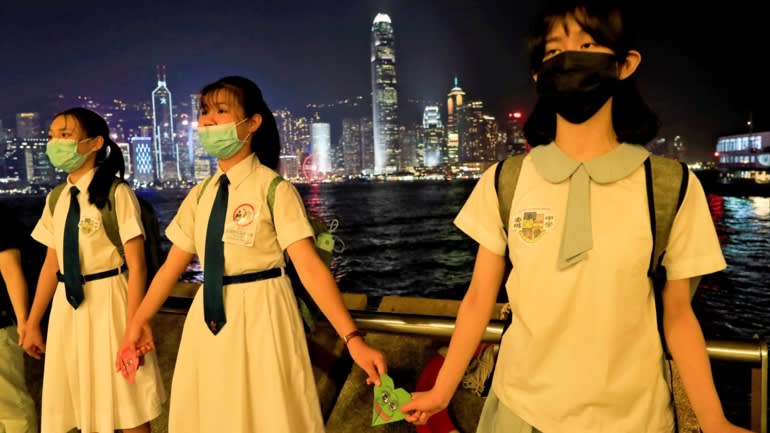 Anti-government protesters form a human chain in the harbor area of Hong Kong on Sept. 30.   © Reuters

Hong Kong Chief Executive Carrie Lam is in Beijing for two days through Tuesday, participating in the festivities. Lam eventually withdrew the controversial extradition bill that sparked the monthslong protests in the territory. But sources told the Hong Kong paper South China Morning Post that she had to seek approval from Xi before making the announcement in early September.

This revelation solidified the view among demonstrators that Lam cannot reach any decision by herself, and attracted closer scrutiny of her ties to China's top leader.

Hong Kong's district council elections set for Nov. 24 have received renewed focus. Direct public voting for the council seats means the elections will serve as a referendum on the status quo. Joshua Wong, a leader of the 2014 pro-democracy Umbrella Movement, is running for a seat.

Approval of China-friendly politicians in Hong Kong has plunged during the protests, and experts think pro-democracy forces are poised for a major victory. Such an outcome would embarrass Beijing, which has told mainlanders that the vast majority of Hong Kongers oppose the demonstrations.

In Hong Kong political circles, speculation is mounting that Lam might invoke emergency powers that restrict the right to assemble as well as limit telecommunications. Provisions on the books grant her the discretion to postpone district council elections.

If the demonstrations show no sign of abating before the election, local media commentators say the territory's government may resort to delaying or even canceling the vote.