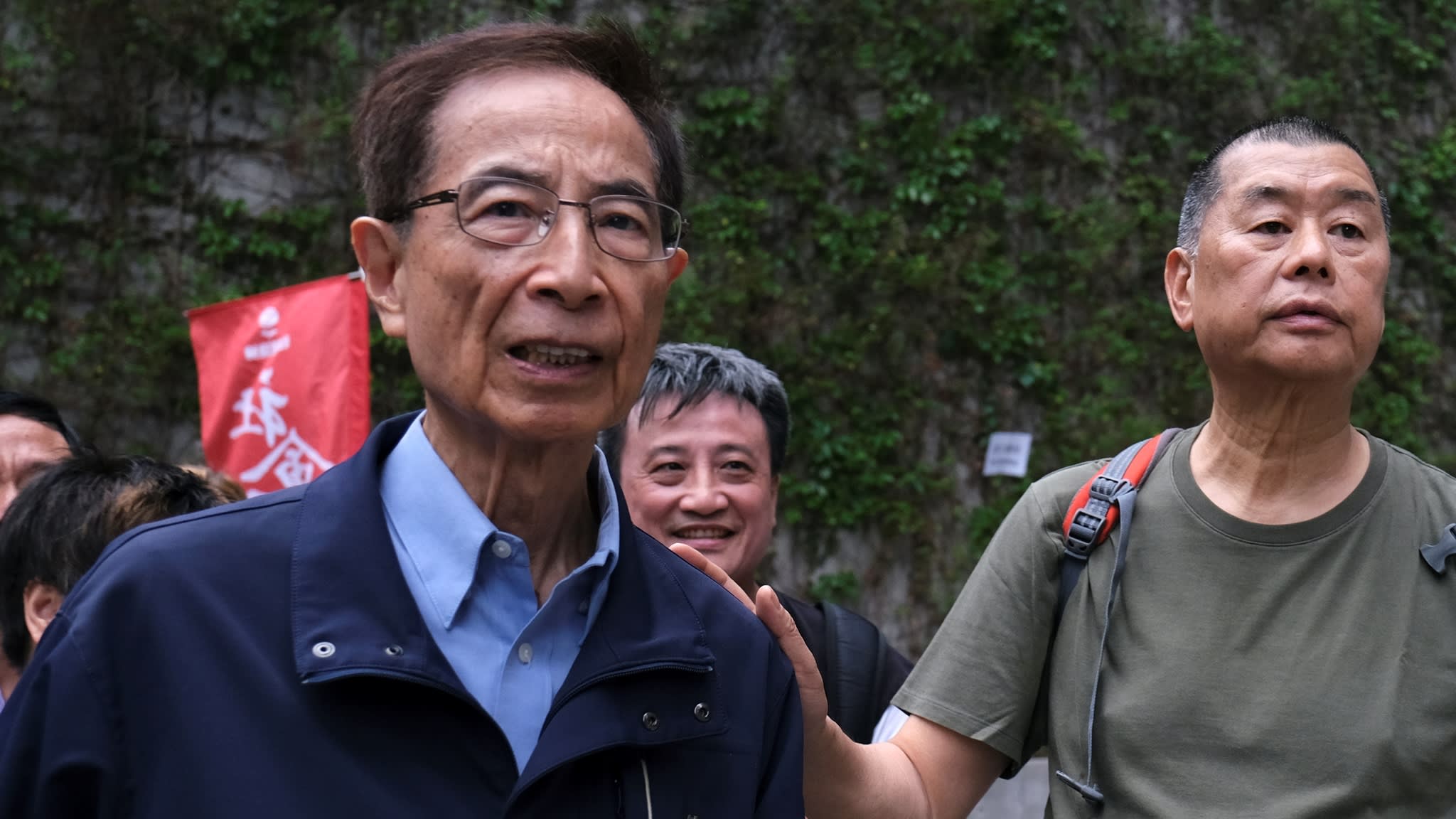 HONG KONG (Reuters) -- Hong Kong police arrested 15 activists, including veteran politicians, a publishing tycoon and senior barristers, in raids on Saturday in the biggest crackdown on the city's pro-democracy movement since the outbreak of mass protests last year.

Among those detained on charges of illegal assembly were Democratic Party founder Martin Lee, 81, millionaire publishing tycoon Jimmy Lai, 71, and former lawmaker and barrister Margaret Ng, 72, according to media and political sources.

In all, one serving and nine former legislators were arrested, including veteran activists Lee Cheuk-yan and Yeung Sum.

Democratic legislator Claudia Mo, who was not among those detained, said the city government, led by Chief Executive Carrie Lam, was trying "into introduce a ring of terror in Hong Kong".

"They are doing whatever they can to try to silence, to take down, the local opposition," Mo said, pointing to upcoming legislative elections in September in which democrats hope to win back veto power in the city assembly.

Hong Kong police superintendent Lam Wing-ho told reporters that 14 people aged between 24 and 81 were arrested on charges of organising and participating in "unlawful assemblies" on Aug. 18 and Oct. 1 and 20 last year. He did not identify the 14.

Those days saw big and at times violent protests across the city.

Five of the 14 were also arrested for publicizing unauthorized public meetings on Sept. 30 and Oct. 19, Lam said.

Police sources later confirmed the arrest of Leung Yin-chung, the only serving legislator to be caught up in the raids so far.

They were all due to appear in court on May 18, but Lam said more arrests were possible. Some of those arrested on Saturday were later released on bail.

The raids mark the biggest crackdown on the pro-democracy movement since the beginning of the anti-government protests across the former British colony in June last year.

Marchers initially targeted a now-scrapped bill proposing to send suspects to mainland China for trial but protests broadened into demands for full democracy and a public investigation of the use of force by police.

After his release on bail on Saturday afternoon, Martin Lee said he did not regret his actions.

"I'm proud to have the chance to walk our democracy road with Hong Kong's excellent young people," he said.

A spokesman for the government's Security Bureau said that regardless of background or status, "in Hong Kong, everyone is equal before the law".

Authorities in Hong Kong have arrested more than 7,800 people over their involvement in the protests, including many on rioting charges that can carry jail terms of up to 10 years.

It is not clear how many of them are in custody.

The spike in arrests comes amid deepening fears over Beijing pressure on Hong Kong's independent judiciary.

In a special report published on Tuesday, three of Hong Kong's top judges told Reuters that the independence of the city's judicial system is under assault from the Communist Party leadership in Beijing. The judiciary, they said, is in a fight for its survival.

Saturday's arrests come after several months of relative calm amid a partial coronavirus lockdown but as Chinese and city government officials launch a new push for tougher national security laws for the city.

Hong Kong returned to Beijing in 1997 under a "one country, two systems" formula that guarantees it broad freedoms not seen in mainland China, and a high degree of autonomy.

A previous attempt to draft a national security law for Hong Kong, known as Article 23, was met with mass protests in 2003 and abandoned.

Hong Kong government and security officials have recently described some of the democracy movement's actions as being close to terrorism.

Authorities are increasingly using the threat of terrorism to justify the need for new national security laws, a requirement under the Basic Law - the mini-constitution that guarantees Hong Kong's broad freedoms and outlines its relationship with Beijing.