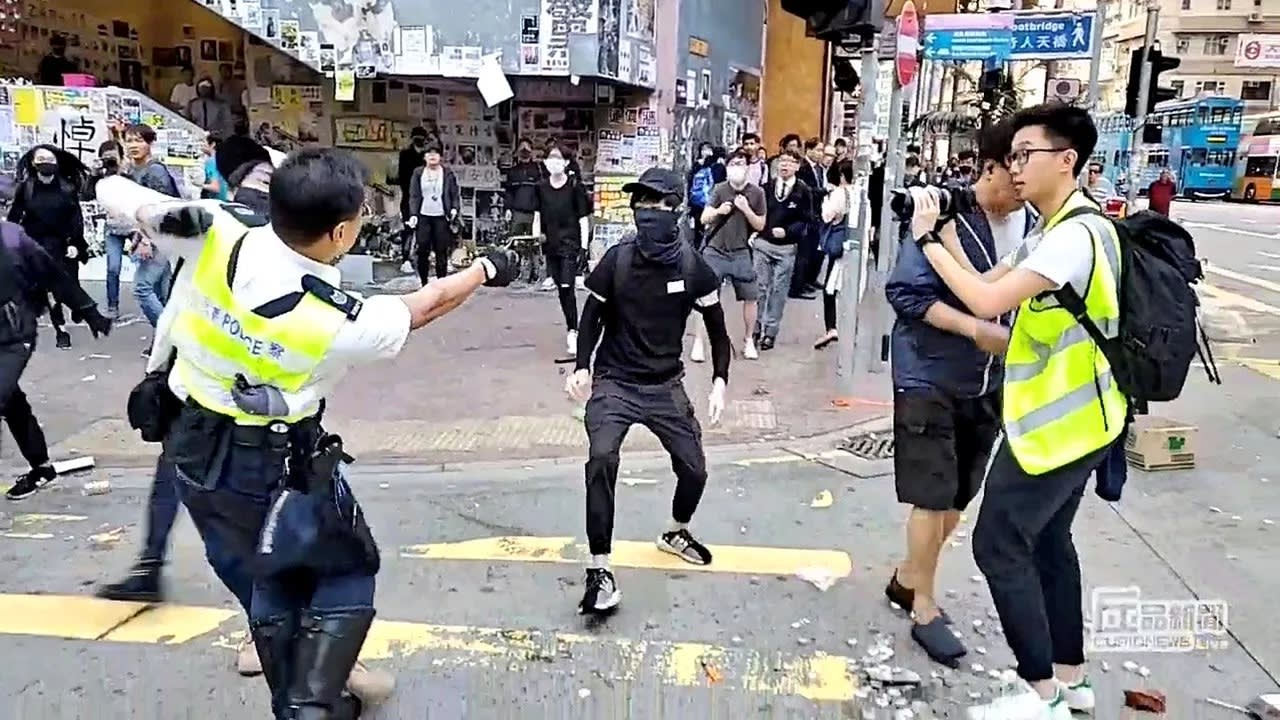 HONG KONG -- Violence spread across Hong Kong on Monday, as scenes resembling urban warfare gripped the city at the start of its 23rd week of political unrest.

As events quickly unfolded throughout the day, a police officer shot one demonstrator during the morning rush-hour, authorities said a man set on fire was in critical condition, and university campuses closed amid clashes between police and protesters.

A graphic video circulating online on Monday appeared to show a man being doused with some type of fluid and being set on fire. While details of the incident were unclear, the chilling scene brought widespread condemnation on social media.

The police department said it received a report at 12:53 p.m. that a man was attacked and set aflame on a footbridge in the satellite town of Ma On Shan. A Hospital Authority spokesperson later confirmed that the man was in critical condition.

Another video showed a black-clad demonstrator being shot at close range by an officer in a street confrontation. A Hospital Authority spokesperson said the 21-year-old man was wounded by a live round of ammunition, and police said that the man was not facing mortal danger following surgery.

The shooting marked the third time a protester had been hit with a live round during a confrontation with the police. On Oct. 1, an 18-year-old secondary school student was shot in the chest, also at close range. He has since been discharged from hospital. Three days later, a 14-year-old boy was hit in the leg after an officer opened fire during a clash in the New Territories.

Chief Executive Carrie Lam, in an evening news conference on Monday, condemned what she described as the violent attacks of "rioters," stressing that the government will not satisfy their "political demands."

"If there is still any wishful thinking that by escalating violence, [that] the Hong Kong SAR government will yield to pressure to satisfy their so-called political demands, I am making this statement clear and loud here: That will not happen," she said, adding that violence was not the solution to the problems facing Hong Kong. "Our priority now as a city is to end the violence and to return Hong Kong to normal as soon as possible." In another incident captured on video, an officer on Monday drove his motorcycle through a group of protesters on a street, brushing by several and knocking some to the ground. A police spokesperson said the officer had been attacked with a hammer.

"The officer has been suspended from all front-line duties instantly and has taken leave instantly," the spokesperson said, adding that the case is under investigation.

"Continuing this rampage is a lose-lose situation for Hong Kong," the spokesperson said. "Everyone is [a] loser. We appeal to everyone to please stay calm and rational."

Meanwhile, a citywide general strike hit most of Hong Kong's universities on Monday, as students blocked transport in and out of campuses, leading university authorities to cancel all classes for the day. Students at the University of Hong Kong and Polytechnic University clashed with police who arrived in the morning to clear out the barricades, firing tear gas. Students at HKU tried to halt the police's advances by throwing rocks, while video showed petrol bombs were being thrown by PolyU students.

University campuses are strongholds of the anti-government protests. According to the Hong Kong Police Force's Public Relations Branch, 3,001 protesters have been arrested since the large-scale protests began in early June, of which 1,064 are students.

Anger among the local student body has increased dramatically after university authorities declined to publicly condemn alleged police brutality, along with the recent passing of 22-year-old Chow Tze-lok, a student at the Hong Kong University of Science and Technology. He died on Friday from head injuries after falling from a parking garage where police had fired tear gas. 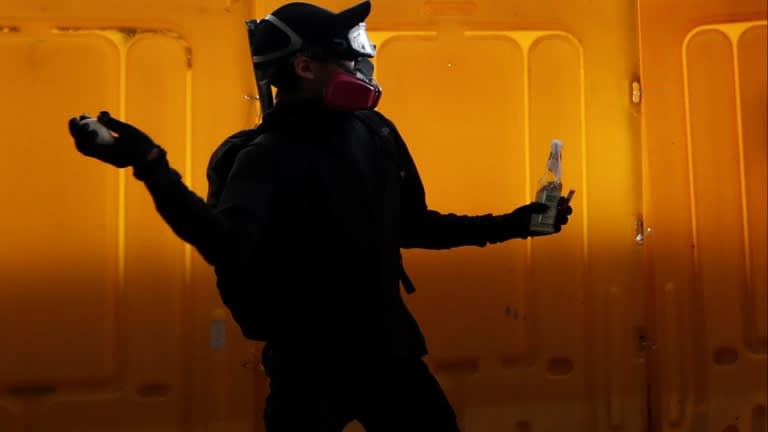 A protester throws a stone while holding a Molotov cocktail from behind a barricade during clashes with riot police at Hong Kong Polytechnic University in Hong Kong on Monday.   © Reuters

Also on Monday, protesters disrupted the morning commute by blocking roads and crowding rail stations. Many train services were suspended. The developments followed a weekend of peaceful memorials for the student and clashes between protesters and police at shopping malls across Hong Kong.

Stocks tumbled on Monday as clashes grew increasingly tense. The Hang Seng Index fell 2.6% as police used tear gas to disperse crowds in the city's high-rise Central business district. Some office staff in the area and other parts of the city left their workplaces by midday.

The government issued a statement on Monday saying that online rumors that it would "announce the suspension of work, classes and the stock market under the Emergency Regulations Ordinance," the colonial-era law that gives the government sweeping powers and was used to introduce the anti-mask law on Oct. 4, were "absolutely not true."

The government invoked emergency powers to introduce the ban on face masks, which protesters have used to protect themselves from tear gas as well as to shield their identities.

Meanwhile, the Hong Kong Monetary Authority denied rumors that it would place a cap on daily cash withdrawals from banks, calling it "totally fake and unfounded." The city's de facto central bank said in a statement: "The Hong Kong banking system is robust and sound, with ample liquidity to meet the needs of the public."