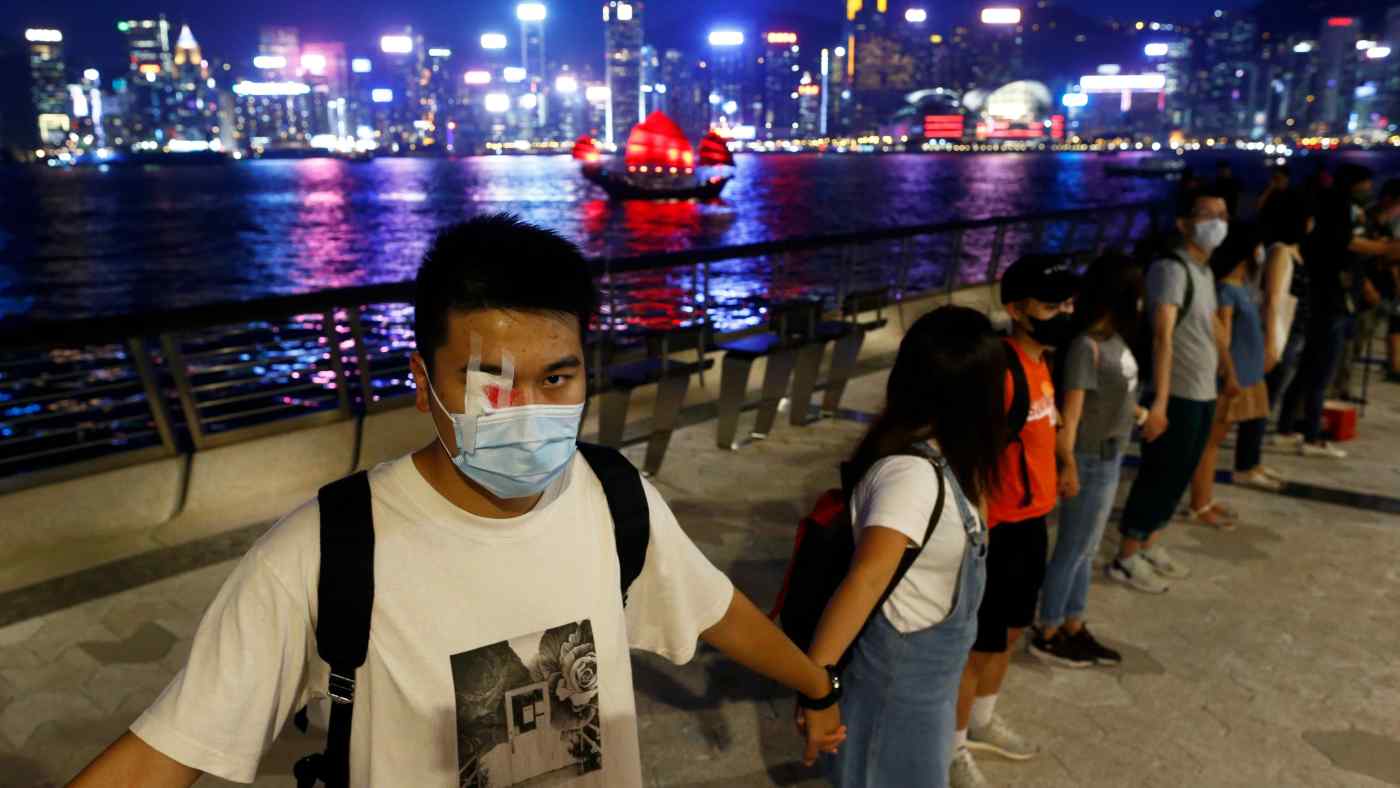 Protesters in Hong Kong hold hands to form a human chain during a rally on Friday night. Organizers of the event also asked foreigners to write letters to their governments and demand that they speak to China's government on behalf of Hong Kong people.   © Reuters
NIKKI SUN, Nikkei staff writerAugust 23, 2019 16:12 JSTUpdated on August 23, 2019 22:17 JST | Hong Kong, Macao
CopyCopied

HONG KONG -- Tens of thousands of protesters in Hong Kong linked hands to create human chains across the city on Friday night, as organizers strived to introduce more creative approaches to demonstrations in an effort to draw international attention to their cause.

Groups of demonstrators gathered to form a chain in the Wan Chai district of Hong Kong Island, an important commercial area, while similar lines forming in other areas of the island and Kowloon Peninsula, including the heavily touristed neighborhoods of Causeway Bay, Tsim Sha Tsui and Mong Kok.

Participants in the campaign, called "The Hong Kong Way," made a general point of not blocking roads or causing disruptions to traffic that might draw a police response; the organizers had not sought formal permission for the demonstration -- from the police.

"Hong Kongers, let's hold each other's hands and defend this city with our bodies and our will," said a poster calling for people to join the event. "Let's show the world our determination to resist tyranny."

The organizers said in a statement prior to the event that the purpose of Friday's human chain was to show solidarity among people who are united against a now-suspended extradition law and alleged excessive police force against protesters, in addition to a plea for international support. 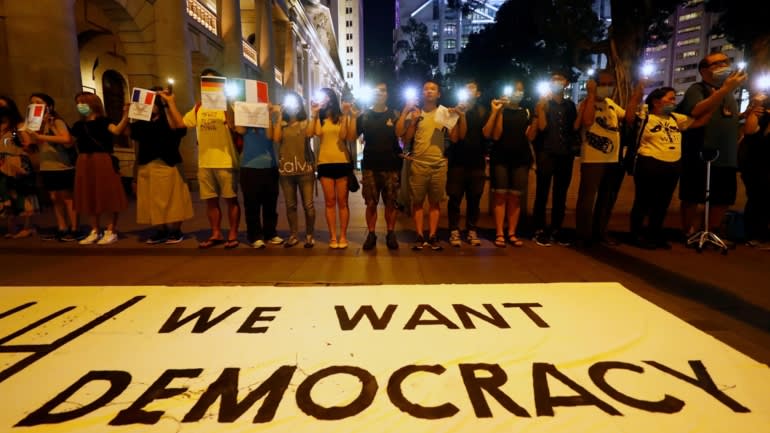 Protesters in Hong Kong on Friday night in the city's Central business district. The event was inspired by a large-scale demonstration 30 years ago in three former republics of the Soviet Union.   © Reuters

Organizers also asked foreigners to write letters to their governments and demand that they speak to the Chinese government on behalf of Hong Kong people.

In a show of opposition, a large number of taxis drove past demonstrators with Chinese national flags mounted on poles on their trunks and anti-protest signs in their rear windows.

Foreign governments are growing more concerned about the safety of their staff in Hong Kong. The Consulate General of Canada in Hong Kong on Friday said it had stopped sending their locally hired staff to travel outside of Hong Kong for business. The move came after a local employee at the British Consulate General in Hong Kong was arrested and detained in Shenzhen for more than 10 days during a business trip in the border city. Authorities in Beijing said the employee, a man, had broken a public security-related law.

Friday's event was inspired by a large-scale demonstration 30 years ago in three then-republics of the Soviet Union. About 2 million people formed a human chain connecting Estonia, Latvia and Lithuania to show the solidarity of Baltic people in their quests for independence from the former Soviet Union.

Organizers in Hong Kong, however, said independence was not their goal. "While we are just as determined as the Baltic demonstrators in the fight for our freedom, we do not share their goal for independence," the statement said.

A similar human chain also was formed in Taiwan in 2004, when more than 2 million people gathered to commemorate the February 28 incident, in which thousands of local people were killed in 1947 by troops sent by the Chinese government, then led by the Kuomintang party.

Friday's demonstration in Hong Kong was the latest among a series of protests since early June, triggered by controversial legislation that would allow people in Hong Kong to be extradited to the mainland. The movement began with peaceful mass marches, drawing up to an estimated 2 million people, according to organizers, followed by some violent clashes between police and protesters. More than 1,000 people have been arrested. 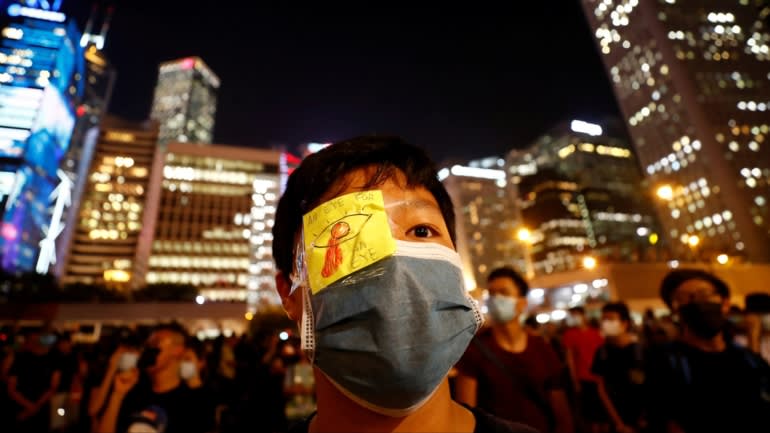 A demonstrator in Hong Kong wears an eyepatch with a slogan at a rally on Thursday. The "Eye for Hong Kong" campaign is in reference to a protester who had her eye severely injured during a rally this month.   © Reuters

The ongoing protests -- the biggest political crisis since Hong Kong's handover to China from Britain in 1997 -- have recently showed some positive signs, as an estimated 1.7 million people marched peacefully in heavy rain last weekend. It was the first time in more than two months that the police did not fire tear gas to disperse large crowds.

Ma Ngok, associate professor in government and public administration at Chinese University of Hong Kong, said prior to Friday's rally that a human chain would be very good publicity for Hong Kong protesters if a large number of people turned out.

Protesters are planning another demonstration at Hong Kong's airport on Saturday, a follow-up to other protests earlier this month that virtually shut down the important international transport hub.

The organizers are calling for disrupting ground transportation to the airport after a recent court injunction limited people from entering the terminal building. But Secretary for Transport and Housing Frank Chan said at a news conference on Friday that the injunction also forbids anyone from deliberately causing disruption in areas near the airport.

Meanwhile, internet users and celebrities have started an "Eye for Hong Kong" campaign on social media in reference to a female protester who had her eye severely injured during a protest earlier this month.

The campaign calls on people to take a selfie with their right eye covered and post the photo on social media. There have been more than 30,000 posts with related hashtags on Instagram and more than 40,000 posts on Twitter as of Thursday.