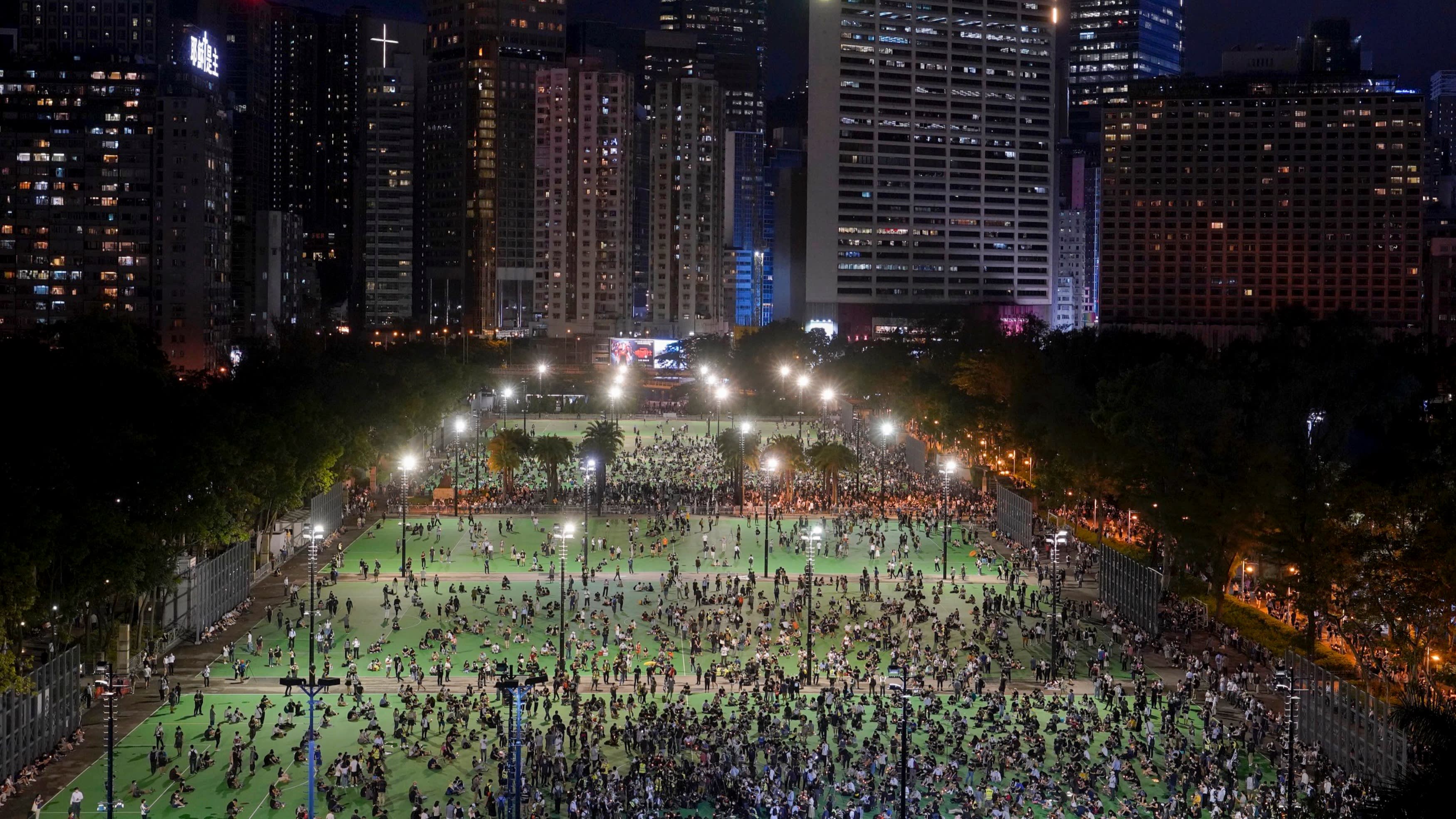 Police had banned the annual memorial for the first time in three decades, citing health concerns over the coronavirus pandemic. The move comes amid rising concerns over a weakening of the "one country, two systems" framework that underpins the territory's autonomy and democratic freedoms.

The Hong Kong Alliance in Support of Patriotic Democratic Movements, the organizer of the yearly June 4 event, urged the public to instead participate in an online commemoration and raise candles across the city. It also encouraged people around the globe to share their thoughts on the Tiananmen protests on social media, using the hashtag #6431truth.

Still, some pro-democracy groups called for resisting the ban. Crowds began assembling at the city's sprawling Victoria Park in late afternoon and continued to swell after nightfall, despite continuous announcements over the park's loudspeakers warning against the gathering of more than eight people, in compliance with social distancing measures.

Some people in the crowd chanted slogans, including "Free Hong Kong" and "Hong Kong independence, the only way out." People also gathered in multiple locations across Hong Kong, where they raised candles and shouted similar rallying cries. 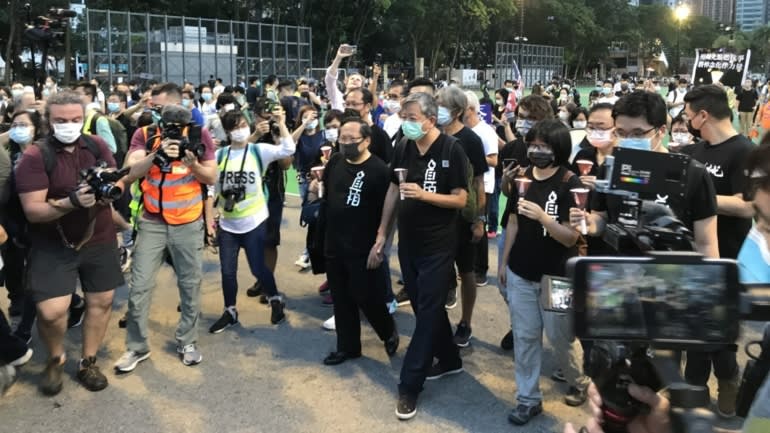 Pro-democracy activists, including event organizer Lee Cheuk-yan, center, with a blue mask, defy a police ban on Thursday in Hong Kong and gather in Victoria Park to mark the 1989 Tiananmen Square crackdown. (Photo by Kenji Kawase)

Lee Cheuk-yan, a pro-democracy activist and organizer of the annual event, said he was pleased to see people turn out in large numbers "in Victoria Park and every corner of Hong Kong to commemorate and condemn" the Tiananmen crackdown. He said that he did not have an estimate of the number of people attending the event because it was unofficial and spread out over the city.

"We do not know whether we can have a candlelight vigil next year," Lee said. "But this is like an exercise under banning," he told reporters after the ceremony.

The new national security law recently imposed on Hong Kong by Beijing could possibly be a lethal blow for Lee's organization, but he stood firm. "We are prepared like this year," he said. "We will do the same next year -- come to Victoria Park and light candles to commemorate."

While it appeared that no police entered the area of the park where the vigil took place, there was a heavy police presence just outside the park's various entrances. In another part of the city, police arrested some people for blocking traffic, according to a police statement. The police force said it "deployed minimum necessary force according to the situation."

"I think this is the last time we can come out and fight for freedom," said a 42-year-old woman, who identified herself as Ezita and brought her five-year-old son to Victoria Park. She said it was the first time both of them had attended the June 4 memorial, but that she felt a sense of urgency after witnessing many things that made her afraid for Hong Kong's future and for her son.

"Maybe, this is the last assembly for him," she said. "I thought I must take him here to let him know that maybe later there will be no freedom, no freedom of speech." 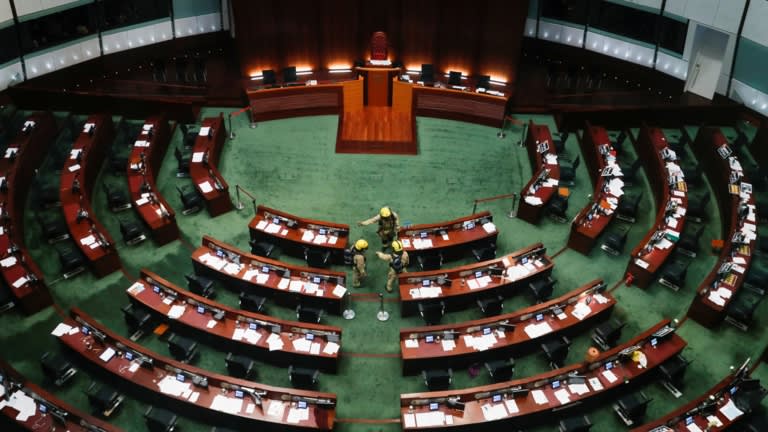 Hong Kong firefighters check the chamber of the Legislative Council after pro-democracy lawmakers hurled objects while the body prepared to vote on the national anthem bill on Thursday.   © Reuters

The passage of the anthem bill comes despite the efforts of pro-democracy lawmakers -- the minority in the city's quasi-independent lawmaking body -- to stall the debate by tabling adjournment motions and staging protests in the chamber. Previous meetings had descended into physical clashes and scuffles between opposing groups.

Under the law, people who "intentionally insult" China's national anthem, "March of the Volunteers," could face fines of up to 50,000 Hong Kong dollars ($6,450) and three years in prison. The law becomes effective on June 12.

China's anthem was written in 1930s wartime as a theme song for the film "Children of Troubled Times," calling on people to "arise, ye who refuse to be slaves!" It was adopted as the national anthem in 1949, when the People's Republic of China was established.

Fueled by the growing discontent toward Beijing, Hong Kong citizens began booing the anthem frequently at sporting events and protests in recent years. 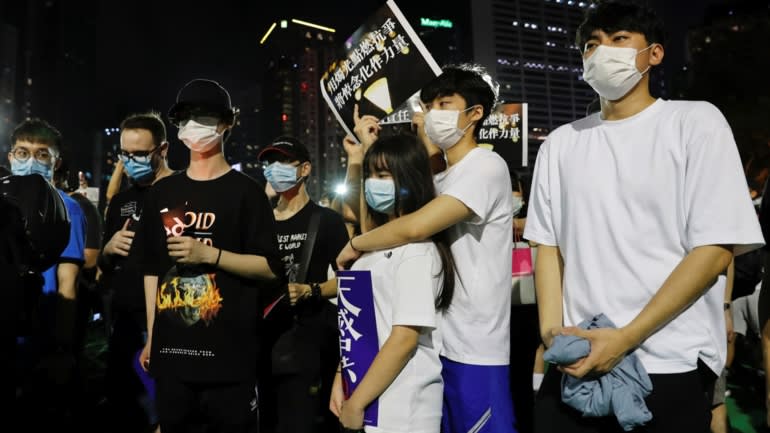 Earlier on Thursday, pro-democracy legislator Eddie Chu Hoi-dick splashed what he described as biofertilizer in the meeting hall, prompting the acting chairwoman, pro-Beijing legislator Starry Lee, to adjourn the anthem vote. Police and firefighters were later called into the Legislative Council to investigate the foul smell.

Chu said his action was to "remind the world of how the Chinese Communist Party killed its own people 31 years ago."

"A murderer stinks forever," he said.

The pro-Beijing camp threatened to take legal action against what it described as Chu's "unacceptable behavior." Police later said they would not rule out the possibility of arresting Chu.

"Around the world, there are 365 days in a year. Yet in China, one of those days is purposely forgotten each year," she tweeted on Thursday morning. "In Taiwan, there were once days missing from our calendar, but we've worked to bring them to light. I hope one day China can say the same."

In Beijing, the Tiananmen Mothers group, under heavy police guard, visited the graves of their children who were killed during the 1989 crackdown. They were required to register their ID cards with authorities.

Political tensions in the former British colony have increased recently following Beijing's move to impose national security protocols for the territory. The plan has drawn swift and intense international condemnation as critics fear the laws will put an end to the city's civil liberties, thus imperiling its status as a global financial hub.