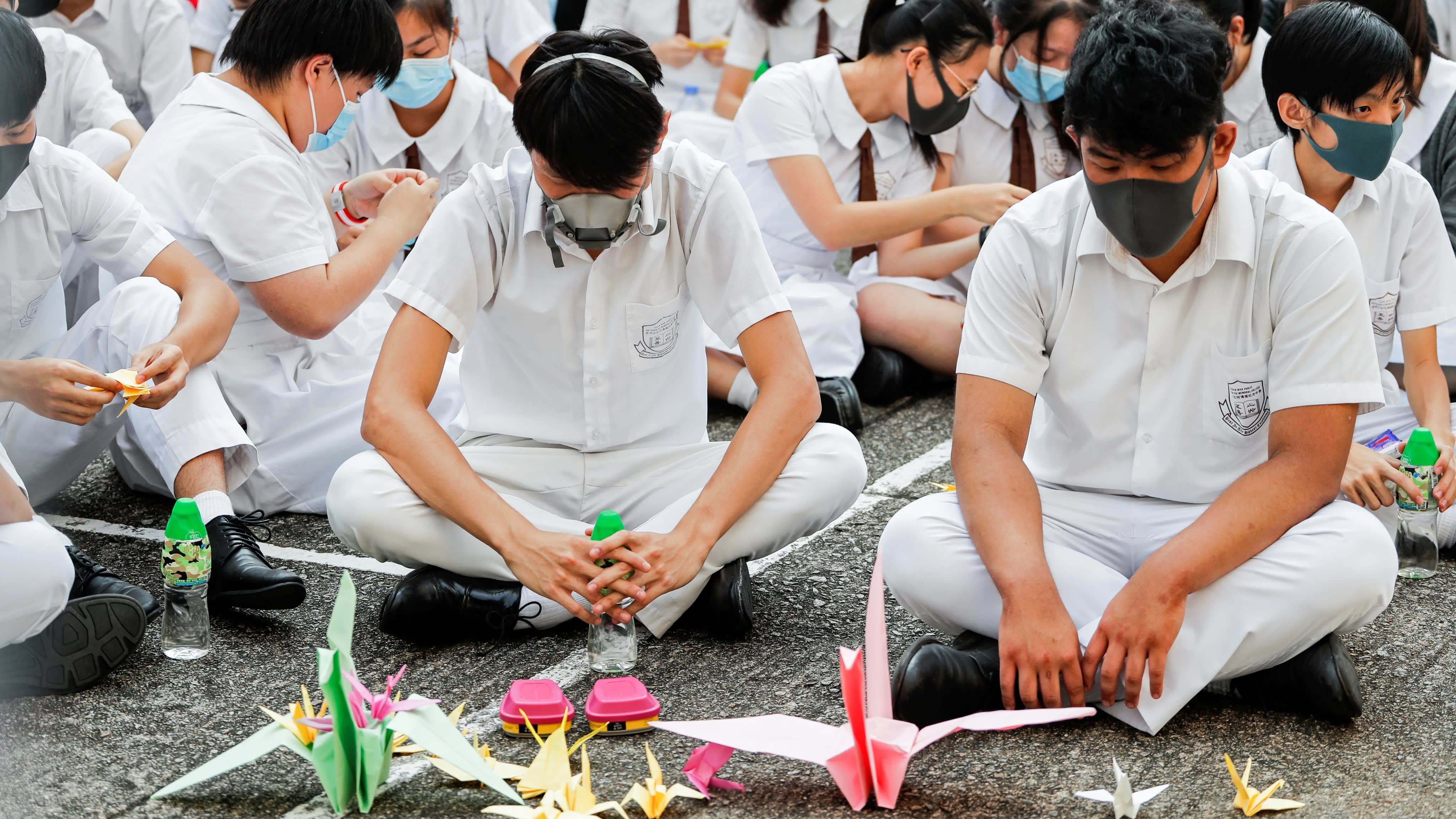 Schoolmates of a student protester who was shot by a policeman in Hong Kong on Tuesday sit beside paper cranes at a gathering at Tsuen Wan Public Ho Chuen Yiu Memorial College in solidarity with the student.   © Reuters

HONG KONG -- The morning after one of the most violent days in months of protests in Hong Kong, hundreds of people gathered at a secondary school in a show of support for student who was shot by a police officer with a live round on Tuesday.

The black-clad demonstrators -- including students, alumni and members of the public -- held slogans condemning the police violence and cheered for the wounded 18-year-old. Local media reported the student's condition has turned from critical to stable as of Wednesday morning.

A video of the shooting, filmed by the City University Student Union and shared on social media, shows an officer drawing a revolver and firing at the protester, who collapsed on the street with his chest bleeding. This marked the first time a demonstrator was hit by live ammunition since major protests began in early June.

The shooting took place hours after a ceremony in Beijing commemorating the 70th anniversary of the founding of the People's Republic of China. It drew international condemnation, with various U.S. senators criticizing the police's actions, although President Donald Trump has not mentioned the incident.

The operator of the city's rail system, MTR, closed about 40 stations -- nearly half of the entire rail network -- on Tuesday. Stations were open as normal on Wednesday.

Late on Tuesday, Hong Kong Police Chief Stephen Lo defended the officer's action to fire at the protester, describing it as "reasonable" and "legitimate." Lo said the officer was under attack by a group of "rioters" and felt his life and his colleagues' lives were being seriously threatened.

"The officer really had no choice but to fire back," Lo said, adding that the officer had warned the protester before opening fire. He said that the police in total fired six live rounds on Tuesday on four occasions and believed only the one incident involving the 18-year-old caused injuries. 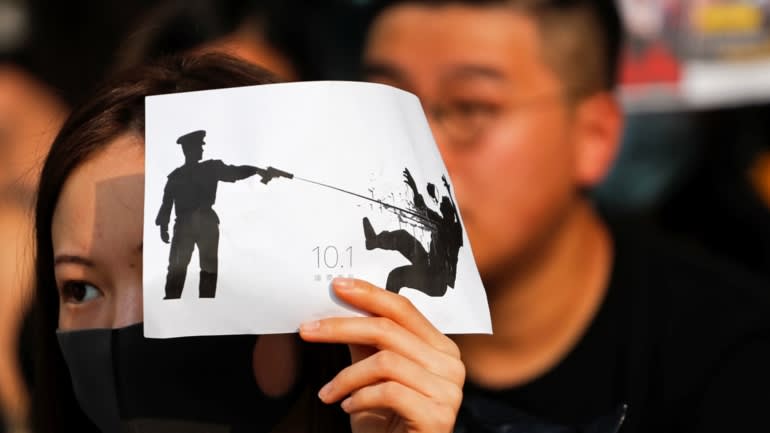 An alumna of the student's school holds up a drawing of the shooting at protest in Hong Kong on Wednesday.    © Reuters

More than 100 people were injured during Tuesday's protest, with two people in critical condition, according to the Hospital Authority.

Police said at a news conference on Wednesday that 269 people had been arrested for rioting, assaulting police, taking part in unlawful assembly and illegal possession of weapons. Thirty police officers were also hurt during Tuesday's operations.

In Central, the city's financial district, hundreds of white-collar workers staged a demonstration in support of the wounded student during their lunch hour on Wednesday. In front of a Chanel store, they chanted the five key demands being made by protesters to the Hong Kong government and sang songs denouncing police brutality.

Billy Wong, a 58-year-old bank worker, said he was "very upset" about the shooting of the 18-year-old protester.

"It's the excessive use of violence that has intensified the whole incident," Wong said, adding that the police could have fired a warning shot instead of a live round. "I think it is an act of murder."

A 24-year-old protester who gave her name as Janet said she was concerned that more such incidents could take place.

"It sets a very bad precedent," she said. "What happened in Hong Kong today concerns everyone. It's not possible that people return to work like nothing happened after a person was shot by live round."