HONG KONG -- The wave of protests that has engulfed Hong Kong over a proposed extradition law shows no sign of receding despite the authorities' decision to suspend the bill.

Now the young people who are leading the demonstrations are engaged in a game of digital cat and mouse with China's ubiquitous, high-tech surveillance network. Protesters in Hong Kong are being spurred to action by fears that the territory's freedom of speech and independent legal system are under threat.

They use various tricks to avoid leaving a trail that could allow authorities to track them down, such as sharing information on social media anonymously and not using smart cards when taking the subway. Tips on how to outsmart government surveillance are often shared through Telegram, an instant messaging app.

"Telegram is used as a major communication and broadcasting tool during the recent protests in Hong Kong," said Lokman Tsui, a professor at the school of journalism and communication at the Chinese University of Hong Kong. "It is the most efficient platform to host group chats, which can engage tens of thousands of participants at the same time."

When more than 10,000 protesters, including many students, surrounded police headquarters on Friday night, many of them received a series of messages on Telegram. One advised people to keep calm and not to use violence, while another cautioned them to "beware of 360-degree security cameras."

Telegram first gained international attention when it was used widely by anti-government protesters in Iran in late 2017 and early 2018. Because the app encrypts private messages as they are sent, it is considered a safe communication tool. Unlike other popular social media platforms such as Facebook and WhatsApp Messenger, Telegram allows anonymous communication as it gives users the option to hide their phone numbers and any identifiable personal information. "Some protesters even use 'pay-as-you-go' SIM cards to avoid leaving any trace [of their identities]," said Tsui.

Many groups, some with tens of thousands of members, use Telegram to urge people to demonstrate.

Protesters poured on to the streets on June 16. Organizers put the number at around 2 million, making the demonstrations some of the largest in Hong Kong's history. While the vast majority of people marched peacefully along designated routes, some student activist organizations and Telegram-based groups took stronger action, blocking thoroughfares and surrounding the Legislative Council building and police headquarters.

Democracy activist Joshua Wong, a leader of the Umbrella Movement, which held protests in 2014 over many weeks to demand universal suffrage, describes the latest campaign as "a leaderless movement with participants loosely connected and acting voluntarily."

On June 12, as protesters clashed with police, an illustrated list of things demonstrators should have with them, including a mask, a helmet and goggles, was shared via Telegram. People take other precautions. One 23-year-old protester told Nikkei he keeps his smartphone's location function switched off and immediately deletes any messages about demonstrations. 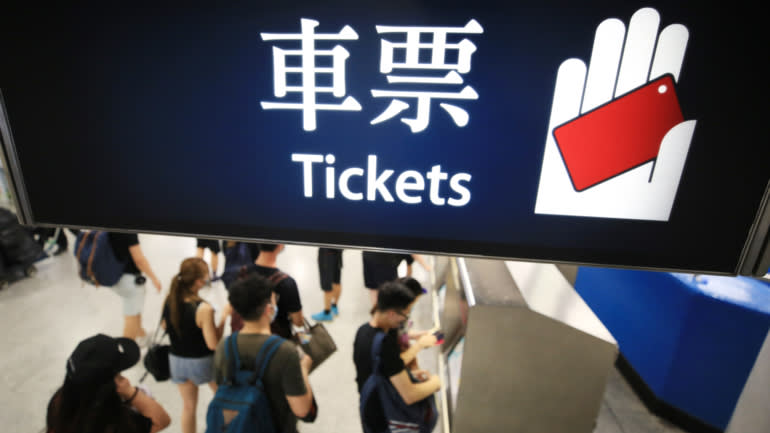 Late on the night of June 12, there were long lines in front of ticket machines at subway stations. Hong Kong residents typically use Octopus smart cards to get around town on public transport. But using an Octopus card is risky for protesters: Payment records are easily accessible and offer such information as which station a passenger entered at what time.

During the Arab Spring, a pro-democracy movement in the Middle East that began in 2010, social media was a key driver of public uprisings. Fearing something similar might happen at home, China's leaders tightened their grip on the media and other sources of information.

An estimated 200 million security cameras keep an eye on mainland Chinese citizens. Artificial intelligence-based facial recognition makes it easier to identify people caught on camera. Alarmed by the spread of such monitoring in Hong Kong, young people in the former British colony are on their guard.

One episode during the recent demonstrations has strengthened the case for caution. After a clash between protesters and police on June 12, police officers visited multiple hospitals and detained patients. Whistleblowers told local lawmakers that the identities of people rushed to hospitals were passed on to police through backdoor computer links to public hospitals.

Hong Kong authorities denied such links, but did not give an explanation as to how police officers were able to track protesters in hospitals. As a result, many injured protesters were afraid to seek medical help for fear of being arrested, according to Pierre Chan, a lawmaker and doctor at a public hospital.

The operator of Telegram said on June 12 that it was hit by a "state actor-sized" distributed denial-of-service cyberattack. The attack came mainly from IP addresses in China, according to Telegram founder Pavel Durov. Hong Kong media have reported that Beijing launched the attack in response to the Hong Kong protests.

In the same week, an administrator of a protest-related Telegram chat group with 20,000 members was arrested, even though he did not show up at the protest site.

"After the arrest, people are even more careful with the messaging app. There is some sort of white terror and self-censorship on the internet now," said Tsui, the communications professor. "Still, people in Hong Kong can enjoy internet freedom, albeit diminishing, unlike their peers in mainland China."