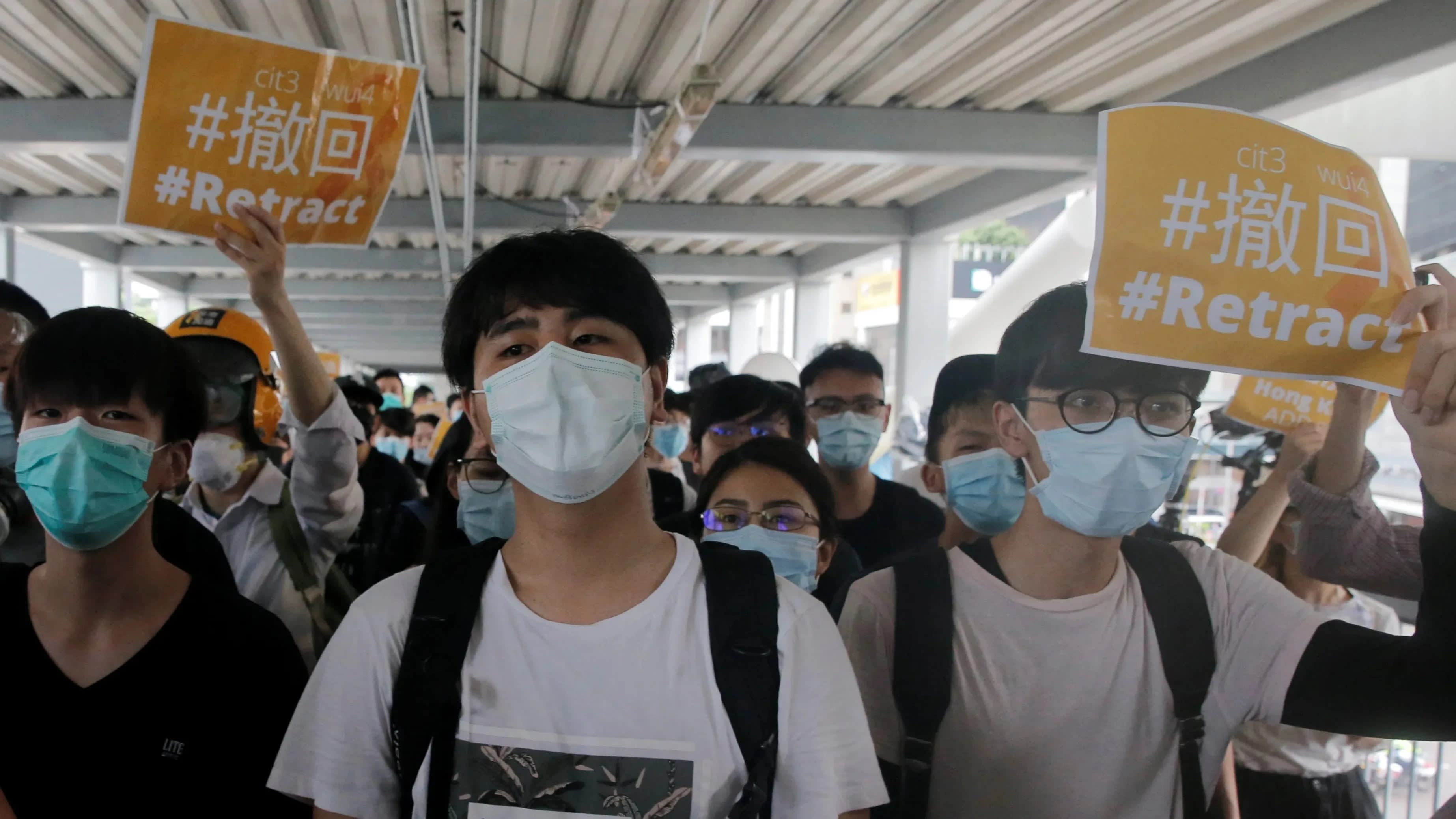 Protesters hold placards and shout slogans on a footbridge leading to the Legislative Council in Hong Kong on Thursday.   © Reuters

HONG KONG -- Hong Kong's Legislative Council will further push back the debate on a controversial law that would allow people to be extradited to mainland China, according to a parliament circular issued on Thursday.

The debate that was originally scheduled on Wednesday, will not take place until at least next week, the council, or LegCo, said. The delay comes after thousands of protesters blocked the main streets outside the government compound in the city's Admiralty district. This prompted police to fire rubber bullets, tear gas and pepper spray to disperse crowds, some of whom had hurled bricks at officers.

Alvin Yeung, a lawmaker in the pro-democracy Civic Party, told the Nikkei Asian Review that a vote scheduled for June 20 would also "most probably" be delayed. This, he said, was because the president of LegCo had budgeted for 66 hours of debate before any vote. The current legislature session is due to end on July 11 for summer recess.

Hong Kong police commissioner Stephen Lo said in a news conference on Thursday that the force used more than 150 tear gas canisters -- about double the amount used on the first day of Occupy Central in 2014. He said that some 20 shots -- including rubber bullets and bean bag rounds -- were fired to push back protesters.

Lo said the officers acted in accordance with force guidelines. He noted that the police would not seek assistance from China's People's Liberation Army, saying the forces has as sufficient manpower to contain the situation. Riot police try to disperse protesters with tear gas outside the Legislative Council in Hong Kong on Wednesday.   © AP

The protests on Wednesday paralyzed a key district of the financial hub. While main roads had reopened by early Thursday, the Admiralty subway station was shut until around 2 p.m. local time. Even though only a few dozen people remained at the protest site outside LegCo, the government said it would close its headquarters building for the rest of the week due to "security reasons."

Meanwhile, the number of people injured in the clashes between police and protesters had risen to 81 as of late Thursday, afternoon, according to  Hospital Authority data. The protests are hammering the city's reputation, with outbreaks of "lawlessness" undermining the rule of law, Chinese state media said in editorials published Thursday. The English-language China Daily said "the opposition camp and its foreign masters seem willing to oppose it for their own purposes at the expense of the city's rule of law, public safety and justice."

The extradition bill has been at the center of Hong Kong's political debate in recent months, as the government moved to plug what it calls a loophole exposed by a homicide case.

The government was not able to transfer a Hong Kong man accused of killing his pregnant girlfriend in Taiwan because of the lack of an extradition agreement with the island. Hong Kong currently has extradition treaties with only about 20 jurisdictions around the world, and mainland China, Taiwan and Macao are not among them.

Opponents of the legislation say the bill would pave the way for fugitives to be sent to mainland China, where many legal experts believe suspects will not receive a fair trial given the Communist Party's control over the courts.

The proposed law could also undermine Hong Kong's autonomy and damage its competitiveness as a financial hub.