All over Hong Kong, a colorful form of peaceful protest has been blossoming. People have been writing their thoughts, demands and encouragement onto Post-it notes, and sticking them onto walls in public spaces, creating an eye-catching and instantly recognizable mosaic.

They've bloomed on walls of footbridges and pedestrian tunnels, and on the sides of government buildings and highway pillars, with some torn down as quickly as they flowered, and others having lasted since early June.

These temporary installations are called Lennon Walls, taking their name from the graffiti-covered, peace-themed wall in Prague first painted with a picture of the late musician John Lennon in 1980.

The first Hong Kong Lennon Wall appeared on the sides of the legislature in 2014, during the pro-democracy Umbrella Movement, when major streets were occupied in the heart of the city for 79 days. Five years later, they have again become a powerful symbol in the former British colony, which has been rocked by almost two months of increasingly violent demonstrations.

The protests were sparked by a proposed bill that would allow anyone in Hong Kong to be extradited back to mainland China, while the police have continued to stoke public anger. The Hong Kong police force has been criticized for an excessive use of force and, more recently, has been accused of working with the triads, Hong Kong's organized crime syndicates. 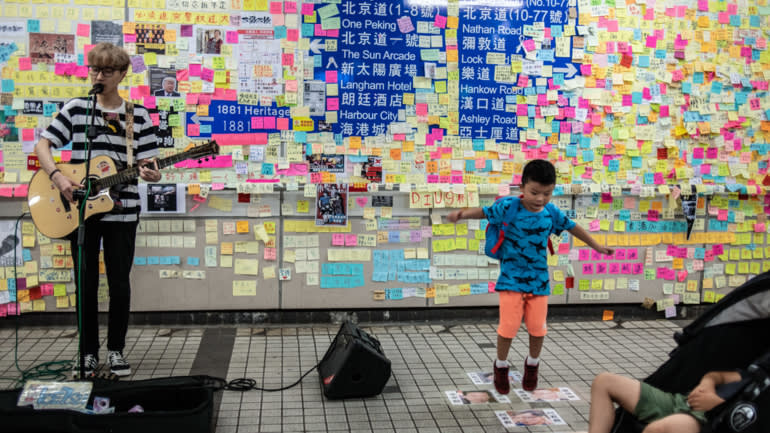 Inside the Tsim Sha Tsui tunnel that has become a Lennon Wall, a busker plays music and a little boy plays hopscotch on tiles made of the faces of Hong Kong and Beijing government officials.   © Laurel Chor

The major marches -- two of which have been attended by more than 1 million people, according to organizers -- attract a broad spectrum of Hong Kong citizens. But the street protests are usually attended by younger people and they often end in clashes with the police, who have regularly used tear gas and rubber bullets.

The Lennon Walls provide a gentle alternative for those who may not be willing or able to attend the protests, and who choose to express their views anonymously and quietly.

A small group of anonymous volunteers has embarked on a project called "Lennon Wall Hong Kong" to document the walls on social media, mapping them and collecting images not only from Hong Kong, but around the world. Supporters of the movement abroad have sent photos showing small Lennon Walls that have sprung up all over the world, including Paris, Helsinki, Brisbane and California. 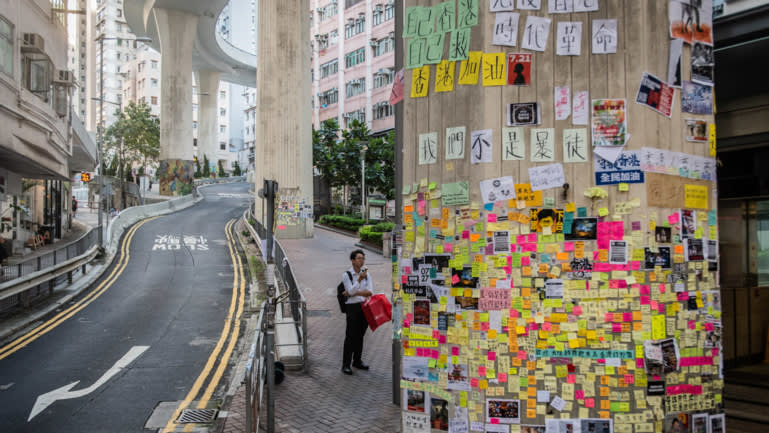 A man looks at a Lennon Wall on the side of a highway pillar on Hill Road in Sai Ying Pun.   © Laurel Chor

"There is a poetry in a Lennon Wall that captures what has happened in Hong Kong and what makes Hong Kong people special," said a project volunteer, who declined to be identified and who spoke via Instagram's messaging feature. "There is no leader that controls a Lennon Wall. There is no fixed process. Like a garden, each one grows organically. And every single person can contribute. Everyone is helpful."

Crystal, who declined to give her last name, is unemployed and has been spending a lot of time as a volunteer at the largest of the city's Lennon Walls. The Tai Po edition is an impressive public display of creative expression that has completely covered the walls of a pedestrian tunnel hundreds of feet long. Like at other walls, there are supply stations with free Post-its, tape and pens for the taking.

"I want to do my part and help protect everyone's painstaking efforts. Even if it could get cleared at any moment, that's OK," she said, explaining that she helps to tidy up and manage donated supplies. "I just want to come and help, and do what I can for Tai Po and Hong Kong." 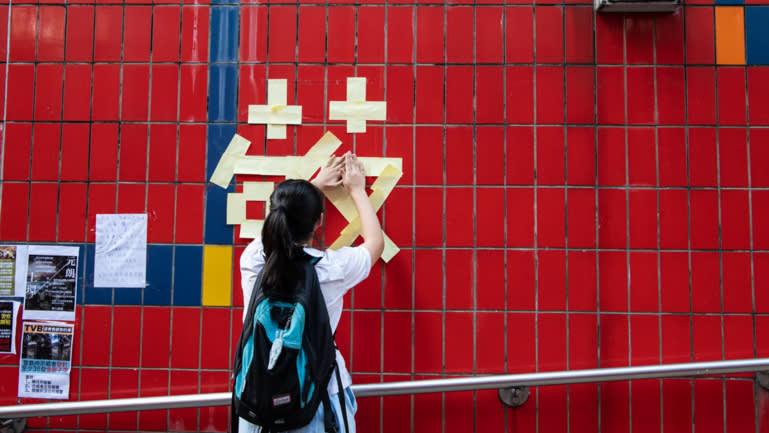 Ms. Ho (first name withheld), 14, said she was putting up a made-up character representing “dirty cops” on the outskirts of the wall in Tai Po. “I want people to know that the cops are like this, that they don’t care about people, and don’t help people, and hit us.”   © Laurel Chor

Some walls have been torn down or splashed with ink by those who disagree with the protests. During a pro-police rally, people aggressively tore down the walls on the sides of the legislature, only for it to spring up again the next day. In late July, I saw a police officer tear down a wall in Yuen Long after protests against the triad attacks turned violent.

Blue, a 21-year-old university student who withheld her last name, said she was taking photos of the large Lennon Wall in a pedestrian tunnel in Tsim Sha Tsui because the walls are "an important part of Hong Kong's history" and she knew they "wouldn't last forever."

She hopes the Lennon Walls will raise awareness among foreigners visiting Hong Kong, calling them a form of "soft power." 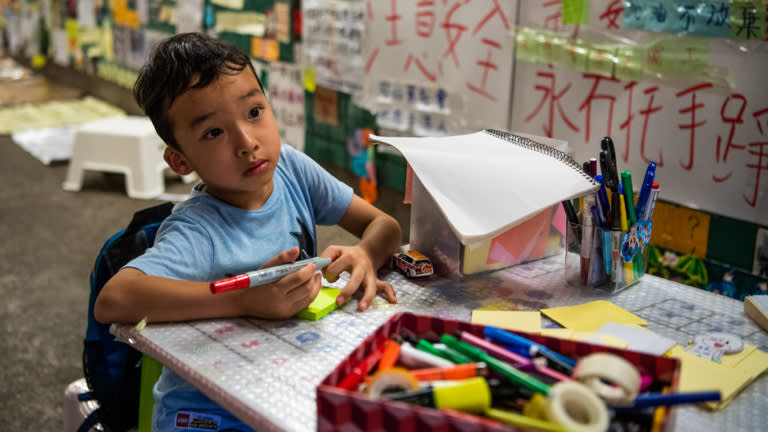 A 5-year-old boy writes a note supporting Hong Kongers with the help of his mother, Victoria (last name withheld). She says she wants to start teaching him at a young age so that he can “distinguish between right and wrong.”   © Laurel Chor

"This is a tourist spot, and a lot of people pass through it, so whether people agree with us or not, they will want to read it," she said. "Hopefully we can turn them to our side or make them sympathetic to us."

Stage manager Joyce, 27, who asked not to give her last name, was walking past the Tsim Sha Tsui wall when she decided to do her part. She removed the posters covering signs intended to give directions to pedestrians, and stuck them elsewhere on the wall.

Joyce said that the walls give her hope about the movement. "Sometimes I feel really tired, and I think that I am not doing enough," she said, her voice full of emotion. "But when you walk past a wall, you realize there are actually a lot of people with you."