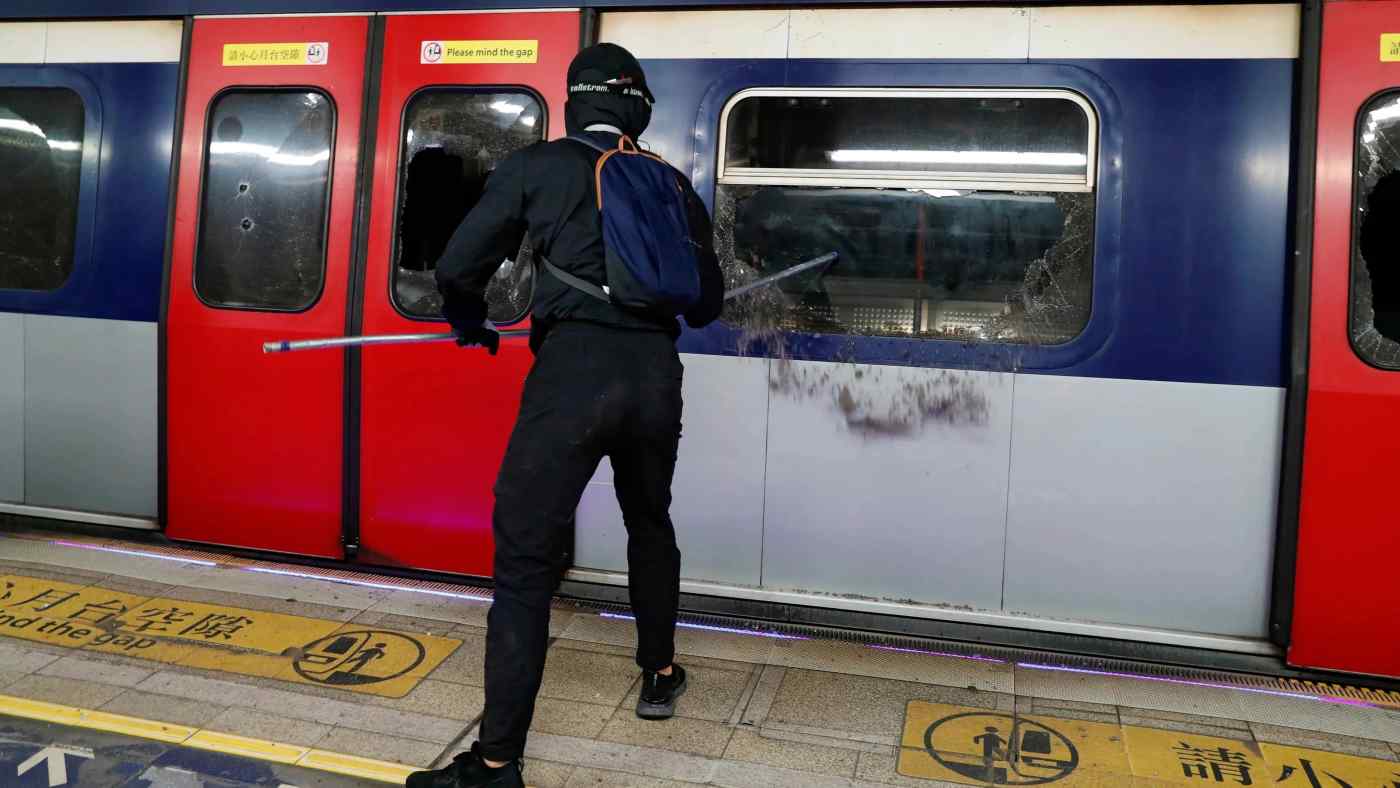 A protester vandalizes an MTR station during a protest in Hong Kong in November. Some anti-government demonstrators have stopped riding on the city's railway after it was accused by protesters of closing down stations and aiding police during pro-democracy marches.   © Reuters
STELLA WONG, Nikkei staff writerJanuary 20, 2020 12:10 JSTUpdated on January 20, 2020 13:04 JST | Hong Kong, Macao
CopyCopied

HONG KONG -- Behind the scenes of violent clashes on the streets, a new type of protest is spreading across Hong Kong, where consumers are the ones trying to make the difference.

Sharon Wong, 22, is an architectural designer who actively supports the circle by avoiding blue businesses. Since July, she stopped riding on the city's railway after its operator MTR was accused by protesters of closing down stations and aiding police during pro-democracy marches.

Maxim's Group, a Hong Kong conglomerate that operates restaurant franchises, is also on her boycott list. The chain has come under criticism after one of its founding family members, Annie Wu Suk-ching, criticized protesters at the United Nations last September.

"These companies have given up justice. They have betrayed Hong Kong and only cared about earning money in mainland China," Wong said. "I can't bear it when I think of the idea that my hard-earned money will go to the pockets of people without conscience."

She hopes her actions to boycott them can act as an economic sanction.

Wong and other pro-democracy activists make a habit of checking the political stances of restaurants and shops before deciding whether to visit. The owner of 66 Hot Pot, who identified himself only by his surname, Wong, said his business has benefitted from the yellow economic circle and has experienced a 40-50% rise in its revenue. (Photo by Takeshi Kihara)

The practice has become so widespread that mobile apps to identify shops' colors on a map have emerged. The most notable one, WhatsGap, was ranked by Google App Store as the most popular among new free apps shortly after its launch last August. Though Google later took down the app for containing "sensitive content," similar apps are available.

The use of the colors originates from the 2014 Umbrella Movement, when pro-democracy citizens changed their Facebook profile photos to pictures that showed yellow ribbons, and the pro-police camp used blue ribbons.

Wong believed the rise of the yellow economy shows that Hong Kong people are starting to realize they can create changes in society through their collective power, and help people abandon their mindset of being insignificant to politics.

Woo, another protester who prefers to be identified only by her surname, also started selecting yellow shops in October. With many protesters arrested and marches regularly banned or suspended by the police, she believes the more feasible approach for Hong Kong people to show their resistance is to target the economy.

"When shops from the pro-Beijing camp suffer great losses, they may turn to oppose the government," she said.

Some pro-democracy businesses find this yellow economy crucial to survive, as the retail industry enters a challenging time. In November, retail sales plunged 23.6% from the same period a year earlier, according to government statistics.

The owner, who was born in the 1980s and identified himself only by his surname, Wong, said the restaurant has been fully booked during lunch and dinner hours, and customers need to reserve as much as two weeks in advance. "We have operated this restaurant for over seven years, and we have never experienced such a peak in the business," he said.

He clearly shows his political affiliation inside his restaurant. A statue covered with handwritten slogans and wearing a gas mask greets customers at the entrance. Two large black flags hanging on the wall say, "Liberate Hong Kong, Revolution of Our Times." Stuffed toys of a popular protest icon, Pepe the frog, are placed on the chairs.

He said at the beginning, revenue dropped 30-40% due to the instability. It is "Hong Kong people" who have saved his business, he added, because they rushed to his restaurant after learning he was on their side.

He feels a responsibility to return the favor. The restaurant frequently makes donations to funds that support the protesters. It also regularly buys materials from other like-minded shops.

"We want to send a message to customers: After you get a discount from my shop, you can use the money to support other yellow shops, or help the movement in other ways," he said.

The restaurant also employs young protesters as part-timers. Young protesters often run out of money after buying protective gear, and some are in conflict with their pro-government parents.

He hopes there will be a day when the yellow shops get so much support they can afford to find non-Chinese suppliers.

As for the blue shops, some have suffered while others have gained.

Fulum Group, which owns restaurants widely believed to be popular among white-shirted "Fujian gangsters," posted a net loss of 63.8 million Hong Kong dollars ($8.2 million) for the April-September period last year, though it earned a net profit of HK$12.7 million in the same period the previous year. Local media reported that the Hunghom Cafe chain, another blue business, was seeking new tenants to take over its six locations. Kate Lee Hoi-wu is the owner of Ngan Loong Cafe, which features pro-police banners on its walls and recorded a 10-fold hike in revenue since it publicly declared its political affiliation. (Photo by Takeshi Kihara)

Ngan Loong Cafe, which features pro-police banners on its walls, recorded a 10-fold hike in revenue since it publicly declared its political affiliation. Wearing a blue T-shirt with the words "I Love Police," owner Kate Lee Hoi-wu said the restaurant now takes in around HK$10,000 a day.

Her restaurant was initially criticized and boycotted by pro-democracy supporters but quickly bounced back after Police Chief Chris Tang Ping-keung made an appearance there in mid-July. More police officers followed suit, and her business thrived when mainland tourists started visiting her to show support. Now, she is even planning to open a new branch in Shenzhen after the Lunar New Year.

She disagrees that all blue shops have been affected by the yellow economy, because "everyone has their own supporters." She said she believed that "color-coded" circles are not sustainable in the long run.

But Lee has paid a price for her stance. She says that she has received threatening calls and that complaints over her restaurant's hygiene standards have been filed to government agencies.

Vera Yuen Wing-han, assistant lecturer of economics at the University of Hong Kong, said not everyone joining the yellow economic circle agrees with those acts of vandalism, because they threaten personal safety and harm private properties.

She said it also reduces customers' choices and disrupts the effectiveness of the market economy, but added that choosing shops or services because of their political stance is simply the choice of customers in the free market.

Yuen said the blue shops should be mindful that the yellow economy can reallocate consumer expenditure away from them. With the low consumer sentiment, the relocation effect will constitute a threat to those blue shops, she said.

However, she cautioned that the scale of the yellow economic circle is still small and has limited effect on the overall economy. It is heavily focused on the retail and catering industries, which comprise a small portion of gross domestic product. The accommodation and food services sectors contributed just 3.4% of GDP in Hong Kong in 2018, according to government statistics.

But the yellow economy's impact has been enough to catch the attention of the authorities. Beijing's state-run People's Daily called the circle a "shame of civilization" and "doomed to be a joke." Hong Kong government officials also accused it of not helping society restore harmony.

Political commentator Bruce Lui Ping-kuen warned that the yellow economy, which is relatively small, cannot compete with mainland China. That is because even if the yellow economy grows, Beijing can easily suppress it with its far mightier economic power.

For example, it can silence dissident voices by asking large companies with business dealings inside China to fire staff members sympathetic to the movement.

But he believes the yellow economy is a real power that can maintain the movement in the long run.

"The daily expenses may not constitute a strong power, but it can unite pro-democracy activists and keep the protest momentum going," he said.