The effects of the trade war and political turmoil in Hong Kong have pushed the city into its first recession since the global financial crisis. Businesses are re-examining its close, yet volatile, relations with the mainland.   © Reuters
NIKKI SUN, Nikkei staff writerNovember 10, 2019 14:07 JST | Hong Kong, Macao
CopyCopied

HONG KONG -- When Frank Wang, founder of the world's largest consumer drone company, reflected on his career a few years ago, he underscored the crucial role that Hong Kong had played in his success.

For the native of Hangzhou, who left a university in China for the Hong Kong University of Science and Technology in 2003, the city offered the essentials that the mainland lacked to kick start his company, DJI.

With two HKUST classmates and a scholarship, Wang arrived in Shenzhen in 2006 and launched DJI, which is now valued at $15 billion and is a symbol of the southern Chinese city's innovation prowess.

"I would not have achieved what I achieve today if I had not come to Hong Kong," Wang told InvestHK, a government investment promotion agency. Hong Kong remains a key location for his company to expand its international business.

Hong Kong traditionally has served as a window of opportunity for many Chinese companies in advanced technologies, and the city has achieved economic prosperity playing the role of middleman between a rising China and the world. However, as the effects of China's trade dispute with the U.S. and local political turmoil pushed Hong Kong into its first recession in a decade, businesses are re-examining the city's close, yet volatile, relations with the mainland. Anti-government protesters in Hong Kong's Central business district. The economy shrank 3.2% in the July-September period compared with the previous quarter, the worst performance in a decade.   © Reuters

"The double-whammy of the U.S.-China trade war and local protesters is not only weighing on short-term economic performance, but also deferring long-term business decisions -- like hiring and investment -- across all industries," said Kelvin Lau, senior economist at Standard Chartered Bank. He expects growth to remain anemic.

Despite poor economic data, Lau said that financial markets remain resilient. Both the exchange rate of the Hong Kong dollar, which is pegged to the U.S. dollar, and benchmark interest rates between banks show that there is little signs of major capital outflows and liquidity tightness.

But that might not be the case in the long run. Other analysts anticipate structural changes in Hong Kong's economy amid persistent external and internal headwinds.

"I think Hong Kong's role as a middleman would be affected," said Tommy Wu, senior economist at Oxford Economics, as multinational companies could choose other cities in Asia over Hong Kong as an investment destination. "Political uncertainty has risen and will remain a concern even after an eventual end to the current unrest," he said.

The accelerating relocation of supply chains outside China due to the trade war will also hinder Hong Kong's role as an international trading hub, Wu said.

Hong Kong's economy shrank 3.2% in the July-September period compared with the previous quarter, the worst performance since the global financial crisis in 2009. Exports have declined 11 consecutive months as of September, while investments fell four straight quarters.

Hong Kong has been an important port for international trade going back to the colonial era under British rule. But the volume of mainland goods going through Hong Kong skyrocketed since China set out on the path of economic reform more than a generation ago. Its share of Hong Kong's trade rose from 9.3% in 1978 to 50.4% in 2018, according to government statistics. 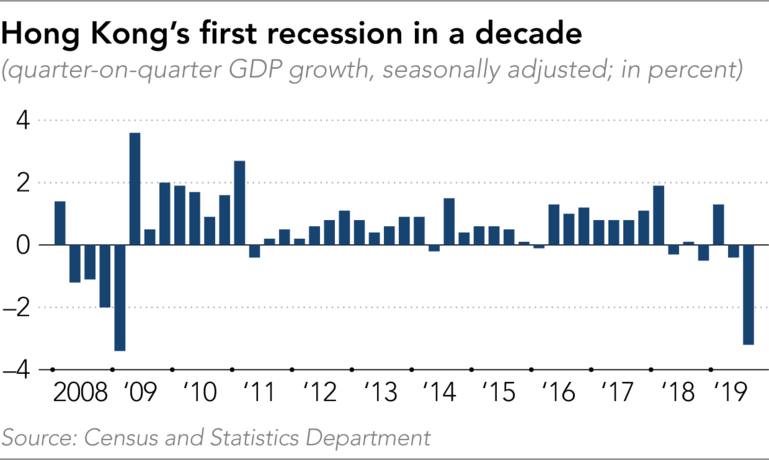 Thanks to thriving international trade, Hong Kong has been able to develop an export-oriented economy with four pillar industries: financial services, tourism, trading and logistics, and producer and professional services. Those industries contributed 57.1% to gross domestic product in 2017, and they provided about half of the city's employment.

However, economists say that some of the traditional growth engines are losing momentum as China's market reforms gain traction, while emerging industries are still far from providing meaningful support to the economy.

Simon Lee Siu-po, a senior lecturer at the Chinese University of Hong Kong's business school, said logistics and trading will suffer the most, as the rapid expansion of ports in southern China has already taken substantial business from Hong Kong, a longtime entrepot between the mainland and the rest of the world. Government data also show that the contribution to GDP from trading and logistics is down from 25.5% in 2007 to 21.5% in 2017.

"The allure of Hong Kong as a destination has deteriorated in the eyes of the mainland public following the unrest and anti-mainland vandalism and violence," Wu said.

The several rounds of tax cuts on imported consumer goods in China, as well as a crackdown on parallel traders -- people who purchase products in Hong Kong and sell the goods across the border for a profit -- will also reduce Hong Kong's attractiveness.

However, both Lee and Wu believe that the city will still retain its advantages as a middleman in finance and professional services.

Wu said that Hong Kong's strength lies in its rule of law and capital convertibility, which no mainland city can match in the short-term due to regulatory restrictions such as capital controls. But Lee said the mainland could catch up in providing other professional services.

Despite the current political uncertainties, Hong Kong could rely more on the mainland for future growth because it would be difficult for Beijing to find a replacement as effective as Hong Kong.

"Places like Singapore or Zurich do not have the same ecosystem as Hong Kong," said Alicia Garcia Herrero, Asia-Pacific chief economist at Natixis. "In the short run, Hong Kong cannot be challenged by any of them," because there are not enough Chinese players to support initial public offerings and bond issuances.

But Herrero said that the accelerating economic and political integration between the mainland and Hong Kong will inevitably cost the city's special status granted by the U.S. on the basis of its rule of law. "The special status is bound to disappear over time," she said.

To prevent that from happening, local business tycoons are urging the city's young generation to actively engage with the mainland over Hong Kong's future, rather than resisting it, because its fate is bound to China.

"If they worry about the future, the correct way is not do less with China, because if you do less with China, by 2047, the two systems will disappear anyway," Bernard Chan, a local businessman and convener of the Executive Council, the top-level advisory body for Chief Executive Carrie Lam, said in an interview with Nikkei Asian Review.

The U.K. handed over Hong Kong to China in 1997 under a "one country, two systems" legal framework lasting 50 years.

"The only way we can extend beyond 2047 is that we continue to find a purpose to serve China that China does not have," Chan said, adding that Hong Kong's future is serving the mainland market. "China will keep changing. We also need to change and improve ourselves. You can't be the middleman if you don't know China."