HONG KONG -- A spat between the Hong Kong police and the city's public broadcaster over a comedy show upended a decades-old industry practice this week and raised fresh concerns about free expression.

A recent episode of "Headliner," RTHK's satirical current affairs show, sparked the controversy when the hosts made jokes implying that the police were hoarding more protective gear than front-line medical staff during the new coronavirus outbreak.

The city's communications authority received more than 200 complaints -- including a formal one from the police. On Wednesday, the watchdog abruptly scrapped a requirement for free-to-air stations to show RTHK-produced programs, citing efficiency. This rule had been in place for about 30 years.

Police Commissioner Chris Tang also published a complaint addressed to RTHK's top executive, saying the show was "misleading" and could "lead to a loss of confidence in the force."

"If the public loses confidence in the police force, criminals will have a chance to take advantage of it, and Hong Kong's law and order will be difficult to maintain," Tang wrote.

That confidence has been sorely tested by the police and government response to the city's pro-democracy protests, which raged for months until fears of the coronavirus somewhat subdued mass demonstrations, although sporadic clashes have persisted.

Even before the "Headliner" episode, RTHK was taking flak from pro-establishment lawmakers over its critical stance toward the government -- despite relying on public funds. Supporters of the government staged small protests outside the broadcaster's headquarters, calling for greater official control of its content.

But now that the communications watchdog has relieved other stations of their obligation to show RTHK programs, scholars and pro-democracy lawmakers are warning of a stifling effect on freedom of speech. 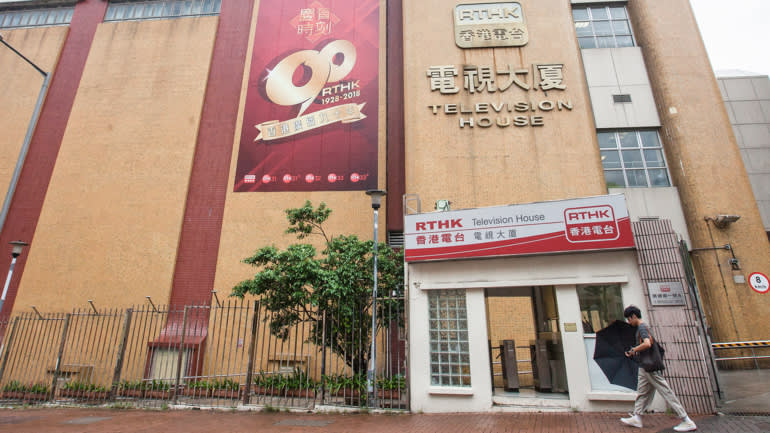 Even before the "Headliner" episode, RTHK was taking flak from pro-establishment lawmakers.   © EPA/Jiji

Until this week, free-to-air stations in Hong Kong were required to run up to 3.5 hours of RTHK programs weekly. The rule was introduced back when RTHK, established in 1928, did not operate its own channels.

The broadcaster's shows are clearly popular: Seven of local viewers' 10 favorite programs of 2018 were produced by RTHK, according to an annual survey by the University of Hong Kong. "Headliner," which has been on the air for 31 years, always makes the top-20 list.

The communications authority, however, said in a statement that lifting the requirement will free up airtime for "more efficient use" and thereby "provide more diversified TV program choices to the public."

RTHK itself said it did not object to the move and would continue to broadcast its programming on its own channels. Hong Kong's biggest TV station TVB, welcomed the decision and said it would stop showing RTHK programs on Thursday.

But the decision has also drawn pushback.

"The sudden change in policy, without the due process of public consultation, is obviously an effort by the government to undermine RTHK's role," said Fu King-wa, an associate professor at the University of Hong Kong's Journalism and Media Studies Center. He added that the government has previously applied pressure on RTHK by cutting its operating budget.

Unlike other public broadcasters such as the U.K.'s BBC and Japan's NHK, which are primarily funded by license fees, RTHK is directly supported by annual government funding.

In a way, Fu sees the row benefiting RTHK. "We are immediately seeing netizens calling for the public to watch more of its programs and subscribe to its YouTube channels," he said. "In the era of the internet, stripping a broadcaster of terrestrial airtime is not so effective."

Still, Charles Mok, a pro-democracy lawmaker who chairs the Legislative Council panel on information technology and broadcasting, called the authority's decision "regrettable," as it deprives RTHK of opportunities to reach a wider audience.

RTHK's program staff union has vowed to press on. "It's a war against humor," the union said in a Facebook statement. "We are living in an eventful time, but our colleagues will keep upholding values of editorial independence and freedom of speech."