HONG KONG -- Rising anti-China sentiment among Hong Kong's protesters has made investment banker Joanna Li so anxious that she is thinking about packing up and leaving the city.

"When I came to Hong Kong 11 years ago, I felt that it was a very open society," Li, 33-year-old mainlander, told the Nikkei Asian Review. "But now there has been more and more resistance against mainlanders. This is a sign of a society that is going downhill."

Diverging political views among her professional colleagues have become so apparent that Li says even her workplace feels uncomfortable.

"Although we avoid talking about it at work, I can still feel their emotion that they know we are different," Li said.

For decades, tens of thousands of mainland professionals like Li have flocked to Hong Kong as Chinese companies took advantage of the city's access to international markets.

With around 20,000 mainlanders approved to live and work in Hong Kong each year, the upsurge in violent attacks on stores and businesses linked to Beijing -- dozens of companies have seen their offices defaced, trashed and even set on fire by hardline protesters over the past month alone -- is forcing many to rethink their commitment to the former British colony.

The increased attacks have already hit office rentals. According to data supplied by property agency Cushman & Wakefield, only 14% of office space in the prime financial district know as Central has been leased to mainland tenants in the nine months to September 30, compared to 58% last year and 57% in 2017.

That's a sharp reversal of what was previously considered to be the unstoppable momentum of mainland companies setting up offices in Hong Kong since the semi-autonomous enclave was returned to China in 1997.

In the 20 years to 2017, the number of mainland companies registered in Hong Kong has doubled to more than 4,000, with the total assets they control increasing more than tenfold to 20 trillion Hong Kong dollars, according to data released by the Xinhua News Agency.

"Mainland companies are likely to slow, or even stop, their expansion into Hong Kong given the current situation," said Simon Lee Siu-po, a senior lecturer at the Chinese University of Hong Kong's business school. 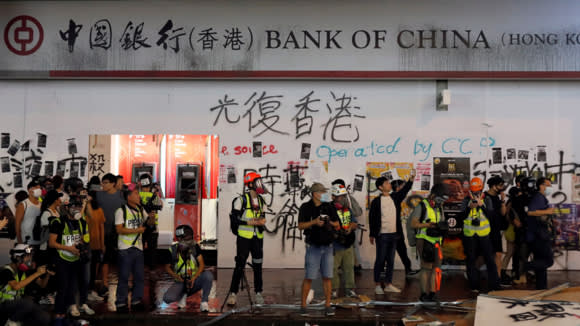 A Bank of China branch, which was vandalized during an anti-government protest in Hong Kong on October 20.   © Reuters

Increased attacks on Chinese companies could also cause a spike in unemployment if mainland companies started downsizing their Hong Kong operations, Lee said.

New data on Oct. 31 confirming that the Hong Kong economy had tipped into recession, shrinking 3.2% in the July-September period compared with the quarter before, will only exacerbate those concerns.

One executive of a Beijing-headquartered technology company told Nikkei that he was so fearful about being targeted by protesters that he had removed the company logo from the directory at the company's Hong Kong offices.

"I have to prepare for the worst," said the executive, who requested anonymity, adding that he had even gone so far as to refit the company's entrance with frosted glass to prevent passersby from peering inside.

"Whenever I see someone in black, I either keep quiet or speak English," the executive said, referring to the clothing color adopted by the protest movement.

Mainland companies that have borne the brunt of the protests now in their fifth month include Bank of China (Hong Kong), Beijing-headquartered Chinese medicine chain Tong Ren Tang, and electronics company Xiaomi, which is yet to reopen its flagship store after it was torched in October.

In Shatin district, franchise stores of popular mainland brands including Lenovo and Huawei have also been attacked.

One Lenovo shop assistant at a Shatin shopping mall told Nikkei that business was down 70 percent due to the loss of mainland customers staying away because of the protests.

While most demonstrators have been concerned with Beijing's direct influence on Hong Kong's government, another reason for the outpouring of resentment toward Chinese businesses can be found along Nathan Road in Mong Kok.

Once populated with many small family owned businesses, the area has become such a popular destination for Chinese tourists that those local stores have been pushed out by jewellery store chains, pharmacies, and electronic stores serving mainland tourists, contributing to what many locals say is a loss of the area's unique character.

"By spraying graffiti and other messages on the gate [of shops backed by mainland companies], we can raise public awareness towards their hidden influence on Hong Kong," one 24-year-old hardcore protester, who only gave his name as "Brian," told Nikkei. "This way, we remind our supporters not to fund their businesses, or simply deliver a message that we don't welcome them here."

Still, not all mainland companies can afford to abandon Hong Kong and many of those who plan are stepping up security measures.

The Industrial and Commercial Bank of China recently put up iron walls to guard the front gates of all its branches, even in districts that have barely been scratched by the protests, while Bank of China and state-owned logistics company China Cosco Holdings have started asking employees to stay away from offices located near protest sites on weekends.

Frontline workers at Lenovo and Tong Ren Tang also told Nikkei that management had started instructing them to close their branches early if protesters started gathering nearby. 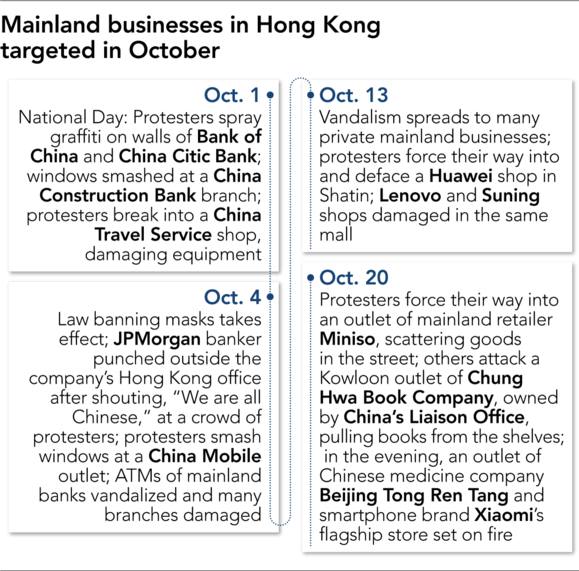 "I don't think many mainland companies would have expected this kind of backlash a year ago," said Benjamin Cavender, managing director at China Market Research Group. "For years, mainlanders have felt that a subset of the Hong Kong population looked down on them but most did not expect to see violent action taken against companies or stores."

For many office workers, the rising political uncertainty is starting to undermine Hong Kong's key strengths, such as its more mature legal framework and infrastructure compared to the mainland, one 26-year-old securities trader told Nikkei.

He said the social unrest is also highlighting the city's weaknesses, especially its overdependence on the finance and property industries, weak local government and often insufferable living conditions -- as well as the serious identity crisis gripping local people.

Reflecting on her decade in Hong Kong, Joanna Li says that for her, the ultimate test of a progressive society is whether it can become more inclusive.

When she first arrived in Hong Kong she couldn't speak a word of the city's predominant Cantonese dialect, yet that didn't seem to bother anyone. Now, she is not so sure.

"I don't even want to raise my kids here," she said.