From comics to poetry, creations are cleverly and constantly delivered to keep the movement alive Perry Dino works on an oil painting on June 12 shortly before being engulfed in tear gas. "It’s invaluable," said the artist. "Not many paintings have tear gas as a raw material." (Courtesy of Taylor Ng at Chick Chack Studio)

HONG KONG -- When artist Perry Dino set out into the streets on June 12 with a paintbrush and canvas to capture images of Hong Kong's nascent protest movement, he found himself working with an unexpected new material -- tear gas.

The police had fired over 240 rounds of the noxious chemical to disperse the thousands of black-shirted demonstrators who had surrounded the legislature to protest a controversial extradition bill, and Perry, perched on a nearby flyover, was suddenly choking on the poisonous clouds filling the air. It wasn't his safety that he was concerned about, however.

“All that was on my mind was how to protect the canvas. It’s invaluable. Not many paintings have tear gas as a raw material,” said the 53-year-old.

Dubbed the “be water” movement -- a reference to a mantra made famous by martial arts master Bruce Lee -- the Hong Kong protests are characterized by their speed, adaptability and unpredictability. Amid the unrest, various forms of art have blossomed as the pro-democracy demonstrations enter their 12th week.

Perry has been on the front lines of local protest movements since 2012, using his art to portray events ranging from the annual June 4 Tiananmen vigils to the 2014 Umbrella Movement that paralyzed traffic in Hong Kong’s central business district for 79 days. Perry has been painting images of Hong Kong's protest movements since 2012. His work is not for sale, however, because he does not want it to "fall into the wrong hands." (Photo by Michelle Chan)

But none of his artwork is for sale. “I fear if my work fell into the wrong hands, our next generation wouldn’t be able to see it again,” he said.

Week after week, the father of two has witnessed firsthand the increasingly confrontational rallies and rendered into art some of the most dramatic episodes of Hong Kong’s largest mass movement since it returned from British to Chinese rule in 1997.

“One day, when we eventually win democracy, I hope my work can be exhibited in museums where our kids can grasp the full picture of what happened,” Perry said.

Throughout the summer, Tammy Ho, the editor of Voice & Verse Poetry Magazine, has been writing poems inspired by the series of rallies in the city, and has encouraged others to do the same.

Ho, a professor of English literature, has called for public submissions of Chinese and English poems by anyone, anywhere, who has found his or her voice in the movement. In late July, a special “extradition” issue for the magazine was published, featuring poems from Hong Kong, Taiwan, Singapore, Malaysia, London and elsewhere. 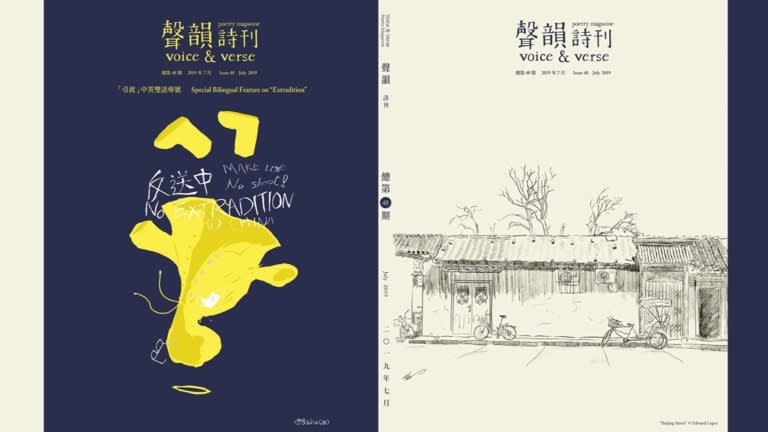 “To our surprise, we have received a lot of submissions by young, beginner writers this time,” Ho said. “This is something that they feel strongly about so they are emboldened to write.”

Just as ancient Chinese poetry was often used as a medium for subtle, sometimes sarcastic, commentary on the politics of the day, poetry today can double as an unofficial record of current events, “like photographs,” according to Ho.

“Poems have the unique ability to propel readers to think differently," Ho said. "The meaning of poems differs every time we revisit them. It’s less direct but also very upfront.”

On weekends, people walk the streets in the fierce sun
on the brink of fainting --
grey sweat comes down to their ankles
when a river of heads chants add oil.
At least one in seven people choose to boldly speak
a forbidden language of signs, posters, and videos;
of hope, metaphors, malls, and proliferating
Lennon Walls. The city I live in is no longer
only office buildings with glass fronts
or identical shops that sell identical
things. It is a city of diverse limbs
that each know their direction --
wherever they are needed, they go.

To political cartoonist Cuson Lo, protest art is central to the movement's ever-increasing momentum. His cartoons, well-known for their caricatural style and vivid colors, are ubiquitous among the city’s Lennon Walls -- footbridges, pedestrian tunnels and other public spaces that people have covered with colorful Post-it notes containing messages of support for the protesters. 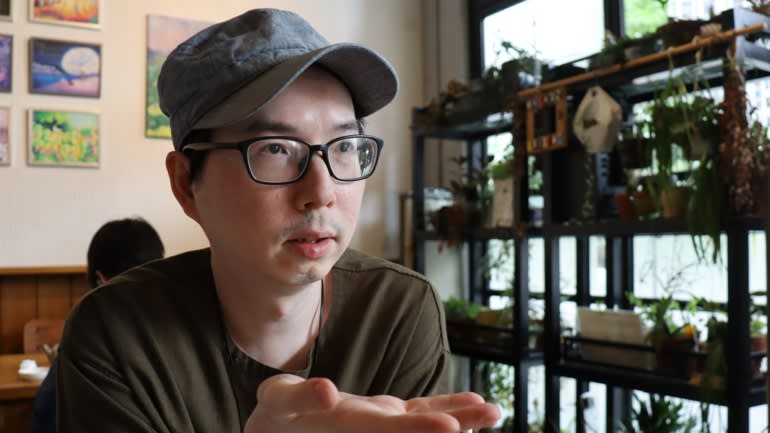 These pop-up installations have morphed into mini-art galleries showcasing the work of local artists. “My work is usually found in newspapers and on social media, but after some of my followers put my drawings on Lennon Walls, I feel like I have penetrated a vast new layer of audience,” said the popular cartoonist.

Lo said these comic-style illustrations have played an important role in the movement, particularly in raising awareness among those who were once indifferent to politics. “Every passerby, young and old, can easily understand the message,” said Lo. “These images are much more contagious than news and texts.”

Still, not all creators want their names to appear in these “galleries” at a time when people in the Asian financial hub are under increasing pressure from employers to steer clear of politics. A 25-year-old graphic designer, who would give her name only as Wing, is one of the many anonymous contributors to the protest artwork that has spread across the city. 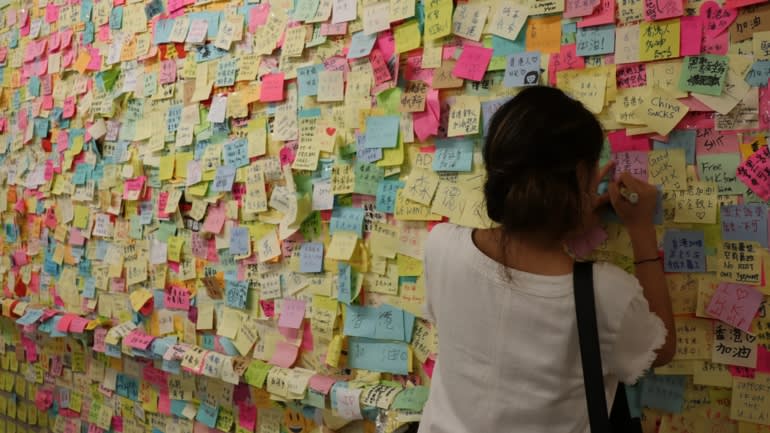 Wing, 25, above, has found an outlet for protest in Telegram, a messaging app that enables her and other graphic designers to distribute their resistance art anonymously. (Photo by Michelle Chan/poster via Telegram)

She and hundreds of other members of Telegram, an anonymous messaging app widely used by protesters, have spent their days and nights creating promotional materials and propaganda for the stream of protest events that have taken place every weekend since early June.

They send out leaflets and posters through Telegram channels -- the largest one currently has about 70,000 subscribers -- and these materials are then shared via social media, handed out on busy streets or affixed to Lennon Walls. To broaden the reach, commuters also distribute flyers via AirDrop, an iPhone function that enables users to share files offline, in subway stations and crowded shopping districts.

The ability to “be water” is shown not only in the fluid way in which protesters spread their messages, but also in how they create the content in the first place. Wing said they design graphics tailored to people from all walks of life, from millennials and baby boomers to expats and mainland tourists.

“We cannot just stay inside the echo chamber," she said. "We must adapt to their tastes in art in order to solicit support from people beyond our social circle." Public spaces throughout Hong Kong have become pop-up galleries for protest art and messages of resistance. (Photo by Michelle Chan)

Many locals have described creators like Wing as the movement's “publicity department.”

“Some of us are professional designers, some are art students and some are simply amateurs. It’s just an open platform where everyone can submit their work,” Wing explained. “Collective intelligence is the essence of this leaderless movement. All participants can utilize their expertise and do their part.”

For Sampson Wong, who teaches at the Hong Kong Academy for Performing Arts, analyzing the protest art has been a headache at times because “the artwork blooms and vanishes every minute.” He built the Umbrella Movement Visual Archive to record art pieces that flowered during the mass sit-in five years ago, but he's finding it difficult to do the same this time. 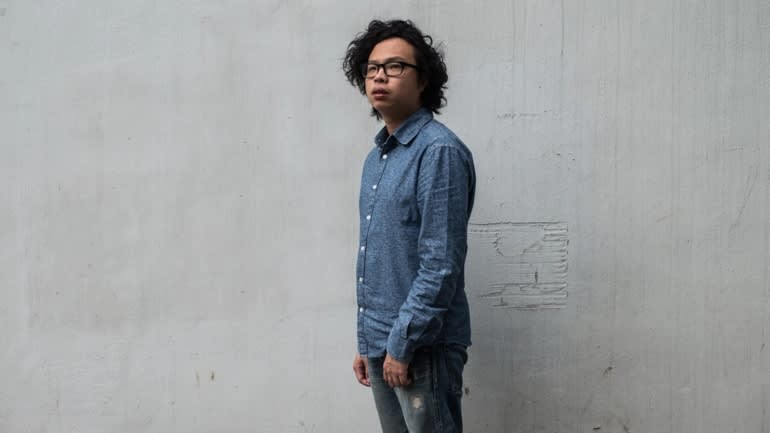 Sampson Wong, a scholar who created a "visual archive" for the artwork of the Umbrella Movement, sees the "be water" movement itself as a form of art. (Courtesy of Sampson Wong)

“The philosophy of 'be water' has given rise to short-lived yet powerful artwork, both tangible and intangible,” said Wong, citing examples of pop-up street graffiti, hand signals invented by protesters to communicate in the field, and how protesters respond when hostile passersby destroy Lennon Walls: They stick memos onto their clothes and turn themselves into “mobile Lennon Walls” instead.

“Art is the process of breaking rules and innovating new ideas," Wong said. "In this sense, the protest itself is already a form of art to me."