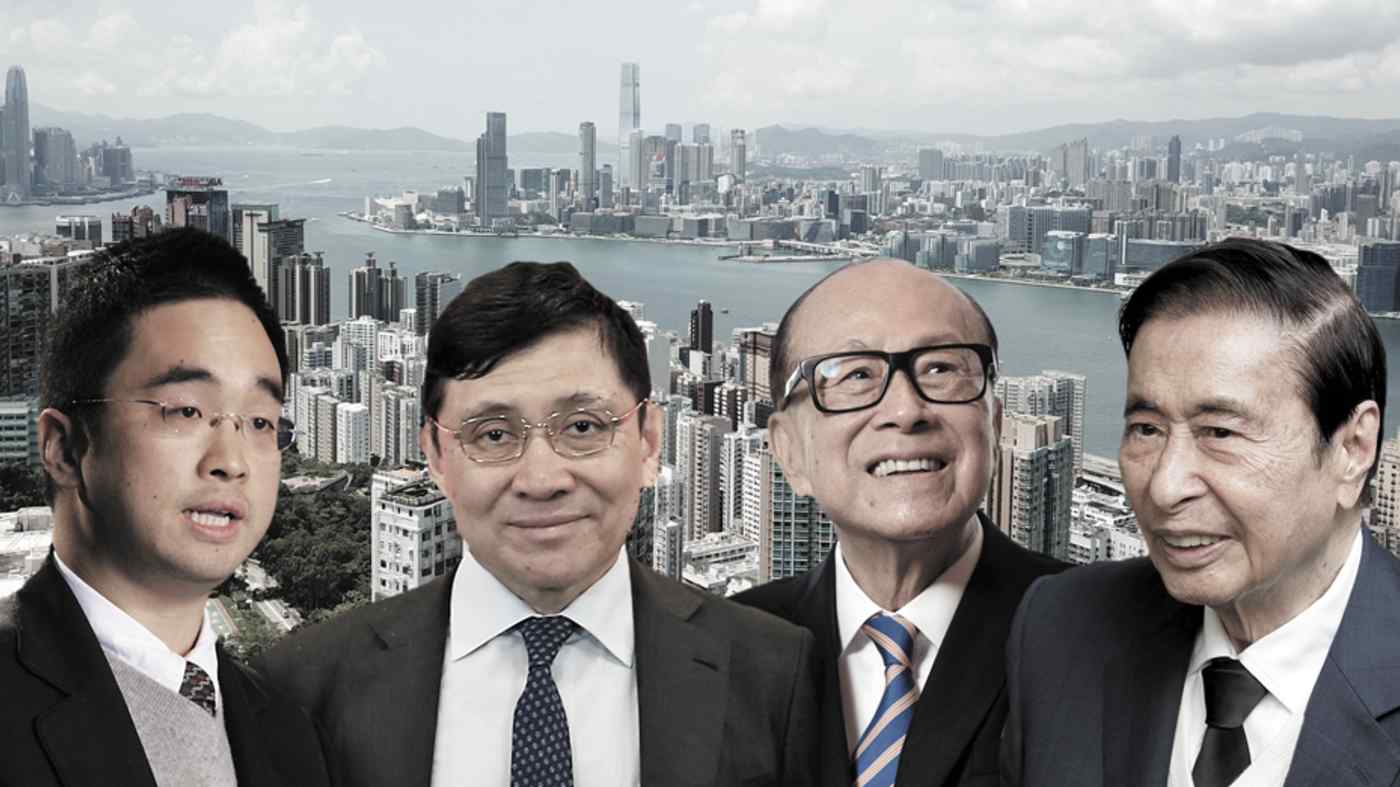 HONG KONG -- Hong Kong's real estate tycoons are belatedly learning the merits of inclusive capitalism -- but only with a prod from Beijing.

"In the past, companies only talked about [creating] shareholder value," Adrian Cheng, designated heir to the New World Development property empire told reporters last month. "In the future, I think we need to think more about stakeholder value."

Vowing to donate a sixth of his family's vast agricultural land holdings, or three million square feet valued at HK$3.4 billion ($434 million), Cheng outlined a plan to build homes for the underprivileged.

While calls for democratic inclusion and investigations into police brutality have ranked high on the protest movement's list of demands, authorities were more concerned by the large-scale displays of violence being deployed by protesters acting as if they had nothing to lose.

Best summed up by a line of graffiti painted on a city wall during this long, hot summer of unrest -- "7K for a house like a cell and you really think we out here are afraid of jail?" -- that sentiment is to a large extent true.

With HK$7,000 being the monthly rent one can expect to pay for flat the size of a prison cell, more than half the monthly salary of HK$12,000 for most university graduates.

The extraordinary influx of capital into the former British colony over the last 50 years has created such a yawning wealth gap that not even the city's professional middle classes can today afford to enter the property market.

All of which has started to unnerve Hong Kong's overseers in Beijing.

In a rare move, several Communist Party mouthpieces last month singled out the housing shortage as a key reason for the turmoil that one official has described as the worst crisis since the semi-autonomous enclave was returned to China in 1997.

"To solve the problems of people's livelihood, it's time for property developers to show their utmost goodwill instead of just minding their own business, hoarding lands and earning the last penny," thundered one People's Daily editorial.

The group announced that it was considering lending about 100,000 square feet of farmland to the government to build " transitional housing", as well as donating land to various charities.

Not to be outdone, a spokesman for the Kwok family's Sun Hung Kai Properties said that while accusations that the family had engaged in land hoarding land were "unfair" and "untrue," the group was nevertheless "keen" to support the government's attempt to increase the supply of affordable housing.

Sun Hung Kai Properties' self-sacrifice nevertheless came with layers of get-out clauses: The land could only used for public housing and could not be put to public tender in future.

"They hope to let the society know that they have done something for alleviating the problems," said Victor Zheng, assistant director of the Hong Kong Institute of Asia-Pacific Studies.

Zheng added that Hong Kong's powerful families had "to a very large extent contributed to the current inherent social problems" after benefiting from decades-long monopolies property and key utilities.

According to the latest Gini coefficient, a widely used index to measure income disparity, Hong Kong had reached an all-time high at 0.539 in 2016, well above passed 0.4 level that the United Nations has defined as "alarming."

Another Hong Kong government study indicated that the richest 10% of households earned on average 44 times more than the poorest 10%.

"It is time to let the property tycoons know that the rising Gini coefficient and worsening social problems may require them to ultimately pay the price," Zheng said. "They need to do more instead of less."

For major developers who have accumulated extensive mainland portfolios over the years in order to ride the growth wave of the world's second largest economy, the consequences of not satisfying Beijing can be enormous.

In the year to June 30, mainland China contributed 32.45% of revenue for New World Development and 7.83% for SHKP. The figure was 21.33% for Henderson Land in the first six months of the year. And that proportion is only expected to get bigger with so many projects in the pipeline.

"The donation will be viewed favorably by the central government as such gestures are conducive to easing the social tensions," said Phillip Zhong, an analyst at Morningstar Investment Management. "And the political value is important," he said, adding that in return, they could expect the government to accommodate other, more commercially valuable projects.

Conspicuous by his indifference to Beijing's foot-stamping was Li Ka-shing, Hong Kong's richest man and the founder of the multinational conglomerate CK Hutchison Holdings.

Stressing other donations Li has made toward education and supporting small businesses, a spokeswoman for Li's property vehicle CK Assets Holdings told Nikkei Asian Review that "building houses on farmland is a time-consuming project and it will take long time to benefit the people in need."

After Li sold a string of mainland properties over the past few years, bringing down the mainland contribution to CK Assets' bottom line from 48% in 2016 to just 13% in the first half of this year, Li's decision not to follow Beijing's lead becomes more understandable.

Despite the People's Daily blasting him as "ungrateful" and questioning his patriotism, Li has brushed off the criticism as "ridiculous and illogical". And given the political and policy uncertainties across the border thanks to the trade war with the U.S., Li's sell down of his mainland assets looks even more prescient.

Some are even questioning whether the sudden generosity of property tycoons can actually help ease the housing shortage.

"Developers are likely to select farmland with minimal commercial value, either due to zoning or lack of infrastructure.. and the farmland conversion has generally been a long and difficult process," said Morningstar Investment Management's Zhong. He expects little impact to companies' profitability in the near term.

Still, with the current political winds shifting against them, trying to bargain with Beijing with might not help the tycoons get what they want either.

"What Beijing needs them to do now is to make a sacrifice to balance the interests of society," said Joseph P.H. Fan, professor of finance at the Chinese University of Hong Kong. With the central government now more aware of the outsized influence exerted by Hong Kong's elite, Beijing can be expected to pay much closer attention.

"Those families' interest is deeply intertwined with China and Hong Kong," Fan said "Whether [the successors] like it or not, how willing they are to accommodate Beijing's requests will determine the fate of their families."