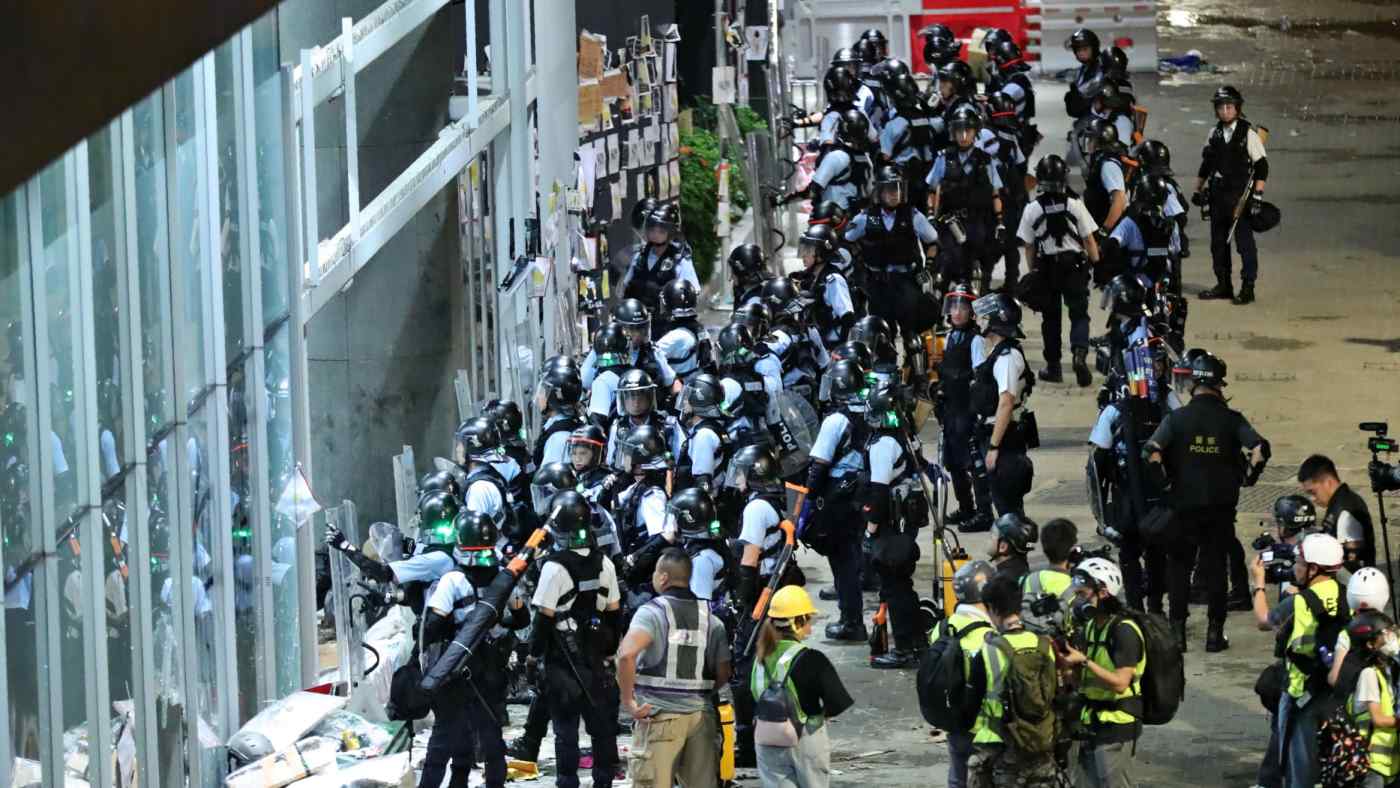 Hundreds of protesters with makeshift shields had broken into the LegCo building late Monday, bringing in materials, railings and other debris to set up barricades inside the building. Some daubed graffiti on the walls.

Demonstrators, many in their teens, clad in black T-shirts used carts and metal poles to smash through windows at the parliament building, while police in riot gear stood on the other side of the glass doors. Other protesters hurled eggs, plastic water bottles and cardboard signs into a secure area behind high gates and walls, where police were positioned.

Protesters issued a statement requesting that Hong Kong Chief Executive Carrie Lam directly responds to the demands of the people, and prevent any "crackdown on the public demands and avoid any injury."

The breach came after hundreds of thousands of people marched peacefully through the city's streets demanding the retraction of a controversial extradition bill on the anniversary of the city's handover to China from Britain. Protesters had demanded that U.S. President Donald Trump address the issue directly with Chinese President Xi Jinping at the Group of 20 summit in Osaka over the weekend, but the American leader made no mention of the issue in a news conference after the meeting. "As the people's demands continue to be ignored, protesters will put the pressure on the government," Ray Chan Chi-chuen, an opposition legislator, told the Nikkei Asian Review. "Some of them, especially the youth, will seek to escalate, and it's entirely understandable."

Chan warned that "violence and bloodshed will become more common," and said that "the government is responsible for the increase in civil strife."

Before the breach, protesters shouting "Free Hong Kong!" and "Democracy Now!" poured onto the streets of key business and commercial districts, calling for Lam to step down. While the size of the crowd had yet to be determined, two recent marches through a similar route drew up to an estimated 2 million people, according to organizers.

On Monday morning, police used clubs and pepper spray on demonstrators near an official ceremony marking the 22nd anniversary of the Hong Kong handover.

Public broadcaster RTHK reported that officers attempted to clear barriers set up by protesters on a street near the Hong Kong Convention and Exhibition Centre, where Lam, two former chief executives and other top officials gathered for a reception marking the handover.

"Objects appeared to be thrown toward them as demonstrators with umbrellas tried to stop the police," RTHK reported. "Officers used batons and pepper spray to push the protesters back."

The police department said that some protesters threw objects containing an "unknown liquid" at officers, with some experiencing difficulty in breathing and had swollen and itchy skin. "Thirteen officers were sent to hospital for treatment," a statement said.

Lam suspended legislative debate on the controversial bill on June 15 and has suggested that the proposed law could eventually die when the Legislative Council's current term ends in July 2020. But protesters say they distrust her and are demanding the complete withdrawal of the bill.

Inside the convention center on Monday, Lam said that she needed to "grasp public sentiments accurately" following the weeks of protests and rallies, which has raised concerns among business executives and foreign companies that extol Hong Kong's reputation as a stable global financial hub.

"I will make more time for meeting with individuals from different political parties, walks of life and backgrounds," Lam said in her speech. "This will enable me to maintain my political awareness and gauge the pulse of the community."

Lam also said that she would "actively reach out to young people" and "enhance the government's overall work in communicating with different people and carrying out more comprehensive, accurate and timely analysis on the community's views on various government policies or issues of public concern in order to better gauge the public sentiments." Protesters break into Hong Kong's Legislative Council building during the anniversary of the city's handover to China on Monday. (Photo by Rie Ishii)

Hong Kong has been gripped by massive demonstrations and rallies for nearly a month. The protesters have lashed out against the now-suspended extradition bill that would allow criminal suspects to be transferred to mainland China, which lacks an independent judicial system.

Opponents of the legislation say that the proposed law could be used by mainland authorities to extradite anyone in Hong Kong -- or someone passing through the city -- to China, including Beijing's political adversaries.

A demonstration at the government's headquarters on June 12 devolved into violent clashes, with police using rubber bullets and tear gas to disperse the crowds. About 80 people were injured and more than 30 people were arrested, although some of those held in police custody have since been released.

Many of the protesters are students, who believe that stopping the extradition bill is their final opportunity to prevent the Chinese government from encroaching on their freedoms as guaranteed by the "one country, two systems" legal framework agreed to by China and Britain.

Rebecca Lam, a social worker and participant at the march, told Nikkei that she was especially concerned over the "despair" felt by teenage protesters and university students, who have been at the forefront of the demonstrations.

"We are disappointed by the government, and I can see that disappointment in youth, particularly," she said, noting recent suicides by protesters to draw attention to the extradition bill, including a 21-year-old student who left a message saying she wanted to "exchange my life to fulfill the wishes of 2 million," according to local news reports.

"I understand where their emotions are from," Lam said. "It looks like a violent protest or violent action, but deep down they are just so angry and so desperate, and there's nothing else they could do as peaceful protesters."