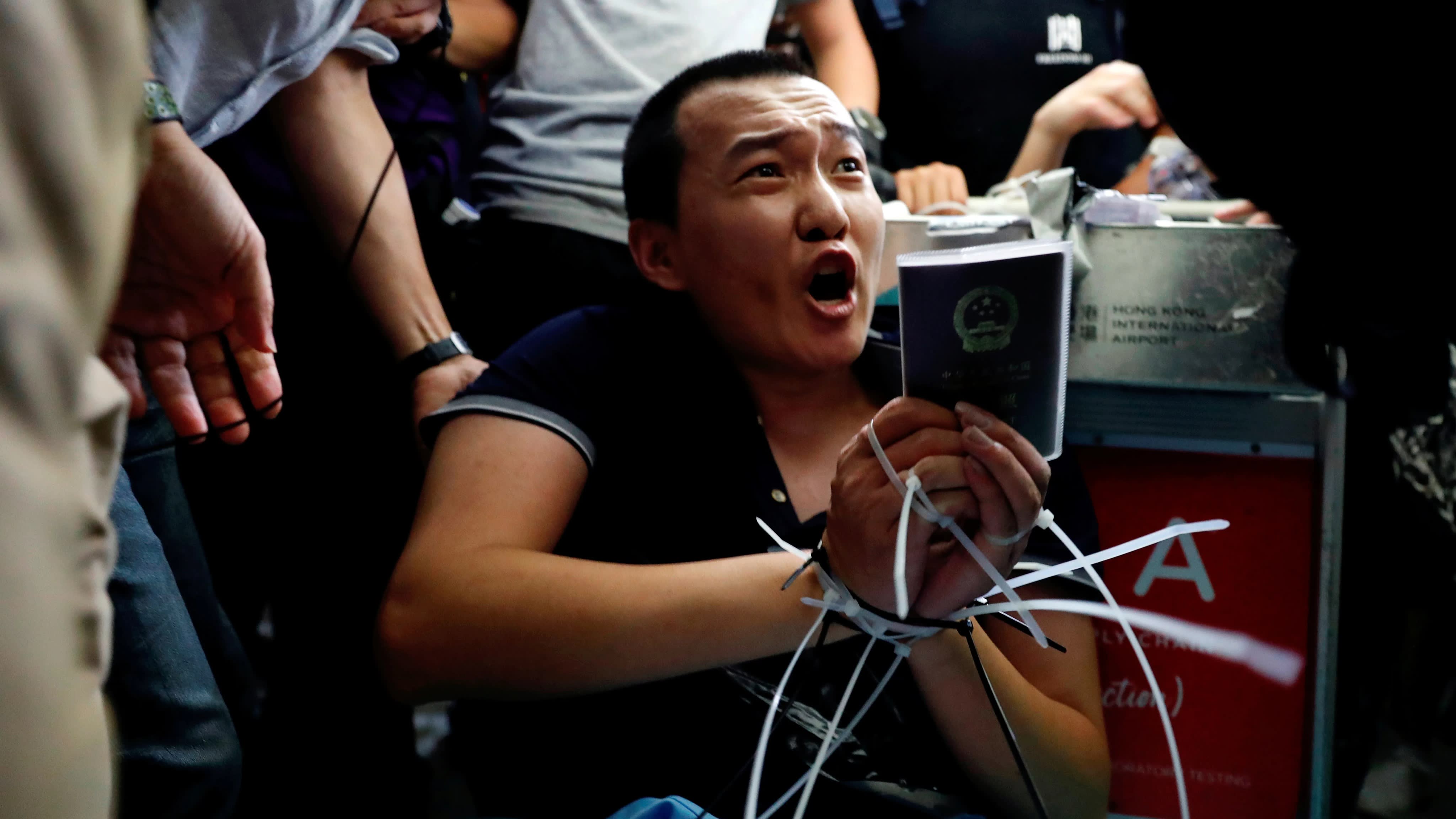 Fu Guohao, a reporter for China's Global Times, is held by protesters at Hong Kong International Airport on Aug. 13.   © Reuters

HONG KONG/BEIJING -- Turmoil in Hong Kong has grown following clashes at the city's airport, as social media pushes the protesters to more radical courses of action.

Tensions have escalated in the absence of a clear leader among the protesters. Live videos of police beating up young protesters spread through social media have inflamed the movement, and protesters have become more violent, throwing rocks at officers and setting fire to police stations.

The 10-week-old demonstrations were originally led by pro-democracy groups over a bill that would allow Hong Kong residents to be extradited to the mainland for trial. The protest movement had the backing of the city's business sector, but is now propelled largely by social media platforms, including anonymous chat app Telegram and the LIHKG forum.

A group attacked a journalist from the Chinese Communist Party-linked Global Times on Tuesday after mistaking him for undercover police. The reporter had been recording the protesters at Hong Kong International Airport, which had been shutdown by protesters for two days.

"We condemn in the strongest terms this almost terrorist act," a spokesperson for the mainland's Hong Kong and Macao Affairs Office said Wednesday. "Recent days have seen that the violent radicals in Hong Kong completely crossed the bottom line of law, morality and humanity, and flagrantly committed severe violent crimes."

Adding that the incident has greatly hurt Hong Kong's international image, "we firmly support the Hong Kong police force and judicial organs in enforcing the law resolutely, administering justice strictly and bringing criminals to justice as soon as possible," the spokesperson added.

Chinese authorities had initially placed heavy restrictions on foreign news organizations like CNN from broadcasting the protests on the mainland. But following the attack on the Global Times reporter, state media has repeatedly aired footage of the incident and of the airport in general, likely believing that foreign media is also starting to turn on the protesters given the violence in recent days.

Protesters were apologetic Wednesday, possibly aware that they had begun to lose the hearts and minds of not only the international community but the people of Hong Kong as well. At the airport, a few dozen demonstrators in the arrivals hall held a banner saying, "We're deeply sorry about what happened yesterday. We were desperate and we made imperfect decisions. Please accept our apologies."

The apologies continued on social media. "We promise to reflect and to improve," protesters said on Telegram. "Sorry we were too reckless... we are only afraid of losing your support to the whole movement due to our mistake, and that you give up on fighting."

Numerous flights were canceled at the Hong Kong airport Wednesday, following days of cancellations and a temporary shutdown of one of the world's busiest airports.

There have also been reports that mainland police forces are gathering near the border, a situation that could increase tensions even higher.

On Wednesday, the U.S. State Department warned travelers to the city to exercise increased caution, noting that "several large scale and smaller political demonstrations have taken place in various areas of Hong Kong, including at Hong Kong International Airport."

"Most have been peaceful, but some have turned confrontational or resulted in violent clashes. Police have used a variety of crowd control measures, including the deployment of tear gas," it said.