BEIJING -- When Chinese leader Deng Xiaoping set forth a "one country, two systems" principle to govern Hong Kong starting with its July 1997 handover from the U.K., guaranteeing a high level of autonomy and freedom of expression for 50 years, people worried what would happen in 2047.

Instead, they now face that reality nearly 30 years ahead of schedule under a Chinese leader who seems to put more weight on "one country" than "two systems."

Among the signs hoisted during Sunday's mass protests in Hong Kong opposing the extradition bill were ones that said "Hong Kong is not China," and "We are not Chinese."

They represented a clear "no" from the people of Hong Kong to the seeming "Chinafication" of the territory that the regime of President Xi Jinping has pursued.

Deng Xiaoping saw the city as a steppingstone to opening up the mainland economy. But Xi, who became leader of the Communist Party in 2012, has a different approach.

Xi refused to compromise during the Umbrella Movement of 2014, when students and other protesters demanded fully democratic elections for the city's chief executive. Several pro-democracy legislators elected to the Legislative Council in 2016 were also disqualified from serving. The message was clear: Beijing would brook no dissent from Hong Kong.

Freedom of expression appears under threat as well. In 2015, several Hong Kong residents were abducted and detained by Chinese authorities for selling books critical of the Communist Party. What many had feared about Chinese control is already coming true just two decades after the handover. 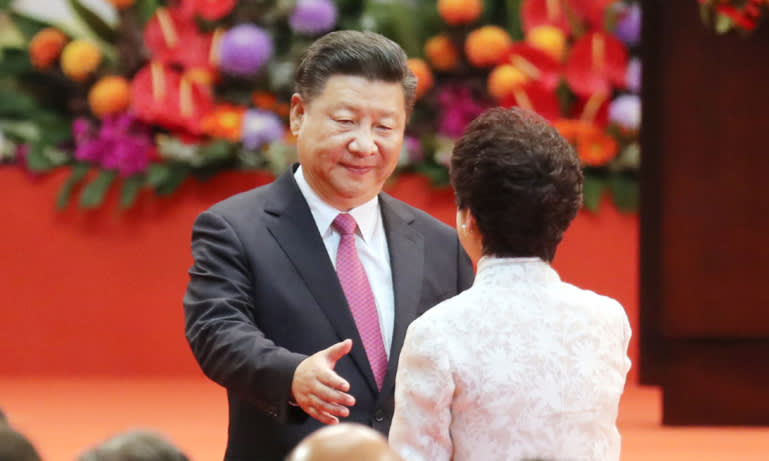 "Any attempt to endanger China's sovereignty and security, challenge the power of the central government and the authority of the Basic Law" -- Hong Kong's equivalent of a constitution -- "or use Hong Kong to carry out infiltration and sabotage activities against the mainland is an act that crosses the red line, and is absolutely impermissible," Xi said in July 2017 at a ceremony commemorating the 20th anniversary of the handover.

He called for stepping up "patriotic education" of young people, making clear an intention to integrate Hong Kong into the mainland.

Xi appeared confident that the mainland had solidified its grip on the city. Recent economic statistics would give him reason to think so.

Shanghai and Shenzhen have overtaken Hong Kong in gross domestic product since the handover. Hong Kong is now less than 3% of China's GDP, down from 18% back then. Xi also knew he could not give the city special treatment forever amid tightening controls on the mainland.

But he seems to have underestimated locals' distrust in the mainland's one-party rule.

Beijing backed Hong Kong Chief Executive Carrie Lam when she announced Saturday that the extradition bill would be delayed indefinitely. For Xi, this marked an unprecedented compromise in the city, and he likely hoped that it would calm things down.

Yet a quarter of the city's residents again turned out Sunday to demand that the bill be scrapped altogether. Even those who had distanced themselves from politics after the Umbrella Movement failed joined in this time, worried that they would face the repercussions as well.

The political turmoil shows no signs of letting up. Years of discontent over Beijing's hard-line tactics in the city are reaching a boiling point.

The roots of the city's frustrations go much further than the controversial extradition bill, as Beijing has gradually chipped away at the autonomy promised to residents.

Now U.S. President Donald Trump looks ready to discuss the latest protests at the Group of 20 summit at the end of June in Osaka. This would be unacceptable to Xi, who considers the goings-on in the city a domestic Chinese issue. Hong Kong represents one of Beijing's "core" national interests. Mishandling it could undermine the foundation of the Xi administration.

Hong Kongers have already won the international community over. And independence-minded Taiwanese President Tsai Ing-wen is gaining momentum in her reelection campaign ahead of the January vote.

They are all troubles of Beijing's own making.