US ups pressure on China as protests influence Taiwan election HONG KONG -- The people of Hong Kong marched in record numbers on Sunday with a host of grievances, and one overriding goal -- to force the territory's top official, Chief Executive Carrie Lam, to resign.

Organizers of Sunday's march claimed a turnout of 2 million people in this city of more than 7 million. Lam, who was elected two years ago by an elite 1,200-member election committee, has thus far refused calls to resign.

But she will have little choice if Chinese President Xi Jinping decides it is time for her to go. Such a scenario is looking increasingly likely, as the turmoil over the extradition law has now become a growing diplomatic headache -- involving the U.S. and Taiwan -- for Xi.

During the past week of protests, front pages of newspapers around the world were dominated by dramatic photos and stories from Hong Kong of massive civil disobedience and violent policing, including the use of rubber bullets, tear gas and even a pepper spray cannon on Wednesday.

This comes at a time when Xi is dealing with a painful trade and tech war with the U.S., a slowing economy, and rising consumer prices -- partially driven by outbreaks of African swine flu nationwide. U.S. Secretary of State Mike Pompeo told reporters on Sunday that it was likely President Donald Trump would raise the issue of Hong Kong with Xi Jinping if they meet at the G-20 summit in Osaka at the end of this month.

"We see what's happening, what's unfolding in Hong Kong," Pompeo said. "We are watching the people of Hong Kong speak about the things they value."

Under the "one country, two systems" framework, Hong Kong was promised a high degree of autonomy to run its own affairs after transitioning from a British colony to a special administrative region of China in 1997.

"Since the handover we have gradually lost our autonomy," said Denise Ho, a popular local musician and social activist. "We cannot accept Hong Kong becoming just another Chinese city."

Ho said the extradition bill was the last straw for Hong Kong. Many fear that its passing would raise the specter of politically or economically motivated disappearances of any activists, journalists or businesspeople that Beijing wished to target -- residents or visitors.

Sunday's huge turnout came one day after Lam made an unprecedented climbdown, announcing the temporary suspension of the bill. While it is not the permanent withdrawal that Hong Kongers are demanding, it was rare to be even acknowledging the unpopularity of the bill. 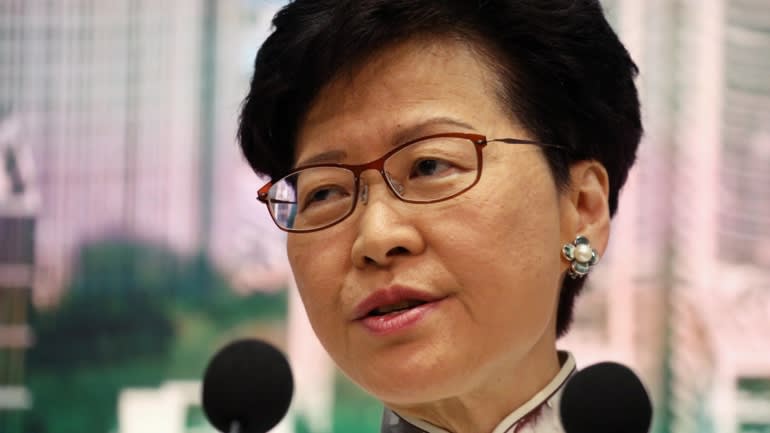 Hong Kong Chief Executive Carrie Lam sidestepped questions regarding apologizing to the people at Saturday's news conference, but issued a statement and apologized on Sunday.   © Reuters

If Lam thought suspending the bill on Saturday would diminish participation in Sunday's protest, she appears to have miscalculated.

"We know this government well," said Ken Tsang, an activist who became well-known in the Occupy-style Umbrella Movement of 2014 that sought universal suffrage for Hong Kongers. Citizens can only vote for one half of the legislature and cannot nominate or vote for the chief executive.

"It is just a lie. They're not really going to stop the bill," Tsang said of Lam's pause. "Maybe they'll wait until September for the new legislative session to start, and then bring it out again."

In another rare move on late Sunday night, the Hong Kong government released a statement containing an apology from Lam, suggesting the usually obstinate chief executive was beginning to feel political pressure.

"The Chief Executive admitted that the deficiencies in the Government's work had led to substantial controversies and disputes in society," the statement read.

"The Chief Executive apologized to the people of Hong Kong for this and pledged to adopt a most sincere and humble attitude to accept criticisms and make improvements in serving the public." Police officers fire a tear gas during a demonstration against a proposed extradition bill in Hong Kong on June 12.   © Reuters

Lam's handling of the extradition bill has also damaged Xi's approach to democratic Taiwan, which the Chinese Communist Party claims as its territory. In a January speech, Xi said that Taiwan must and will be unified with China, under an arrangement similar to what Beijing has with Hong Kong.

Taiwan will hold its next presidential election in January. Just a week ago, President Tsai Ing-wen was wrestling with a primary challenger within her Democratic Progressive Party, as well as the prospect of having to face a strong candidate from the resurgent opposition party Kuomintang, which favors closer ties to China.

The news of the past week appears to have helped Tsai win her primary, and has refocused the election on Taiwan's sovereignty rather than its economy. For the moment, her strong stand against Chinese political and military intimidation is an asset, while top Kuomintang candidates have scrambled to denounce "one country, two systems."

"What's happening now in Hong Kong proves 'one country, two systems' is a failure," Taiwan government spokeswoman Kolas Yotaka told the Nikkei Asian Review. "The people of Hong Kong have the right to strive for the high degree of autonomy the Chinese government promised them."

Aside from boosting Tsai's reelection chances, what is likely to make Xi even more displeased with Lam is the growing camaraderie and sense of shared struggle between Taiwan and Hong Kong that appears to be intensifying by the day.

On Sunday, thousands of Taiwanese protested in solidarity with Hong Kong in the Taipei. Such a large demonstration in support of the territory would have been highly unlikely just weeks ago.

"I think Taiwan can draw a lot of lessons from Hong Kong. One day we may face the same situation and problems," said Chao Man-chun, a Taipei resident who attended Sunday's rally. "What's happening there has provided a good opportunity for reflection for those people who haven't determined how they feel about Taiwan's relationship with China."

But Xi would face a problem if he were to dismiss Lam, as people would think that he caved to outside pressure.

Beijing has continued to support the Hong Kong government and Lam. The Communist Party mouthpiece People's Daily's overseas edition carried a story on Monday morning reiterating that "the central government firmly backs the chief executive and the [Hong Kong government] to govern in accordance to the law."

The article expressed opposition to any "external forces interfering in Hong Kong affairs and China's domestic politics," which the Chinese government usually does when similar incidents take place. On the other hand, the article stated its wish for the resumption of "tranquility" and people to "concentrate on development of [the] economy and livelihood matters." Some observers see this as a sign of Beijing supporting Lam for now while keeping its options open.

Should Lam survive the fallout from the past week, Ho says she will still have to deal with prolonged pressure from protesters who are wiser and more sophisticated than Hong Kong's Umbrella Movement protesters, who became worn down from the task of holding the territory they had occupied.

"We have learned from the mistakes we made in 2014," Ho said, referring to the movement. "We have become very flexible and creative. We have learned how to make this fight a sustainable one."