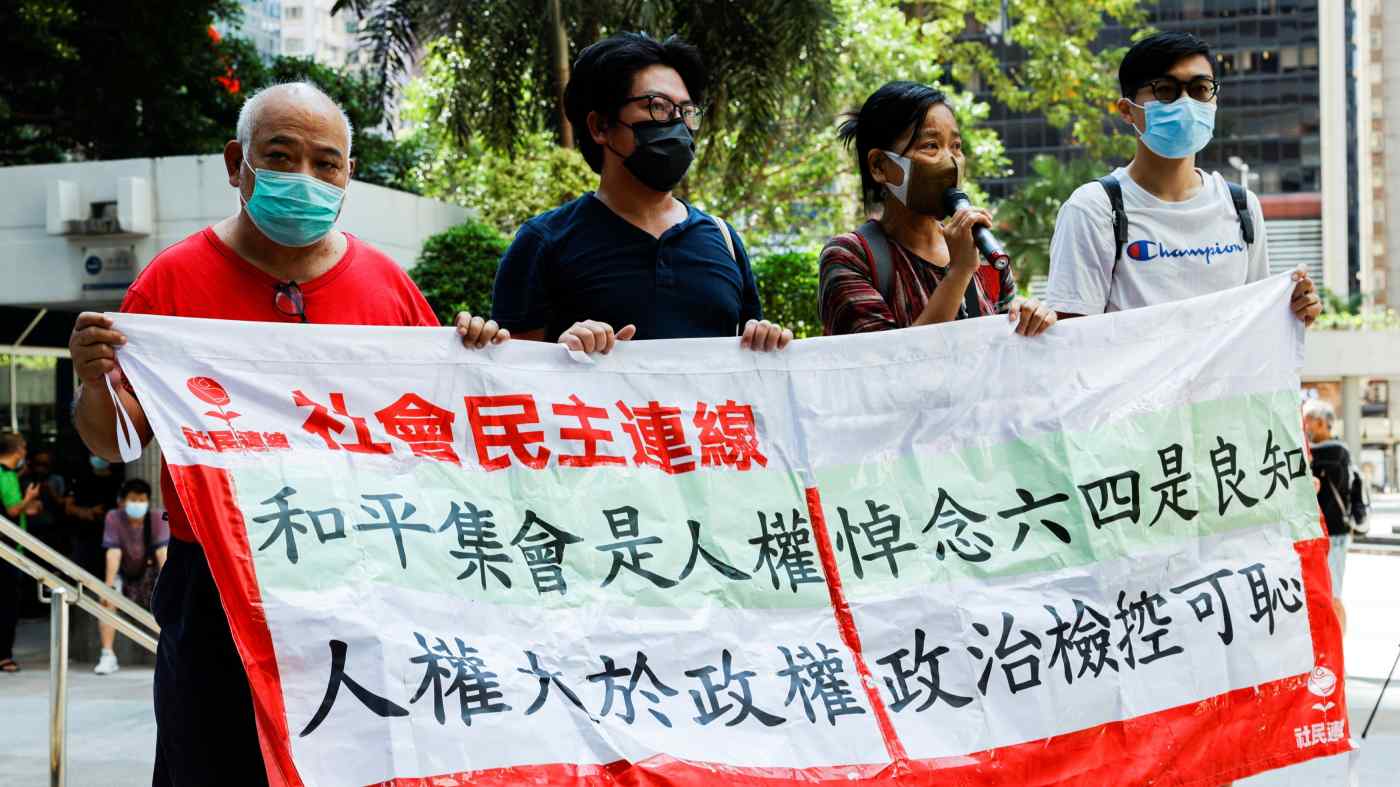 HONG KONG -- Twelve Hong Kong pro-democracy activists received prison sentences of up to 10 months on Wednesday over their participation in a 2020 commemoration of the June 4 Tiananmen Square crackdown.

Thousands had gathered each year since 1990 for a candlelight vigil in the city's Victoria Park to remember the crackdown's victims until last year when police barred the gathering, citing pandemic controls on social gatherings.

Hundreds defied the ban, and on Wednesday, District Court Judge Amanda Woodcock handed down sentences of four to 10 months to 12 activists who had pled guilty to participating in an unauthorized assembly or inciting others to do so.

Freedom of assembly, procession and demonstration are guaranteed under the Basic Law, the city's constitution, the judge said, but "these rights are not absolute and are subject to restrictions ruled constitutional."

Given public health restrictions at the time of the 2020 vigil and the need to protect others' rights, Judge Woodcock said, "To defy and incite others to defy those restrictions under such circumstances is serious."

Only four of the 12 defendants will serve time specifically over the incident as Woodcock suspended the sentences of three activists and ruled that five others can serve their terms concurrently with sentences received in other cases.

Ho, a former lawmaker already imprisoned for other cases, announced Monday that he was resigning from the Alliance as well as the New School for Democracy and the China Human Rights Lawyers Concern Group. Albert Ho, center wearing a black mask, with Lee Cheuk-yan and Chow Hang-tung at the 2020 vigil (Photo by Kenji Kawase)

Steven Kwok, head of the Labor Party, and Chiu Yan-loy, a former district councilor, will each head to prison on fresh eight-month terms. Chu and Wan are in pretrial detention.

Ex-lawmaker Cheung Man-kwong and former board member of the Alliance Mak Hoi-wah were each sentenced to eight months but granted 18-month suspensions while former district councilor Leung Kwok-wah got a four-month term, suspended for a year. Judge Woodcock cited each of the defendants' personal background, age, lack of past criminal record, health condition and history of public service in releasing them.

Of 26 activists originally charged in the case, two --- Nathan Law and Sunny Chueng --- had fled to the U.K. Joshua Wong, Tiffany Yuen and two others earlier received sentences of four to 10 months after pleading guilty.

The remaining eight defendants have pled not guilty, with trial set to begin in November. Most of the group is already in custody for other cases, including Apple Daily founder Jimmy Lai, former Democratic Party Chairman Wu Chi-wai, and Lee Cheuk-yan and Chow Hang-tung, the chairman and vice chairwoman, respectively, of the Hong Kong Alliance.

In a separate development, the government announced that loyalty oaths taken last Friday by seven of 24 members of the city's district councils had been judged invalid. Secretary for Home Affairs Casper Tsui judged that the pledges by the pro-democratic councilors elected in 2019 to uphold the Basic Law and bear allegiance to the government were insincere.

With the CHRF already gone and the Hong Kong Alliance set to vote on dissolution later this month, Secretary of Security Chris Tang this week has turned his attention to the Hong Kong Journalists Association.

On Wednesday, he urged the group to reveal information about its funding and membership, demands previously made formally to the Alliance and CHRF.

"I think I'm not making any allegations," he said, "just tell[ing] the public about my observations. I think it's also from a large number in the community that they have the same doubts about the (Journalists) Association."

His comments followed a front-page interview on Tuesday with Ta Kung Pao, a Communist Party-controlled newspaper, in which he questioned the journalist group's acceptance of student members and alleged it had "infiltrated" school campuses.

The association rejected Tang's comments, expressing regret that a senior official would "ignore the truth and make ranting comments" while highlighting that freedom of the press is also enshrined in the Basic Law.

Wall-fare, a nonprofit organization supporting prisoners' rights, said on Tuesday that it would disband after Tang last week claimed that the flow of controlled supplies to activists in custody was contributing to a national security threat.

The Hong Kong Professional Teachers' Union, the city's largest professional union, voted to disband last Saturday, after coming under pressure in a campaign kicked off by the People's Daily, the Chinese Communist Party's official mouthpiece.

"I think I am not asking them to dissolve," Tang said Wednesday when asked about the groups' disbanding. "It's their own decision to whether to dissolve."