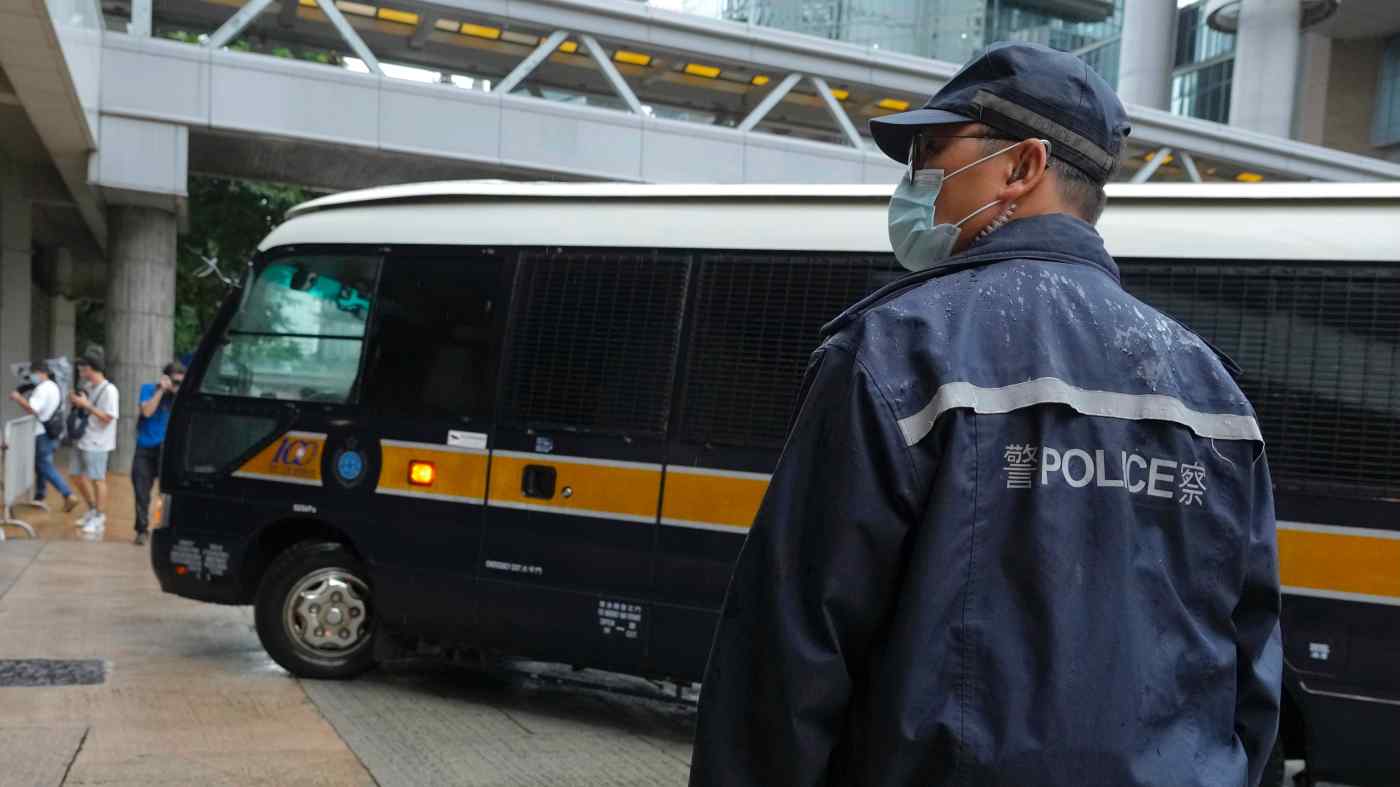 HONG KONG -- The first person convicted under the national security law Beijing imposed on Hong Kong was sentenced to nine years in prison on Friday.

Tong Ying-kit, a 24-year-old former restaurant worker, was found guilty of secession and terrorism on Tuesday, a year after he drove his motorcycle into a line of police with a flag reading, "Liberate Hong Kong, Revolution of Our Times." Three officers were injured.

The verdict is expected to have vast implications over other cases in which defendants allegedly used the same slogan or others considered provocative by the authorities. The first trial on sedition charges since Hong Kong's return to Chinese rule in 1997 began on Thursday.

It is unclear whether chanting or displaying the "Liberate" slogan in the future will constitute a crime. Tong Ying-kit arrives at court in a Hong Kong police van shortly after his arrest in July 2020.   © AP

Tong's encounter with police occurred on July 1, 2020, hours after the security law came into effect.

He was sentenced to six and a half years for secession and eight years for terrorism, resulting in a partially concurrent sentence of nine years. The judges noted that although the two offenses arose from the same event, they are "separate and distinct offenses with completely different elements."

They said they believe the punishment will "achieve the deterrent effect required."

In mitigation, defense lawyers said Tong, having taken first-aid courses, initially participated in the protests two years ago to offer medical care with no intention of harming others. He was also previously of good character and has expressed remorse. His grandmother, who is battling cancer, wrote to the court to ask for "one more hug" from her grandson before she died.

However, judges Esther Toh, Anthea Pang and Wilson Chan concluded that the defendant should have thought about his family's circumstances before embarking on his criminal acts. They added that since Tong pleaded not guilty, expressing remorse could not be a mitigating factor.

His conviction followed a 15-day trial, marked by heated debate over whether the "Liberate" slogan, coined by now-jailed democracy activist Edward Leung during a legislative campaign rally in 2016, should be considered as incitement to advance Hong Kong independence.

In a rare move under Hong Kong's common law system inherited from the U.K., Tong's case was heard by the panel of three judges from a pool hand-picked by the government. An appeal for a jury trial was denied.

Despite official reassurance that the law would only affect a small number of people, a total of 138 have so far been arrested under the legislation. Of those, 76 have been charged, including the majority of the city's opposition politicians, as well as pro-democracy activists and protesters.

The political pressure has been felt on other fronts as well. Earlier on Friday, a separate court in the city decided to keep Chow Hang-tung, an organizer of annual 1989 Tiananmen crackdown commemorations, in custody until next Tuesday.

She is charged with "inciting others to knowingly join an unauthorized assembly" related to the June 4 vigil this year, which was banned by the government due to the pandemic. She has been behind bars since June 30.

On Friday, Chow pleaded innocent, as mourning the Tiananmen crackdown "is not a crime." The case was adjourned until early October.

The alliance itself has been shoved to the corner, with top executives jailed, organizations withdrawing and all staff to be laid off by Saturday. Its standing committee will be trimmed to seven from the original 20.

Asked about the future, Leung, one of the few remaining standing committee members not in jail, admitted that "we are now in the process of making the adjustments."