Officials demand data on ties to US groups, funding and membership 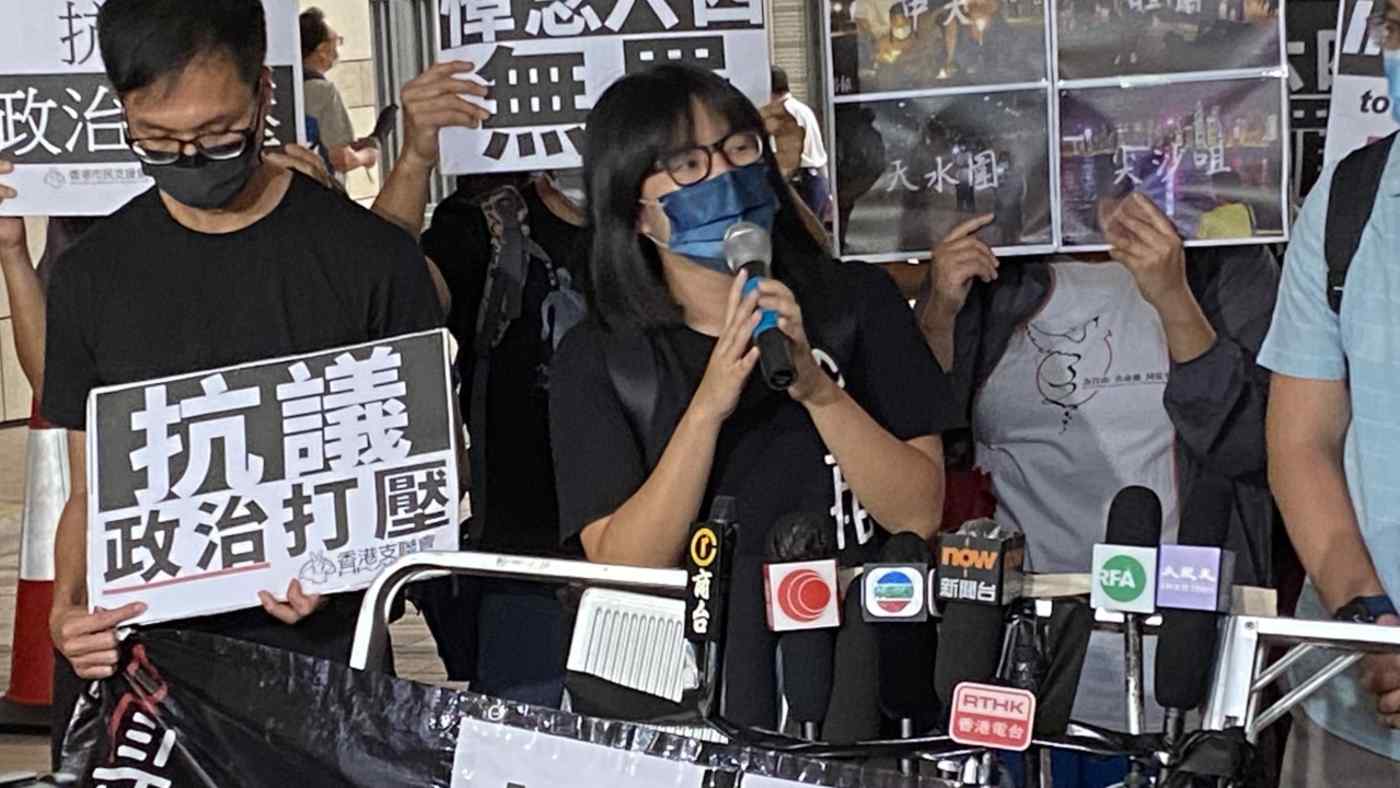 Under the national security law imposed on the city by Beijing in June 2020, such collusion is a crime punishable by up to life imprisonment.

The police sent three-page notices on Wednesday to the seven standing committee members of the Hong Kong Alliance in Support of Patriotic Democratic Movements of China, demanding that they hand over information within two weeks on their links with specific overseas individuals and organizations, such as the Washington-based National Democratic Institute.

They were also told to provide personal data on all alliance members, minutes of board meetings, financial records and information on sources of funding, according to a copy of the letter seen by Nikkei Asia.

In an statement emailed to Nikkei Asia, the police acknowledged sending the letter on Wednesday to unspecified individuals to demand information "related to the execution of maintaining national security," but said "we cannot provide further details."

Chow Hang-tung, vice chairperson of the alliance, told Nikkei Asia on Wednesday that the allegations of collusion were "absurd."

"We solemnly repudiate this accusation of us being a foreign agent," she told local reporters earlier.

She stressed that the organization, since its formation in May 1989, has worked to support China's pro-democracy movement.

"No foreign government or political organization has directly or indirectly incited us, and we also have not acted for the benefit of any foreigners," she said. "We are an organization established only for the purpose of bringing democratic ideas to Hong Kong and China."

The group is best known for holding an annual candlelight vigil in Hong Kong's Victoria Park to commemorate those who died in the June 4, 1989 crackdown in Beijing's Tiananmen Square. This year, for the second time in a row, the police refused to authorize the event, citing pandemic social controls.

Chow, a lawyer, said the group will consider how to respond to the police demands.

Alliance Chairman Lee Cheuk-yan and Vice Chairman Albert Ho, both former legislators, are serving 20 month and 18 month prison sentences, respectively, for their participation in an unauthorized assembly on Oct. 1, 2019, when the Chinese Communist Party celebrated 70 years in power.

The alliance has been under pressure amid a crackdown on dissenting voices in the city.

Luo Huining, Beijing's top representative here, said at an event in June celebrating the centennial of the Communist Party that the territory's "genuine archenemy" was one advocating "the end of one-party dictatorship," an implicit reference to the alliance's key slogan.

Chow was detained for over a month, charged with "inciting others to knowingly join an unauthorized assembly," in relation to this year's banned vigil. She was released on bail on Aug. 5 and is scheduled to be sentenced in relation to two other cases over the coming three months.

The alliance's June 4th Museum was forced to close on June 2, just four days after it had reopened following a renovation and two days before the anniversary of the Tiananmen crackdown. Seven staff members were laid off last month.

Local newspaper Ming Pao reported on Wednesday that the standing committee had passed a resolution to proceed with dissolving the group, with the full alliance membership to make a final decision later. Chow declined to confirm this.

The new pressure on the Alliance comes as other prominent civic groups have already been forced to disband.

The Civil Human Rights Front, organizer of annual July 1 mass protest marches, announced its dissolution on Aug. 15. The Hong Kong Professional Teachers' Union, the city's largest professional union, said a few days before that it would dissolve as well.

The city's opposition parties are also under stress, weighing whether to participate in legislative elections scheduled for December even though a new candidate screening process is likely to disqualify many of their established activists and elected members will hold only a small fraction of seats in the body.

The Democratic Party, the oldest such group, has said it will decide by Sept. 26.

Establishment figures are urging them on, to give the polls more credibility. Lu Wenduan, vice chairman of All-China Federation of Returned Overseas Chinese, wrote in Ming Pao this week that sitting out the election would be "a straight road to death" for the Democrats.

Chief Executive Carrie Lam on Tuesday questioned the raison d'etre of a party that abstains from elections. "This is a bit strange," she said at her weekly news conference.

The Law Society of Hong Kong, the city's largest association of lawyers, elected new board members late on Tuesday after coming under pressure itself from establishment voices, including the People's Daily, the official Communist Party newspaper. Lam herself warned last week that the government "will consider severing our relationship" with the organization if it is "overridden by politics."

Incumbent Law Society board member Jonathan Ross, deemed an opposition sympathizer on the group's board, announced his withdrawal from the vote last Saturday, citing fears over "my safety, and the safety of my family" without elaborating.