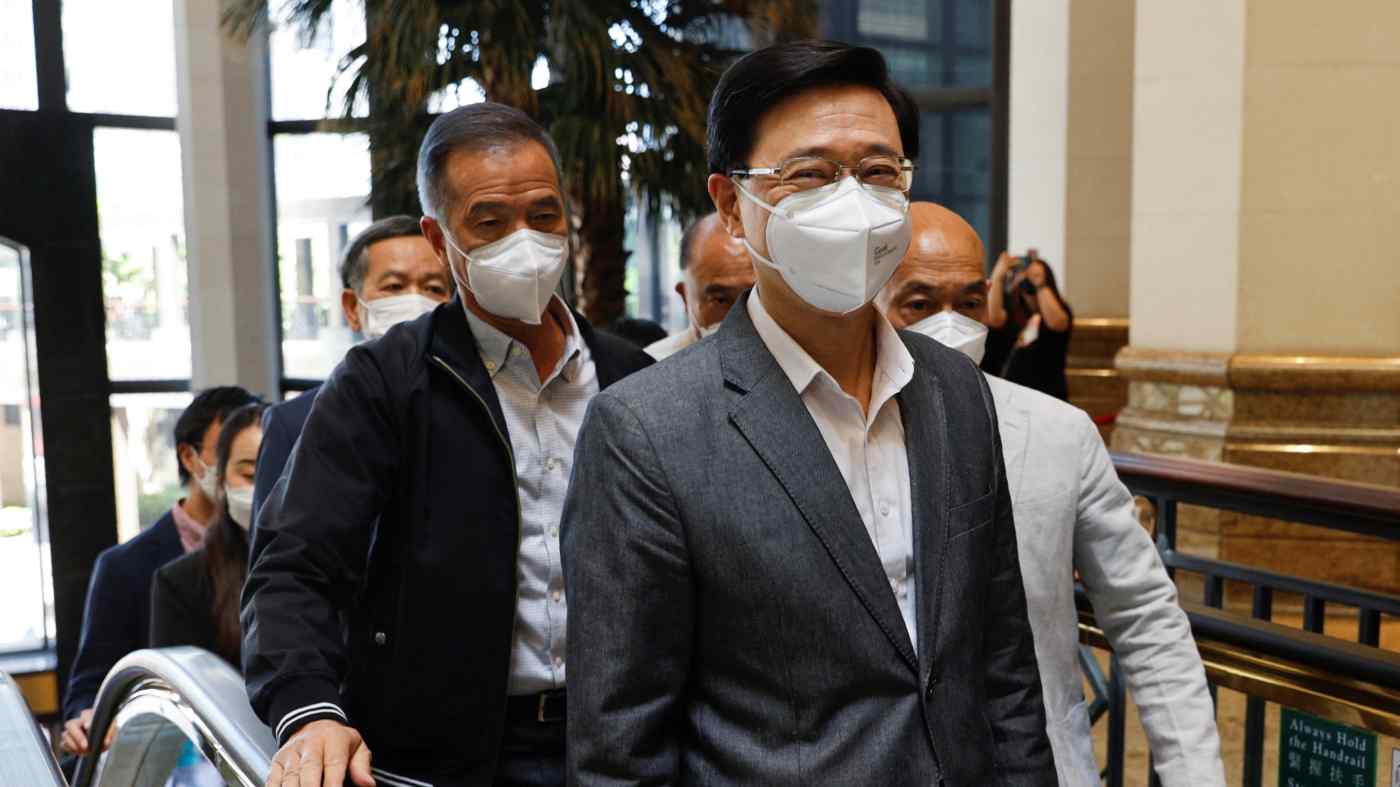 HONG KONG (Reuters) -- Hong Kong's former No. 2 official John Lee, who will run in a leadership election in May, said on Saturday he plans a new chapter for the global financial hub that has been wracked by unprecedented upheaval with pro-democracy protests and COVID-19.

Lee, 64, resigned on Wednesday to run to replace Chief Executive Carrie Lam, whose five-year term ends on June 30. Lam oversaw one of the most tumultuous periods in Hong Kong history with pro-democracy demonstrations and coronavirus.

"This will be a new symphony and I am the conductor," Lee, who was the city's security chief during anti-government protests in 2019, told a press conference.

"Together, we will play a more splendid new piece for Hong Kong."

Fleshing out his policy platform, Lee said loyalty to the central government was a priority for any chief executive and part of his platform included accelerating plans to resolve the city's chronic housing shortage.

Hong Kong media reports said this week that Beijing officials want Lee to be the only candidate, and will not give the green light to others to stand against him.

Lee said he welcomed any other leadership contenders.

The show of support, from some of the city's most powerful property tycoons, came before Lee officially announced his bid to run for leader, signalling the move had already been approved and received tacit approval from some Hong Kong business people.

Lee is the first person to announce a bid for the global financial centre's top post since the nomination period opened on Sunday.

Other possible contenders mentioned in media include the city's financial secretary, Paul Chan, as well as former leader Leung Chun-ying. None has announced a bid.

Lee, a former career police officer, is widely expected to prioritise security issues if he gets the top job, having previously urged new legislation to fully implement a sweeping national security law Beijing imposed on the city in 2020.

He has also warned about lingering underground "terrorist" and independence movements.

The former deputy commissioner of police was sanctioned by the United States, along with other Hong Kong and Chinese officials, for what Washington described as their role in curbing Hong Kong's freedoms under the security law.

Hong Kong and Chinese authorities deny individual rights are being eroded and say the security legislation was needed to restore stability after prolonged unrest in 2019.

Last year, as Hong Kong's security chief, Lee sent letters to media tycoon Jimmy Lai and branches of HSBC and Citibank threatening up to seven years' jail for any dealings with the billionaire's accounts in the city, according to documents seen by Reuters.

Lam appointed Lee from heading security policy to Chief Secretary in June 2021, broadening his government experience and responsibilities. He continued to take a hawkish stance on security issues in his new role.

Under fresh demands by Beijing that only "patriots" be allowed to run Hong Kong, Lee led efforts to screen the candidates to legislature elections last December.

Writing on a blog ahead of the poll, Lee said that "destructive" foreign agents were deliberately trying to obstruct the poll.

"If anything was 'rigged', it was the deliberately distorted image of Hong Kong that has been manipulated from the dark side of one's personal internal bias," Lee wrote in a letter to the Economist dated Jan. 11 and posted on a city government website.