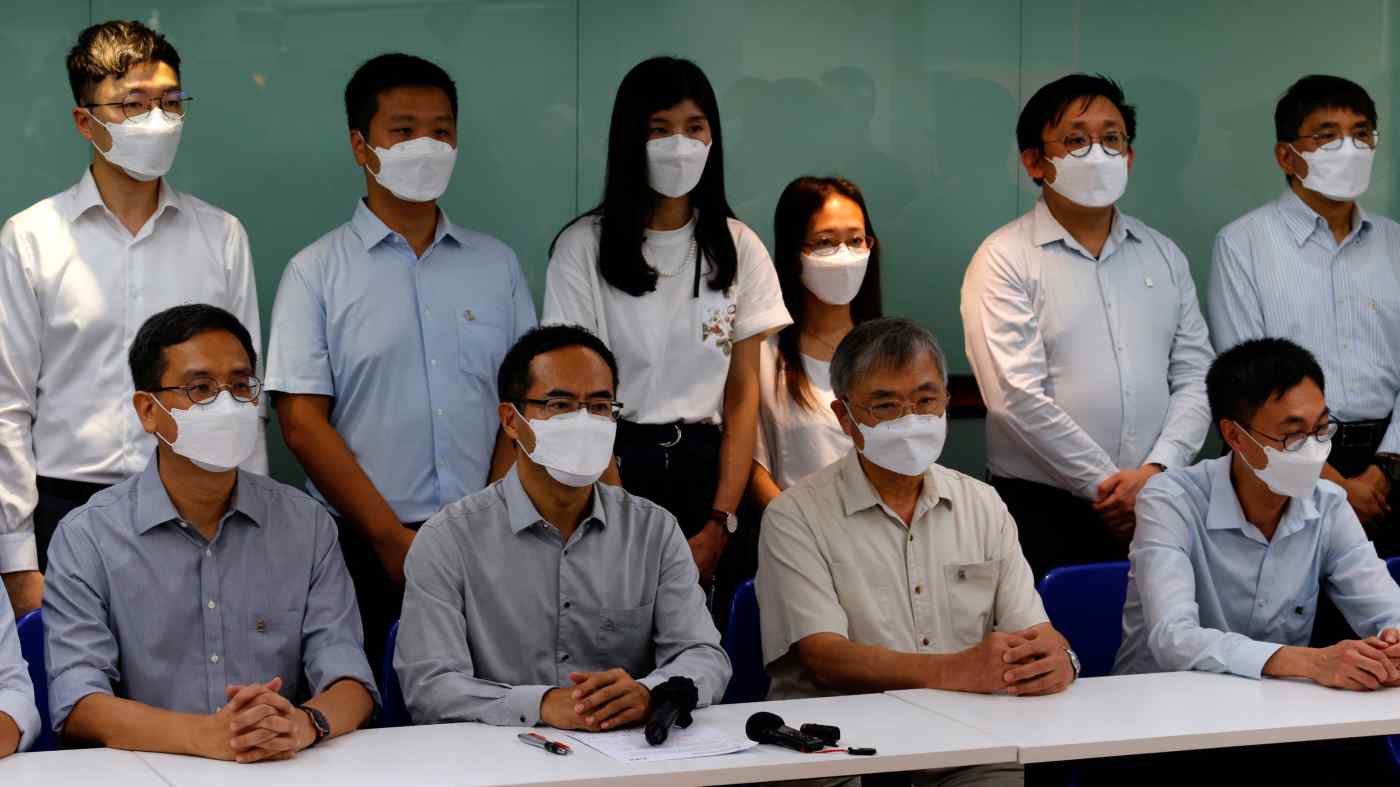 Fung Wai-wah, president of the Hong Kong Professional Teachers' Union, said on Tuesday evening the decision follows "the drastic changes in the social and political environment."

The PTU has been a driving force for the pro-democracy movement in the territory over decades.

In a letter addressed to members, Fung described the recent social and political changes in Hong Kong as "deplorable" and "radical."

Union leaders "have been attempting by all means to explore ways for the continuation of our services and operation," to no avail, he said.

The executive committee unanimously decided on Monday night to dissolve the organization, with the process to begin immediately, the letter said.

The PTU has faced heavy attacks by authorities, with the most recent bombshell coming directly from Beijing. The People's Daily and Xinhua published articles condemning the union on July 30 and 31, respectively. The two major mouthpieces of the Communist Party and the state together labeled the union as a "malignant tumor" that needs to be "exterminated," using the same set of Chinese terminology.

Following the concerted voice from Beijing, the Hong Kong government cut ties with the PTU. In a statement July 31, the city's education bureau said it no longer regards the union as a professional education body and would terminate "any formal or informal meetings with PTU or its representatives, nor consult it on education-related issues."

The PTU is the biggest union of a single trade in Hong Kong, claiming 95,000 members. It currently has 200 full-time staff members.

The union was organized in 1973 by Szeto Wah to protect the rights of teachers and provide various services to them. Szeto was also an iconic figure in Hong Kong's pro-democracy movement along with Martin Lee, both being first elected to the local legislature during British colonial rule in 1985. Both men were appointed to the drafting committee for the Basic Law in the same year, to represent the democratic voices of society. Teachers protest against the extradition bill during a rally organized by the Hong Kong Professional Teachers' Union in Hong Kong on Aug. 17, 2019.   © Reuters

When the pro-democracy movement erupted in mainland China during spring 1989, Szeto established the Hong Kong Alliance in Support of Patriotic Democratic Movements of China. Following the bloody crackdown at Beijing's Tiananmen Square on June 4, 1989, the group became the organizer of the annual candlelight vigil at Hong Kong's Victoria Park to commemorate the victims. The event was terminated this year, ostensibly due to the pandemic. PTU was one of the founding members of the Hong Kong Alliance.

Toru Kurata, a professor at Rikkyo University in Tokyo, told Nikkei Asia on Tuesday that the dissolution of the PTU, given its background and history, "could have even more serious consequences than disbanding a political organization, as the vitality of Hong Kong society has been supported by private sector groups like them."

As political pressure mounted against the Hong Kong Alliance, the teachers union sought ways to assuage the situation. The PTU declared its withdrawal from the Alliance in June, on top of leaving other pro-democratic groups such as the Civil Human Rights Front -- the organizer of the annual July 1 mass demonstration -- and the Hong Kong Confederation of Trade Unions (HKCTU), the umbrella organization of the city's labor movement.

The Alliance has been a major target of the crackdown against dissenting voices in Hong Kong. Chairman Lee Cheuk-yan was sentenced to 20 months in prison and Vice Chairman Albert Ho Chun-yan received 18 months for their participation in an unauthorized assembly during October 2019, when the Chinese Communist Party celebrated 70 years in power. Lee is also a leading member of the HKCTU.

Luo Huining, Beijing's top representative in Hong Kong, said at an event in June celebrating the centennial of the Communist Party that the territory's "genuine archenemy" is the one advocating "the end of one-party dictatorship" -- an implicit reference to a key slogan of the Alliance.

Fung, the PTU president, said the momentum toward dissolving the group came in the past few days, as all efforts to ease political pressure failed and criticisms targeting the union were still "coming from everywhere."

Kurata views recent developments in Hong Kong as a "comprehensive repression against the pro-democracy camp by Beijing," and this action is moving at an "amazing speed." The veteran Hong Kong and China watcher sees an "overall revamping of social system in a very wide sense, including implicit social rules and norms, that Hong Kong relied upon until now."

"I am personally trembling with fear that I could no longer view Hong Kong as a free society," he said.