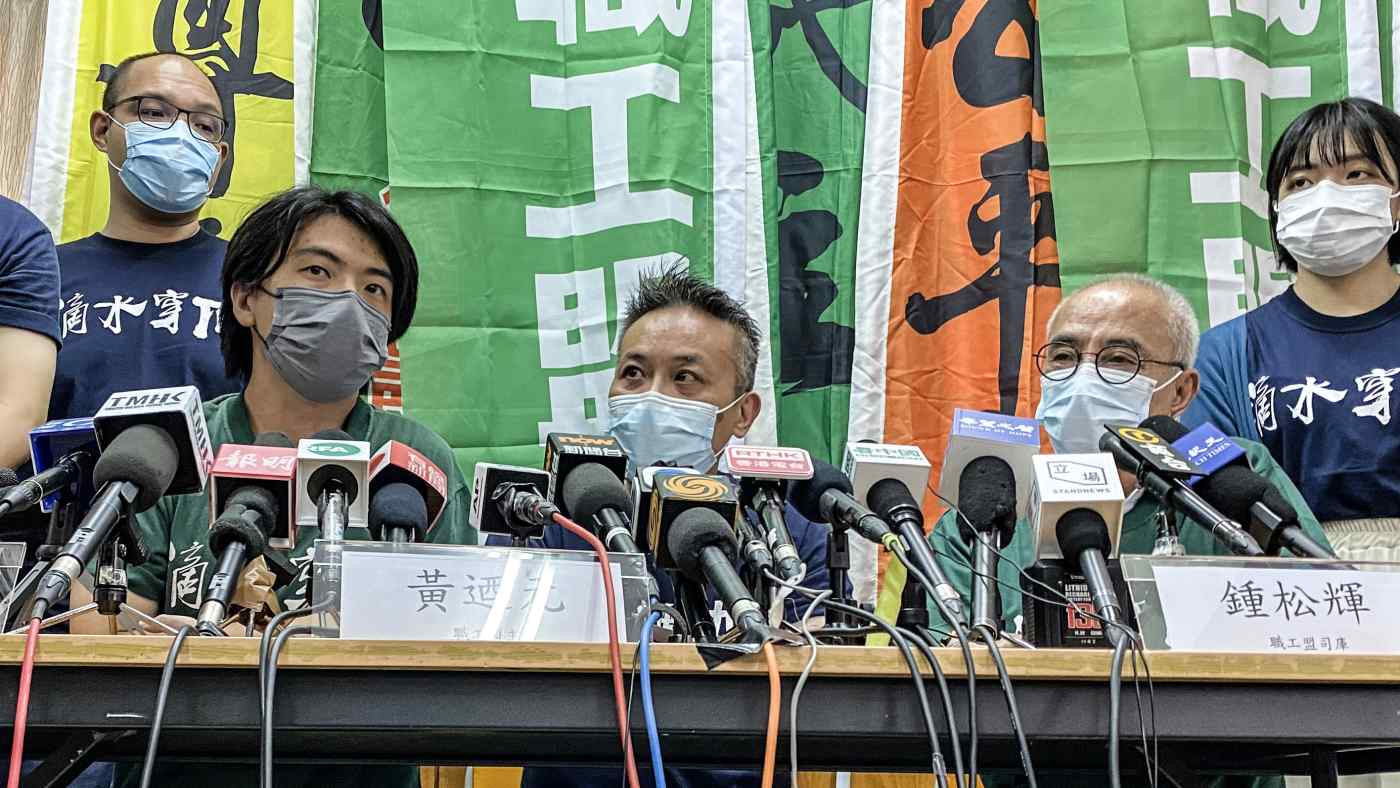 HONG KONG -- Hong Kong's largest pro-democracy labor group is set to join a growing list of civic groups succumbing to pressure from a crackdown on dissent under the national security law imposed on the city by Beijing last year.

"We tried our best, but we just can't see any more room for us to stand anymore," Joe Wong Nai-yuen, chairman of the Hong Kong Confederation of Trade Unions, told reporters on Sunday.

Wong said that the union and those involved with it had received threatening messages which made them feel their personal security was at risk, but he declined to give details.

Vice Chairman Leo Tang King-wah, though, rejected suggestions from pro-Beijing media that the group had acted as a "foreign agent" or "colluded with foreign forces," actions that could constitute crimes under the security law.

"Here, we would like to state clearly that our relationships with international unions are legal," he said.

The HKCTU's executive committee has called an extraordinary general meeting for Oct. 3, when a vote of at least 80% in favor will be required to officially dissolve the organization established in 1990.

The move comes after the jailing of key leaders of the group and intense pressure on a number of member unions. The HKCTU's move to disband comes after the jailing of key leaders and intense pressure on a number of member unions. (Photo by Kenji Kawase)

The Hong Kong Professional Teachers' Union, one of the HKCTU's largest member groups, voted to disband on Sept. 11, following denunciations by the People's Daily, the official newspaper of the Chinese Communist Party and criticism from city officials.

A number of newer member groups formed amid the 2019 anti-government protests have also come under fire. Five leaders of the General Union of Hong Kong Speech Therapists are also in detention of subversion charges in relation to a series of children's picture books they published about a community of sheep banding together and fighting off challenges from intruding wolves.

The Hospital Authority Employees Alliance meanwhile on Friday formally denied allegations that it had engaged in political activities breaching the city's labor union ordinance. The union has been under attack over its involvement in a 2019 strike and for questioning the effectiveness of a COVID vaccine made by China's Sinovac.

HKCTU General Secretary Lee Cheuk-yan, a co-founder, is serving 20 months in prison after conviction of involvement in a number of unauthorized assemblies in 2019. Carol Ng has largely been in custody since January when she, then HKCTU chairperson, was arrested with dozens of other pro-democracy activists on subversion charges in relation to an opposition primary election last year.

On Monday, the Hong Kong Alliance in Support of Patriotic Democratic Movements of China, said that Lee as its chairman had sent a signed letter endorsing the group's decision to call a vote on disbanding for Sept. 25.

"With regard to the current social environment, we recognize the best way for the Alliance to handle the situation is to proactively disband," Lee wrote. Albert Ho, who served as vice chairman until last week and is also imprisoned, sent an identical letter, the Alliance said.

The Civil Human Rights Front, the organizer of the largest protest events during the 2019 demonstrations as well annual July 1 marches, disbanded in mid-August after the arrest of a number of its top leaders.

"The entire civil society in Hong Kong is now becoming a target of attack from Beijing," said Toru Kurata, a professor at Rikkyo University in Tokyo. Speaking after the HKCTU's news conference, he said the leadership's hesitancy to elaborate on the reasons for disbanding the group is "quite serious" and might indicate a fear that comments "could be deemed illegal under the national security law."

The HKCTU consists of over 90 unions, which in turn represent some 145,000 workers, according to the group's website. Some of the unions have yet to be recognized by the government, which in its annual statistical report published last year listed HKCTU's membership at 78 unions with 135,954 members. This put the HKCTU behind only the pro-Beijing Hong Kong Federation of Trade Unions in size.

The Federation said Monday that it won 76 seats in voting the previous day for the Election Committee, which will select the city's next chief executive in March as well as fill 40 of 90 seats in the next legislature and vet all candidates for the lawmaking body before December elections under a political system overhaul imposed by Beijing.

The Federation won 46 of the 60 seats allotted to labor representatives, a race that drew 76 total candidates. Most committee seats, however, were filled without competitive selection. Members of the Hong Kong Alliance established the HKCTU, with Lau Chin-shek, an iconic figure in the city's early pro-democracy movement and a veteran labor activist, serving as its first chairman and Szeto Wah, founder of the Professional Teachers' Union, acting as general secretary.

In a place where labor rights have been subordinated to business interests, the group has played a significant role in standing up to protect workers' interests. It has also partnered with the government to run 15 skill training centers around the city, with over 1,000 students currently registered in around 50 courses.

"We have to dissolve together with [HKCTU]," said Marilyn Tang Yin-lee, head of the training center, on Sunday.

In 2013, HKCTU and an affiliate union led a 40-day strike, one of the longest industrial actions ever in the city, as dock workers sought better labor conditions from companies controlled by tycoon Li Ka-shing. The strikers agreed to go back to work after being offered a 9.8% pay raise.

The HKCTU was also active during 2019 protests, including in a general strike in which 350,000 people took part.

Tian Feilong, an associate professor at Beihang University Law School in Beijing and the director of the Chinese Association of Hong Kong and Macao Studies, had labeled the HKCTU as a target in comments quoted by Hong Kong media in mid-August.

"Prior to the national security law, what they did was considered to be in a legal gray zone," he said. "But after the law, their actions were obviously illegal."

Despite such claims, HKCTU Vice Chairman Tang said that it was normal for a labor group to make international connections, organize strikes on behalf of workers, seek legislative seats, and fight for democracy and rights.

"We just practiced normal labor movement," he said. "Even though we made the hard decision [to disband], we have to tell workers in Hong Kong and our members that we did nothing wrong."