HONG KONG -- An iconic statue commemorating the 1989 Tiananmen crackdown in Beijing was removed from the campus of the University of Hong Kong overnight after standing there for 24 years.

In the early hours of Thursday, a Nikkei Asia reporter heard cracking and cutting sounds from behind a large white curtain and yellow barricades that had abruptly been put up around the 8-meter-tall "Pillar of Shame."

At dawn, workers were seen carrying large wrapped objects, believed to be pieces of the statue, to a truck. Dozens of security guards, who parried questions, stopped people from approaching the area.

"Shame on University of Hong Kong for removing the Pillar of Shame," said an alumnus of the school who had come to observe. "It's wrong. It's shameful for them."

The confiscation of the statue comes amid a wider crusade to suppress Hong Kong's memorialization of the events in Beijing over three decades ago when tanks rolled into Tiananmen Square and pro-democracy protesters were killed.

Danish sculptor Jens Galschiot has been seeking to work out an arrangement with the University of Hong Kong (HKU) since October when it initially set a five-day deadline for the work's removal. Previously barred from entry to the city, the artist asserted ownership over the statue but wanted guarantees he would be able to come and carefully disassemble it without legal complications.

"It's terrible that they're destroying it," said Galschiot on Thursday, expressing shock. "It is a disgrace and an abuse and shows that Hong Kong has become a brutal place without laws and regulations such as protecting the population, the arts and private property."

The university on Thursday said that the removal stemmed from external legal advice and an assessment of risk under the city's criminal laws.

"No party has ever obtained any approval from the university to display the statue on campus, and the university has the right to take appropriate actions to handle it anytime," it said in a statement, adding that the university was "very concerned about the potential safety issues resulting from the fragile status" of the work.

The disassembled sculpture has now been placed in storage, the school said, declining to provide the location.

Activists mobilized online to create a 3D model from hundreds of pictures of the statue. Galschiot is encouraging people to print and distribute copies to preserve the "Pillar of Shame." The removal coincides with a changing of the guard at HKU directed by Hong Kong Chief Executive Carrie Lam. Arthur Li, longtime chairman of the university's governing council, is to be succeeded next week by Priscilla Wong, now head of the Independent Police Complaints Council.

The "Pillar of Shame," a two-ton copper statue of twisted bodies with agonized faces, was erected in 1997, the year Britain handed control of Hong Kong back to China. Every year on June 4, the anniversary of the crackdown, university students and members of the Hong Kong Alliance in Support of Patriotic Democratic Movements in China would gather for a ceremonial cleaning.

Since Beijing imposed a national security law on Hong Kong last year, the Alliance's leaders have been jailed, its bank accounts frozen and its June 4th museum shuttered. The group dissolved in September.

The group's annual candlelight vigil for Tiananmen victims was banned both this year and last under COVID gathering restrictions. Members of the group and activists were sentenced last week to up to 14 months imprisonment for proceeding with unauthorized observances at the vigil site. 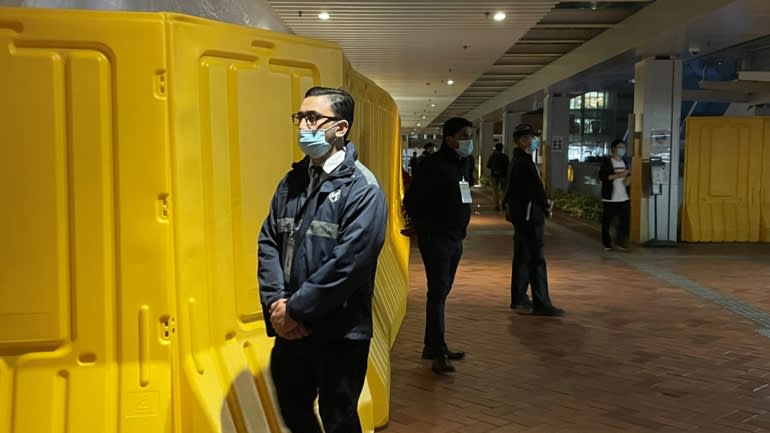 Security guards keep watch by barricades surrounding the "Pillar of Shame" during its removal. (Photo by Maggie Zhang)

Several leaders of the Hong Kong Alliance, which originally brought the "Pillar of Shame" to HKU, have also been charged with incitement to subvert the state.

On the mainland, Beijing has sought to quash any discussion of the 1989 crackdown since it happened. Online, talk of those days is carefully censored, as is the use of numbers that could be seen as referencing the date, such as "8964."

The Communist Party made a rare public reference to the event in a historical resolution last month, describing it as a "political storm" caused by "hostile global anti-communist forces," without mentioning any details.