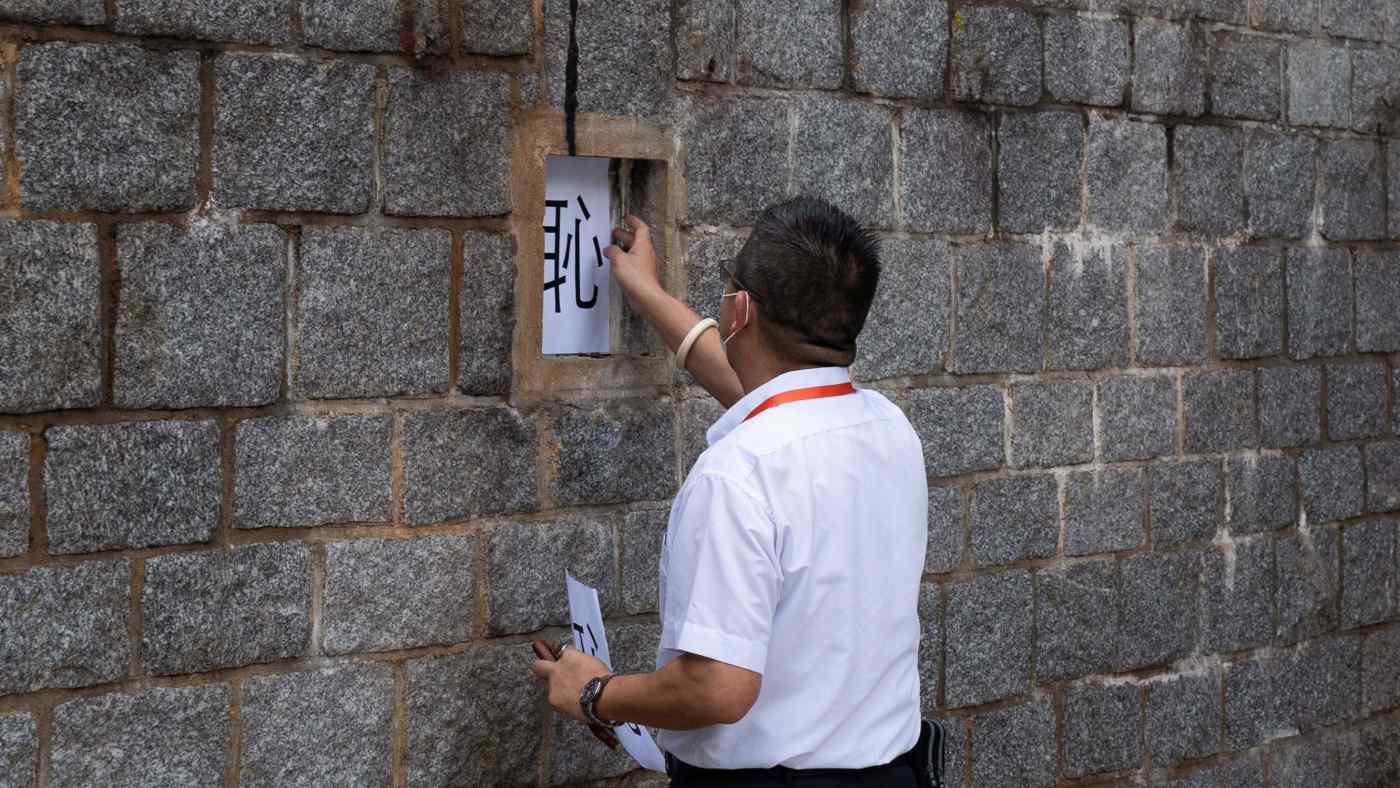 The disappearances come a day after the University of Hong Kong cut down and moved into storage the iconic "Pillar of Shame" memorial sculpture that had stood on its campus for 24 years.

The removals of the three memorials, along with one on the campus of Hong Kong Polytechnic University earlier, mark the climax of an apparent drive in Hong Kong to suppress memory of the 1989 clampdown over the past six months amid a wider effort to emphasize "patriotism" toward the communist regime in Beijing.

Over the period, a commemorative museum was forced to close, with exhibits removed by police; access to a related website of online memorial galleries was blocked; 20 activists received prison terms of up to 14 months for involvement in a banned memorial vigil last year; the vigil was banned again; and leaders of the group that managed the vigils and museums were jailed awaiting trial on charges of subversion.

"My sculpture was a tribute to democracy," Chen Weiming, creator of the works removed from the Chinese University of Hong Kong (CUHK) and Lingnan University, told Nikkei Asia by phone from the U.S. "Now the Chinese government wants everybody to forget about the true history, so my sculptures are very bad for the Chinese authorities."

Chen has not been allowed to enter Hong Kong since the works were installed at the two campuses in 2010. He heard from CUHK students this week after the University of Hong Kong's action, but neither CUHK nor Lingnan contacted him. Chinese University of Hong Kong's 'Goddess of Democracy,' left, in 2019 and the same location on Friday. (Source photos by AFP/Jiji)

"The day (of removal) came faster than I expected," he said. "If they don't want to display the sculptures any more, they should give them back to me. This is my artwork, and I just lent the sculptures," added Chen, a naturalized New Zealander, warning he might sue if the works have been damaged.

Chen sculpted the 6.4-meter bronze "Goddess of Democracy" that stood at CUHK in homage to a papier-mache version made by students in Tiananmen Square in 1989.

As with the University of Hong Kong on Thursday, CUHK insisted on Friday that the "Goddess of Democracy" statue had originally been installed on its campus in the face of official opposition.

"The university never authorized the display of the statue on its campus, and no organization has claimed responsibility for its maintenance and management," the school said.

It noted that two groups involved in moving the statue to campus, the CUHK Student Union and the June 4 vigil organizer, the Hong Kong Alliance in Support of Patriotic Democratic Movements of China, had both disbanded in recent months.

"I am shocked that removal came so quickly, though I knew the day would finally come," said a graduate student from mainland China who studies politics at CUHK. "No matter how officials justify their actions, the root cause of the demolition is still political considerations."

An image of the "Goddess of Democracy" outside the office of the school's student union was covered with gray paint, according to a social media post by the group.

"In the best interests of the university, the items in question have been cleared, or removed and stored appropriately," said a spokesperson for Lingnan, adding that the moves followed a review that found the works could "pose legal and safety risks to the university community."

A local undergraduate at Lingnan said she found it hard to accept the rapid disappearance of the memorials.

"It is normal for universities to do such things while the political atmosphere has dramatically changed, but this is also evidence that the university and the authorities are working together," she said. Hong Kong Baptist University and the City University of Hong Kong each remain home to smaller versions of the "Goddess of Democracy."

City University on Friday directed the school's student union to remove the statue on its campus. The union told Nikkei Asia on Friday evening that it would "remove it soon."

Baptist officials told local media on Thursday that they will "review the campus environment from time to time, and strive to ensure that there are no items on campus that pose potential safety, operational and legal risks to the university community."

"As participants of the 1989 pro-democracy movement and survivors of the June 4th massacre, we are extremely indignant about this and strongly condemn the actions of the Hong Kong government and the Chinese Communist Party behind it," they said. "The survivors' mission is to preserve and strengthen memories. They can take down one memorial, we will build more!"

Samuel Chu, president of U.S.-based advocacy group Campaign for Hong Kong, noted that the universities had taken action at a time few students were around due to the winter class break, showing that "the shame and cowardice of Beijing runs deep."

"For more than two decades, these monuments stood as signs of Hong Kong's autonomy and freedom -- and their destruction now confirms the demise of 'one country, two systems' and the basic freedoms of expression."