A Huawei-made operating system: How feasible is it? PALO ALTO, U.S. -- Huawei Technologies is preparing to release its own operating system for mobile devices as it faces the prospect of losing access to Google's Android OS and popular apps. But while industry experts agree the Chinese smartphone maker has the know-how to build a workable operating system, whether it will catch on in the global market is up for debate.

Huawei phones sold outside of China run on the Android system, and access to latest updates and technical support from Google is critical for the company. That access is now in jeopardy following the U.S. government's move to restrict exports to Huawei.

For Huawei, the challenge of building its own operating system -- the core software that controls a device's hardware and other software -- is not only technical. The company will also have to win over international users and app developers amid widespread concerns over security.

"Building an operating system is a lot of engineering effort," said Philip Levis, associate professor of computer science and electrical engineering at Stanford University. "One of the hard things about phones is they are so different. For example, screens are not simple rectangles, because sometimes cameras or other peripherals jut into them. This could be a bit easier if it's just for Huawei phones."

But building a mobile operating system that only works with its own devices would not make much sense for Huawei, since becoming a global success in this arena requires a certain amount of mass appeal. That means building a big enough ecosystem and attracting enough apps to use with it. It is a test that Microsoft, BlackBerry and many others failed.

"A company like Huawei that made it a high priority could probably have something reasonably usable -- but not nearly as featured as Android and iOS -- in a year or 18 months, especially given the state of open-source code today," Levis said.

For context, Android Inc. was pitching to investors in 2004 and bought by Google in 2005. The operating system was publicly unveiled in 2007, and the first device running it shipped in 2008. Given that Huawei has reportedly been working on a "Plan B" operating system since 2012, it is reasonable to expect the company to release one this year. 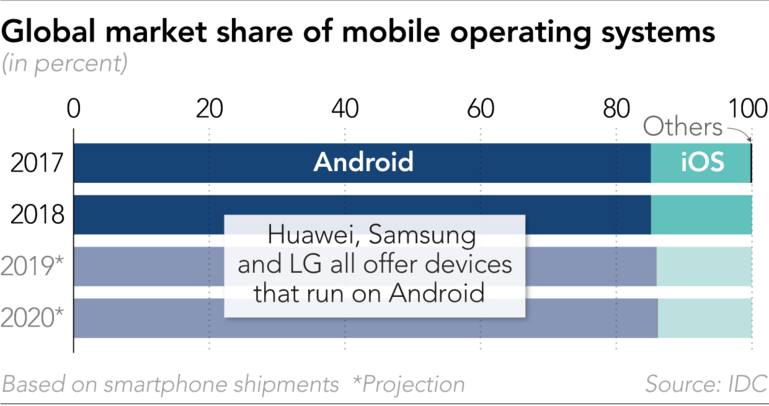 But to compete at the same level as Android, "Huawei has to get developers open to rewriting the apps for their OS and then put millions of apps in the app store," said Neil Shah, research director at Counterpoint, an Asia-based technology analysis company.

One of the biggest reasons Microsoft gave up on its own operating system -- Windows Phone -- in 2017 is because developers never backed the platform.

"We have tried very hard to incent[ivize] app devs," Joe Belfiore, vice president of Microsoft's Experiences and Devices division, tweeted in 2017 when announcing the end of Windows Phone. But, he continued, the "volume of users is too low for most companies to invest."

Nokia's Symbian system and BlackBerry OS faced similar trouble. Neither of those proprietary mobile operating systems was able to gain enough traction to convince companies to develop and maintain apps specifically for them, and both were eventually discontinued, just like Windows Phone.

"It makes no sense for companies to maintain an app in a platform that doesn't have enough users," said Tian Weishu, a veteran Android system developer who has worked for Alibaba's Alipay and Qihoo 360 in China.

Because of the high cost of rewriting and migrating an app to a new operating system, many believe that the Huawei's OS -- reportedly named Hongmeng -- will be built on the open-source Android system.

"Building it on the existing Android system has the advantage that it would make it easier for existing developers to run their apps on it," Levis said. "A totally new structure, however, could let them improve a lot of things."

Huawei has an ace in the hole if it does build a brand-new system requiring major app rewrites: its relationships with China's most important tech companies.

"Huawei has partnerships or at least worked with almost everyone in China. The relationships are likely to ensure the new OS from Huawei will be supported by all the Chinese tech giants," Tian said.

But in order to hit critical mass in terms of number of apps, Huawei might need an extra push from the Chinese government, according to Shah.

"The recent events serve as a reminder to everyone of the power and dominance the U.S. has in technology. China must rethink its strategy to become less dependent," he said. One way to become more self-sufficient would be to have all of China's mobile makers use a new, homegrown operating system, such as the one Huawei says it is working on.

"If all the Chinese brands develop and use a unified operating system, it has a much better chance to compete with Android and iOS than just Huawei doing it by themselves," Shah said.

To gain a similar level of global influence and market share as the two leading operating systems, Huawei would need to not only "dominate the Chinese market" but also make inroads into other countries, Levis said.

And that is where Huawei could face another high hurdle, as the company will inevitably face close scrutiny regarding the security of its system.

"It is not easy for Huawei to reassure users and app developers of the safety of its platform. After all, it is a mobile company, not a software company," Shah said. He added that all Android-based phones are subject to regular security feature screening by Google. Without Google acting as a security controller for its new operating system, Huawei might have a hard time winning over the trust of international customers.

"I have no doubt the Huawei OS will be a success in China. The overseas market? Not so sure," Tian said.

Even if Huawei overcomes the above challenges, there is still one long-term concern looming over its operating system: the underlying chipset.

The chip design architecture of Arm, the semiconductor company owned by Japan's SoftBank Group, underlies 90% of the world's mobile processors, including those used by Huawei. Last week, however, Arm said it is complying with the latest U.S. restrictions against Huawei.

"If Arm cut off Huawei's access to its chip design, this would be a huge hindrance," Levis said.

He added that the two major chipsets on the market now are Intel's x86 and the ARM v8. Huawei might be able to replace ARM with RISC-V, which is open architecture and thus not affected by the U.S. ban. But that may not be an ideal solution, according to Levis. "[RISC-V] has been gaining a lot of momentum, but it's not ready."

According to Wu Hequan, an academic at the Chinese Academy of Engineering, Huawei has perpetually licensed the ARM v8 technology and can manufacture and update chipsets based on the existing v8 technology if necessary, without help from ARM.

Tian said chipsets will not present a problem right away. "The chipset issue is a more difficult problem to solve than the operating system. But it won't affect Huawei's operating system in the short to medium term."