With prices that undercut those of its competitors, Huawei has been expanding in Southeast Asia's 5G market.   © Reuters
KENTARO IWAMOTO, Nikkei staff writerJuly 20, 2020 04:00 JST | Singapore
CopyCopied

SINGAPORE -- Huawei Technologies faces increasing headwinds in the global race for 5G network equipment, with Singapore becoming the latest country that has partnered with European makers for the high-speed internet infrastructure.

Last month, the city-state's major telecom operators Singapore Telecommunications and StarHub-M1 consortium said that they had selected Sweden's Ericsson and Finland's Nokia, respectively, for the 5G network partners as they aim to start services next January.

As a result, Huawei lost out in the key roles in Singapore, though the government stressed this did not mean a rejection of the Chinese maker.

Now that Southeast Asia's richest and most technologically advanced nation has opted for the European companies, the next focus is other countries in the region.

Companies and individuals are tending to make greater use of the internet for remote work and education, e-commerce, and video streaming due to the coronavirus pandemic. Southeast Asia's telecom operators are gearing up to launch 5G services because the current situation has amplified demands for industrial and commercial high-speed internet infrastructure.

Thailand's largest mobile operator Advanced Info Service in May revealed that the company had set aside up to $1.2 billion for investment in 5G network expansion, aiming to cover around 13% of the total Thai population by the end of this year. Vietnam's three major telecom operators, Viettel, MobiFone, and Vietnam and Telecommunications Group (Vinaphone), all of which are state-owned, completed 5G trials in major cities by April.

Huawei, with price competitiveness that many experts often point out is roughly 30% cheaper than Ericsson and Nokia, has been actively expanding in Southeast Asia. It has been working with AIS for its national 5G network. It has also partnered with Malaysia's Maxis to launch 5G in the country, and in the Philippines, it works with Globe Telecom for pilot 5G services. Pro-China Cambodia uses Huawei as well.

Meanwhile, competitors are also expanding their partnerships in Southeast Asia. AIS' local rival True Corp. in April selected Ericsson as a vendor for a radio access system as part of its national 5G network, by which Ericsson will provide the system in three regions in Thailand. That Singtel selected Ericsson therefore would give further momentum for the Swedish maker.

Yet, Huawei still seeks opportunity in the city-state. "We will build on [its track record] in Singapore, supporting our customers as they invest in their 5G networks, boosting economic growth and helping Singapore continue to compete globally," a spokesperson told the Nikkei Asian Review.

Singapore's decision itself "will likely have little to no impact on Huawei's global 5G race," said Sofea Zukarnain, research associate at consulting firm Frost & Sullivan. She pointed out that Huawei, despite not being selected for Singapore's main network infrastructure, will still be involved in the broader ecosystem with a smaller role in the city-state. 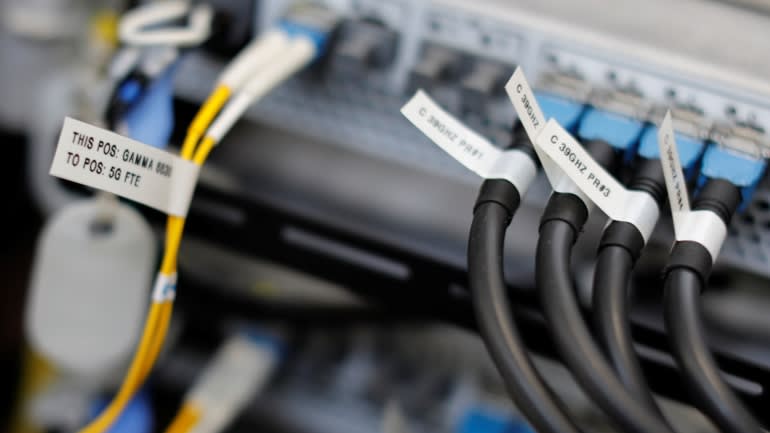 These fiber-optic cables are part of a 5G antenna system made by Ericsson for AT&T's 5G wireless network that has been installed in U.S.   © Reuters

So far, one of the few countries that have clearly opted for non-Chinese makers is Vietnam. Viettel has collaborated with Nokia, and it has also developed its own 5G equipment, enabling the company to bypass the 5G devices supplied by Huawei.

Singtel is not only the island-state's leading telco, but is also influential in Asia.

It has stakes in Thailand's AIS, Indonesia's Telkomsel and the Philippines' Globe Telecom, as well as Bharti Airtel in India. Although these companies' 5G partners would primarily depend on local regulators' preferences, Singtel's choice could potentially matter, as it is a major shareholder and might gain economies of scale in procurement.

The administration of U.S. President Donald Trump has been intensifying efforts to cripple the Chinese maker over the past weeks amid the coronavirus turmoil, which could affect countries that are still open to Huawei. The U.K., which initially did not exclude Huawei, is reviewing its 5G plans, as diplomatic tensions rise over Hong Kong,

India also plans to exclude Chinese makers from its 5G trials after last month's border clash with China, according to local reports. The South Asian country also banned Chinese apps such as TikTok and WeChat.

These add to the growing list of countries that have banned Huawei, such as Australia, which in 2018 decided to exclude Huawei and ZTE from participating in the country's 5G networks due to security concerns.

"The momentum in favor of secure 5G is building," U.S. Secretary of State Mike Pompeo said on June 24 in a press statement. "The more countries, companies, and citizens ask whom they should trust with their most sensitive data, the more obvious the answer becomes: Not the Chinese Communist Party's surveillance state."

In Southeast Asia, tensions are also rising over the South China Sea, as China steps up activities in the area after emerging more quickly from the coronavirus pandemic than Southeast Asia. Such a political dispute could loom over economic issues like 5G procurement.