Huawei CEO slashes impact of US blacklisting to $10bn from $30bn

Chinese group has eased its reliance on American tech for 5G 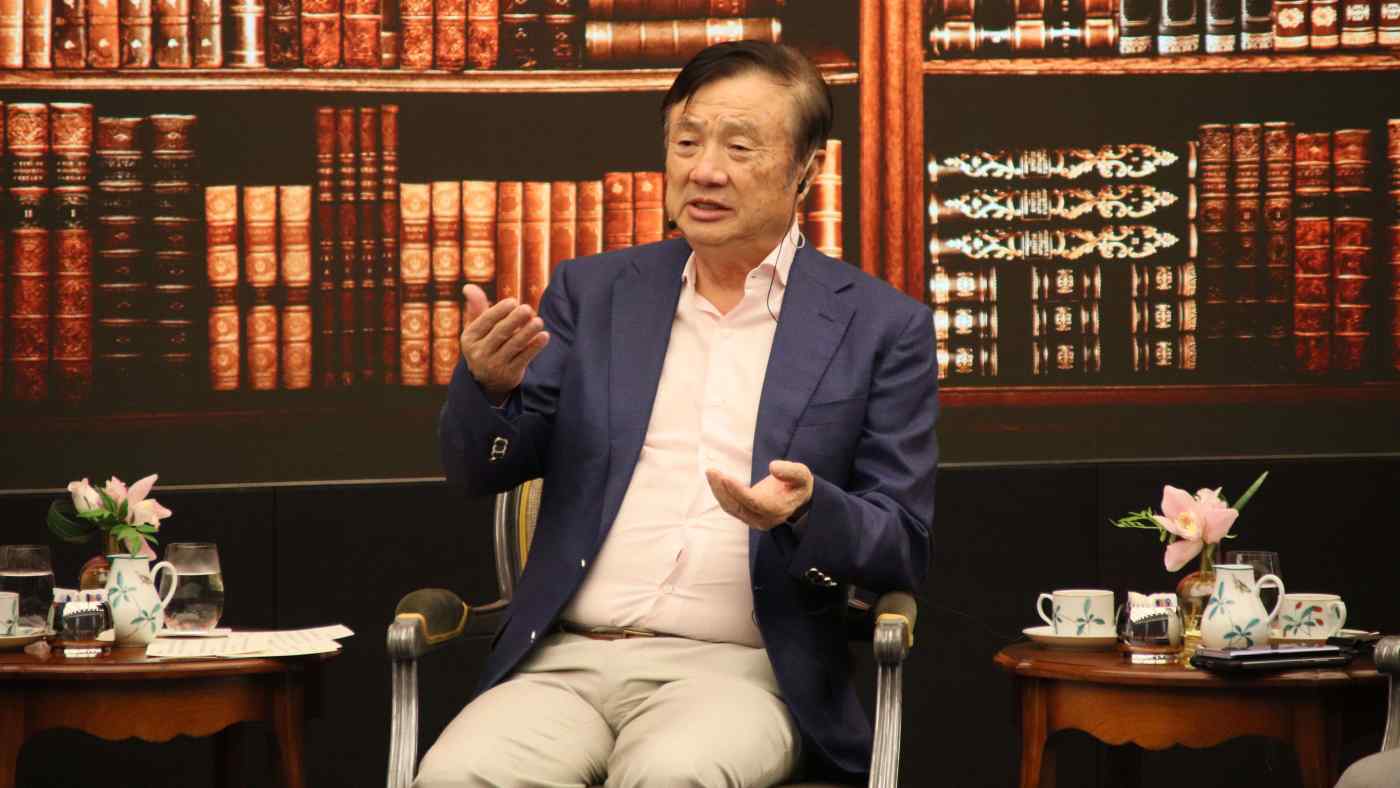 SHENZHEN/TAIPEI -- China's Huawei Technologies, the world's top telecom equipment company, on Thursday slashed the estimated revenue damage from U.S. sanctions by two-thirds to $10 billion and said it now could survive without American suppliers.

Founder and CEO Ren Zhengfei, speaking at the company's headquarters in Shenzhen, adopted a public relations pose that mixed charm and defiance.

Ren extended an olive branch to Washington as he offered to license Huawei's fifth-generation wireless technology to "a U.S. company." He also pledged a "no back door agreement" to try to soothe American fears about covert Chinese surveillance.

But the CEO then said that Huawei had found alternatives free of U.S. technologies for all its 5G device production in the wake of Washington's blacklisting. Ren also scaled back the hit to the company's revenue goal from those sanctions to around $10 billion, down from $30 billion in June.

"Whether or not Huawei can produce [5G equipment] without the access to the U.S. supply chain? Yes, we can," Ren said. "But we are still willing to use American components."

Ren also said Huawei has begun development of 6G technology -- the next generation of mobile communication -- and he expressed confidence the Chinese company will eventually lead this field.

Ren's remarks came a week after Huawei rolled out its first smartphone without Google Mobile Services, including the Google Play Store, Google Maps, Gmail and YouTube. People visit a Huawei exhibit at the IFA consumer technology fair in Berlin on Sept. 6.   © Reuters

U.S. President Donald Trump said this month that his administration would not include Huawei in the trade talks with China. But some American companies such as Qualcomm, Micron Technology and Texas Instruments have said they found ways to resume some shipments to Huawei, one of their top customers.

Meanwhile, the Chinese company has accelerated development of semiconductors as well as its own operating system, Harmony OS, as part of Beijing's strategic push to become the world leader in future technologies such as artificial intelligence.

Washington placed Huawei, the world's second-largest smartphone maker, on a trade blacklist in May due to growing fears that its equipment could be used by Beijing to spy. Huawei has repeatedly denied such allegations, but the trade ban has forced the company to scramble for alternative suppliers to meet its technological procurement needs of $70 billion to $80 billion annually.

"We could never prestock that many components," Ren said. "We do have our own technologies, and our production did not stop for a single day following the U.S. restriction."

Huawei's revenue will rise next year even if the growth is smaller, he said, and "by the end of next year, people will believe that Huawei indeed survives."

"If American companies are able to sell components to us, we will definitely buy from them, even if that means we would have to scale back the production of our own components," he said. "What we were forced to do in a short term does not represent our long-term strategy."

But in almost the same breath, the founder said it was just a matter of time before China matched American technology.

"The total decoupling of U.S. and China technologies is not possible," he said. "After all, we will know what these American scientists are doing if they release their research in the internet age. They can never live in the refrigerator."

Huawei is willing to exclusively license its 5G wireless technology to a U.S. company, Ren said, hoping to ease security concerns. But he also suggested that Huawei would share 5G tech with only "one American company," saying the U.S. is the only leading nation lacking such advanced technologies.

The CEO first raised selling the company's 5G tech and patents to others in an interview with the Economist on Sept. 10.

"We would want to license to an American company our 5G source codes, patents, as well as our chip design and production experiences," Ren said. "We want to help the U.S. to compete in 5G at the same starting point with us ... Europe, Japan, South Korea all have their own 5G tech already."