Huawei to more than halve smartphone output in 2021 TOKYO -- Huawei Technologies has notified its suppliers that its smartphone component orders will fall by more than 60% this year, Nikkei has learned, as U.S. sanctions continue to bite.

The company's component orders have been limited to those for 4G models as it lacks U.S. government permission to import components for 5G models. Some of the suppliers indicated the figure could be lowered to nearly 50 million units.

The embattled Chinese tech giant last year fell to No. 3 in the global smartphone industry, behind Samsung Electronics and Apple, according to research company IDC. Huawei is likely to lose further ground this year amid the U.S. export restrictions.

Huawei declined to answer Nikkei inquiries regarding the matter.

Huawei in November sold its Honor budget brand to a consortium of more than 30 Chinese companies in a bid to help Honor regain access to critical components and parts subject to the U.S. restrictions.

While some of Huawei's suppliers have obtained permission from the U.S. Department of Commerce to ship parts, the company still lacks access to core components for 5G models. 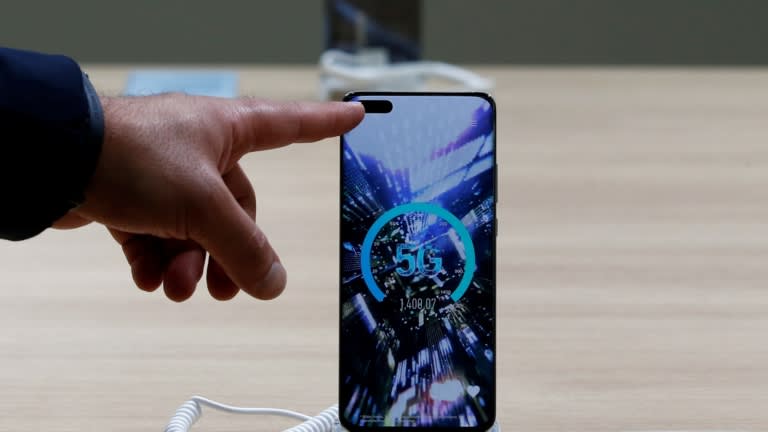 Huawei was ahead of Apple and other smartphone makers in shipping 5G models.   © Reuters

There have been news reports that Huawei may sell its mobile phone business altogether. Asked about this, Huawei Technologies CEO Ren Zhengfei told a media outlet that he would "never" take that path. But according to an executive at one supplier, Huawei has not been able to procure the necessary components.

There were hopes in China that U.S. President Joe Biden, who took over from Donald Trump last month, would ease off his predecessor's hard-line approach to China trade, including in regard to semiconductors and related equipment. But it now appears the new administration will maintain Trump's combative stance.

Gina Raimondo, the U.S. Commerce Department secretary nominee, earlier this month said she currently sees no reason to remove blacklisted companies from the department's Entity List because most were included on it for national security or foreign policy reasons.