LONDON -- Finnish telecommunications equipment maker Nokia is stepping up efforts to expand its market share in China where it has struggled to secure a foothold.

Despite years of operation, Nokia has not managed to crack the Chinese market and it now hopes a new CEO, Pekka Lundmark, will push the company's plans forward in one of the largest, and yet most competitive, markets in the world.

In particular, Nokia is hoping to penetrate China's fifth-generation infrastructure industry where it faces Huawei Technologies, a key 5G infrastructure builder. Worsening relations between Beijing and Washington also casts a shadow over its fate.

China has made huge investments in high-tech sectors such as artificial intelligence on which new technologies, such as smart appliances, smart cars and industrial automation, depend. To this end, it has harnessed data from its population of 1.4 billion and is investing in 5G to enable the communication of this vast trove of information.

Investments in 5G-related sectors by China's top three telecoms carriers is expected to total 180 billion yuan ($25.2 billion) this year, a more than fourfold increase from a year earlier. Nokia, Huawei and Ericsson are leaders in 5G and, together, control about 80% of the global market for mobile base stations.

By end April, Nokia said it had signed 5G-related contracts with about 70 of the world's telecoms companies, but those in the greater China region, including Taiwan, represent only 6%. 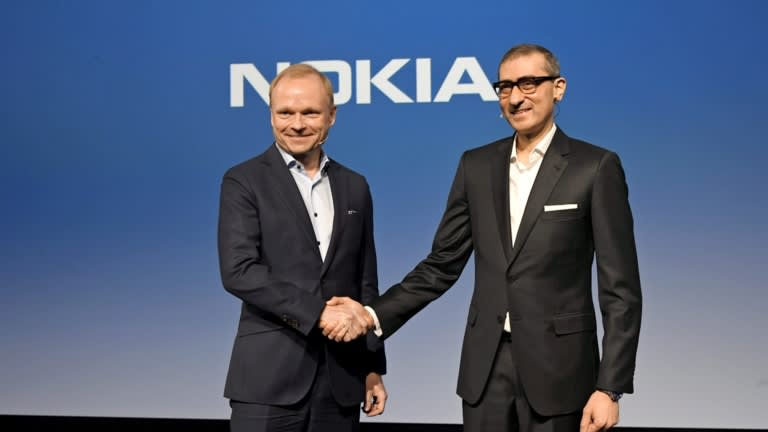 Nokia CEO Rajeev Suri, right, shakes hands with Pekka Lundmark, who will take over his position in September.   © Reuters

In September, Lundmark will take over the helm as CEO. In a March news conference, he pointed to the broad range of experience he has had in China and said that he would be able to strengthen Nokia's position in the market once he assumed his post.

But China is not the only region where Nokia is coming up against Huawei.

The Chinese company is increasingly making its presence felt in Europe, Nokia's key market. Huawei has signed 91 contracts with telecoms providers to commercial 5G, of which nearly 50 are in Europe. In February, Huawei said it would construct a 200 million euro ($222 million) communications equipment plant in France, with the aim of increasing orders in Europe.

Huawei's products are believed to be 20% to 30% cheaper than those of Nokia and Ericsson. It has invested huge amounts in research and development, and its products are well received and highly reviewed in Europe. Despite U.S. sanctions on Huawei, some European telecoms providers are still keen to do business with the Chinese company.

In view of Huawei's moves in Europe, the U.S. is also trying to give a leg-up to American companies that promote cloud services and network virtualization on the continent. Altiostar Networks, which supplies base stations to Rakuten, is one of these companies. Nokia now finds that even in Europe, it is becoming an increasingly crowded field in part because of the rippling effects of U.S.-China tensions. Nokia was once an ubiquitous name in mobile phones, capturing half of the global market. But it has largely fallen behind as other companies moved into the production of smartphones over the last 10 years and Apple Inc. and Samsung Electronics became global leaders.

In 2013, Nokia sold the mobile phone business to Microsoft and Suri took over as CEO immediately after that sale.

Under his leadership, Nokia bought Alcatel-Lucent, a French telecommunications equipment maker, in 2015 for some 2 trillion yen ($18.6 billion). He successfully led the mobile phone maker's transformation into a telecommunications infrastructure company.