Canada will remain "steadfast and strong" in demonstrating that "randomly arresting Canadians doesn't give you leverage with the government of Canada anywhere in the world," Trudeau said.

Bowing to such moves, he argued, would only endanger millions of Canadians.

Trudeau's comments came a day after Chinese Foreign Ministry spokesman Zhao Lijian appeared to suggest a link between Meng's case and those of Michael Kovrig and Michael Spavor, held in detention for 18 months and denied consular access since January. Kovrig, a former diplomat, and Spavor, a businessman, were formally charged with spying by Chinese prosecutors last week.

Referring to suggestions that Canada's justice minister could halt the extradition, Zhao said that "such options are within the rule of law and could open up space for resolution to the situation of the two Canadians."

This seemed to contradict Beijing's stance that the charges against Kovrig and Spavor have nothing to do with Meng's house arrest in Vancouver for extradition to New York, where she would face bank fraud and other charges related to alleged violations of U.S. sanctions against Iran.

The tense standoff between Canada and China comes just as they approach their 50th anniversary of diplomatic relations. Trudeau has found himself in a political corner, torn between critics who want him to stand firm and those who believe the priority should be securing the pair's freedom.

The pressure only intensified on Wednesday, with the release of a letter to Trudeau from a group of 19 former parliamentarians, senior diplomats and others, including two former foreign affairs ministers. They urged the prime minister to halt Meng's extradition.

Yet others warn that Canada should not succumb to "hostage diplomacy" and that there is no guarantee China would free the Canadians anyway. Canadian Prime Minister Justin Trudeau speaks in parliament in May. He has said it is "obvious" that the detainment of Kovrig and Spavor was "a political decision made by the Chinese government."   © Reuters

As recently as Monday, the Chinese foreign ministry spokesman had insisted that the cases were not connected and admonished Trudeau, insisting he should refrain from "irresponsible" remarks that their detention is arbitrary and politically motivated.

Trudeau fired back that from the very first few days of their detention, Chinese officials were highlighting Meng's arrest on Dec. 1, 2018. "It has been obvious from the beginning that this was a political decision made by the Chinese government and we deplore it, and have from the very beginning," Trudeau said earlier this week.

He vowed "no deal" to release Meng in exchange for their freedom, saying Canada must protect the independence of the judicial system. China countered that Canada and the U.S. have "double standards" as they seek intervention in China's legal procedures.

The first public appeal from Kovrig's wife added to the heat on Trudeau.

"They are pawns in this geopolitical game and it's time for us to take action," Vina Nadjibulla told the CBC, Canada's national broadcaster, on Monday. "Words are no longer enough."

Nadjibulla cited legal opinion that Canada's justice minister has the authority to intervene in the extradition process at any time. The government rejects that position, saying the minister's role comes only after the judicial hearings are finished.

It was in reference to Nadjibulla's plea that Zhao made his comment on Wednesday about "such options" being available to Canada. But Trudeau quickly quashed that notion with his statement on Thursday.

The saga is unlikely to end anytime soon. Legal proceedings in each country may take years to unfold, with the Canadians subject to a secret trial that could lead to a sentence of life in prison.

Meng, the daughter of Huawei CEO Ren Zhengfei, lost the first round in her effort to stop the extradition hearings. A May 27 ruling by the Supreme Court of British Columbia found that a "double criminality" requirement had been met. It said Meng's conduct "would have amounted to fraud" in Canada. The court rejected Meng's argument that the extradition order is invalid because Canada had no sanctions against Iran.

On Tuesday, a judge approved a new schedule that will see Meng's hearings stretch at least into April 2021, due to disruptions from the coronavirus pandemic. 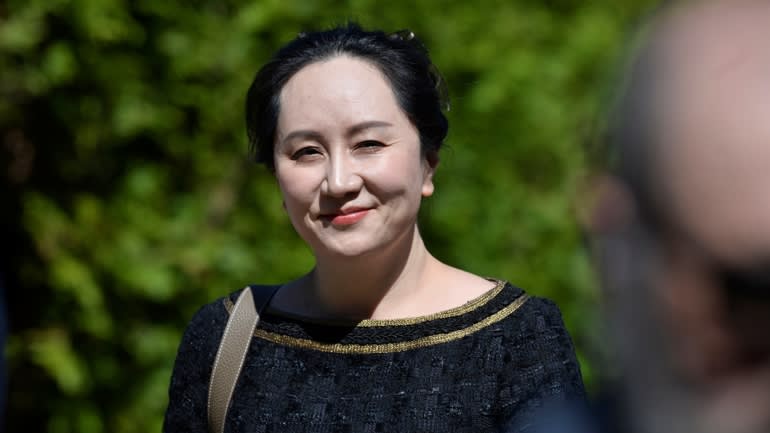 Huawei's Meng leaves her Vancouver home for a court hearing on May 27. She lost the first round of her fight to stop her extradition to the U.S.   © Reuters

Last fall, Canada's Global Affairs ministry reported that -- one year ahead of the October 2020 anniversary of Canada-China diplomatic relations -- "the bilateral relationship is in unprecedented crisis, with relations at their lowest ebb since formal ties were established in 1970."

The relationship has "bottomed out" and stabilized since then, Yves Tiberghien said in an interview with the Nikkei Asian Review. He is a distinguished fellow with the Asia Pacific Foundation of Canada and political science professor at the University of British Columbia.

As evidence that basic diplomatic channels still work, Tiberghien cited China's assistance in the evacuation in February of hundreds of Canadians from Wuhan, the epicenter of the coronavirus outbreak; and Chinese suppliers providing masks and other medical equipment to Canada after U.S. President Donald Trump moved to block American shipments.

A ban China declared on Canadian meat imports was lifted after a few months, as pork supplies in China were cut by swine fever. A ban on canola imports from Canada remains, however, causing a loss of more than $1 billion for producers.

Trudeau's critics say his initial reaction of "disappointment" over China formalizing the espionage charges last Friday was too weak. Some call for sanctions under the Magnitsky Act to deny visas or freeze assets of Chinese officials.

"We have been raising the alarm about this government's failure to stand up for Canada and its policy of appeasement to the regime in the People's Republic of China," said Conservative leader Andrew Scheer.

Tiberghien, though, predicted that tougher actions by Canada would trigger "a cycle of retaliation." The government's approach so far is to create "reputational loss" for China, he said.

A Global Affairs memo cites more than 1,000 diplomatic engagements around the world with "the message that China's actions against Canadian citizens represent an unacceptable breach of the rules-based international order."

U.S. Secretary of State Mike Pompeo has called for the immediate release of the Canadians. On Monday he said the charges against Kovrig and Spavor are politically motivated and completely groundless. "The United States stands with Canada in calling on Beijing for the immediate release of the two men and rejects the use of these unjustified detentions to coerce Canada.

"Additionally, we echo Canada's call for immediate consular access to its two citizens, in accordance with the Vienna Convention on Consular Relations, as China has prohibited such access for almost six months, and the world has no knowledge of the two Canadians' condition."

Sunday was the deadline for China's prosecutors to proceed with formal charges, Tiberghien said. Kovrig, a senior adviser on Northeast Asia with the International Crisis Group think tank, is in a detention center in Beijing. Spavor, who ran a company specializing in tourism and investment in North Korea, is being held in the northeastern province of Liaoning.

China has cited COVID-19 restrictions for the denial of consular access to the two men, in which diplomats could bring books and letters monthly. Yet, Tiberghien said, consular access has been granted by phone or video conference to other prisoners during the past six months.

The case of Kevin Garratt, a Canadian detained in China for two years, is considered a possible guide to what may happen. Kevin Garratt, a Canadian detained in China for two years, ran this coffee shop with his wife in Liaoning Province.    © Reuters

Garratt was detained in China in 2014 in what was believed to be retaliation for Canada's arrest of Chinese citizen Su Bin on a U.S. extradition warrant. He was released after Su Bin waived extradition and pleaded guilty to charges in the U.S. related to defense spying.

Guy Saint-Jacques, the former Canadian ambassador to China who handled Garratt's case, testified in the spring at a parliamentary committee hearing on Canada-China relations.

"We should not expect any progress until Mrs. Meng is released," he said.

"On the trade front, our exports last year to China dropped 16%, or $4.5 billion, and will likely drop further this year because of the impact of COVID-19 and the trade deal between China and the USA. Plus, we could be subject to further measures if the government decides that Huawei will not participate in 5G development in Canada. In summary, we have to brace ourselves for years of difficult relations."