NEW YORK -- The "tide is turning" against Huawei Technologies as a number of countries exclude the Chinese company from their 5G infrastructure, U.S. Secretary of State Mike Pompeo says, framing it as a win for security.

The U.S. foreign policy chief on Thursday cited "a transatlantic awakening to the truth of what's happening" on China issues including "Huawei, an arm of the Chinese Communist Party's surveillance state."

A day prior, Pompeo said in a statement that the momentum in favor of a "secure 5G" is building. "The more countries, companies, and citizens ask whom they should trust with their most sensitive data, the more obvious the answer becomes: not the Chinese Communist Party's surveillance state." The U.S. State Department lists telecom companies around the globe that allow only trusted vendors in their 5G networks, calling them “clean telcos.”

Only a month ago, Scandinavian news agency TT quoted Sweden's digital development minister, Anders Ygeman, as saying he sees no problem with using Huawei. The Chinese company reportedly is used in the country's first public 5G network, rolled out by carrier Tele2 in May.

Former British Prime Minister Tony Blair said Thursday that his country will ultimately have to side with the U.S.regarding the Huawei issue.

"We do need to make a call, and I think it's got to be pro-U.S. in the end," he said in a livestreamed interview with Reuters Newsmakers.

"It's a problem for us because ... Huawei [has] an infrastructure that we need that is already quite embedded, and the truth is it's a lot cheaper than the alternatives that are being developed up to now," Blair said. 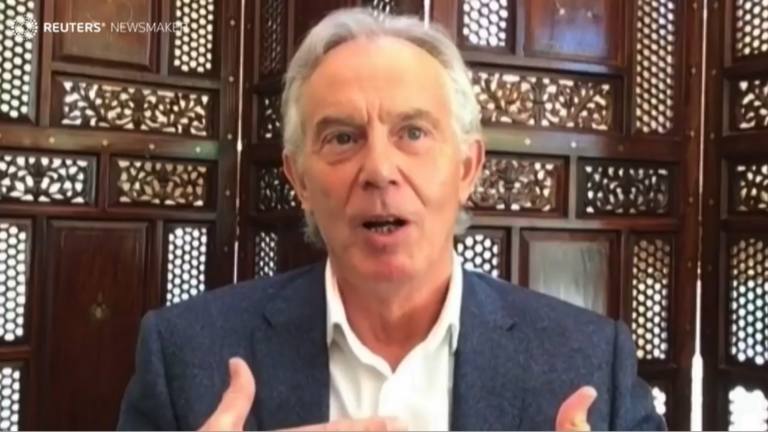 Former British Prime Minister Tony Blair, speaking with Reuters via videoconference, said the U.K. has to be pro-U.S. on any issue that touches security.

The U.S., led by Pompeo, has campaigned over the past few years to deter others from using Chinese telecom equipment, citing national security risks posed by companies like Huawei. Washington in some cases has threatened to end intelligence sharing with countries that use Huawei gear.

Some European leaders including Germany's Angela Merkel have been hesitant.

Current British Prime Minister Boris Johnson previously allowed a role for Huawei in the U.K.'s 5G networks, but was pressured by his own party to reexamine that decision. Opposing voices to Huawei's presence there have grown stronger since the coronavirus pandemic, which many blame on Beijing's botched initial response.

The U.S.-China feud over 5G also puts Japan in the crossfire, as Tokyo juggles an ever-stronger economic relationship with Beijing and its strategic reliance on Washington.

"While the U.S.-China relations may become extremely difficult, there is an opportunity to make globally competitive products and systems from Japan," NTT CEO Jun Sawada told reporters. "We will create a system by partnering with reliable countries and players. It is consistent with the trend of economic security."

The Singaporean government, which granted Ericsson and Nokia 5G operating licenses Wednesday, maintained that no vendor was deliberately excluded in the process.