Many expected to boycott election over elimination of popular opposition party PHNOM PENH -- Cambodians have made their final decision on whether to vote in Sunday's general elections. Their choice boiled down to heeding aggressive demands to vote by Prime Minister Hun Sen's ruling party or listening to boycott calls from leaders of an outlawed opposition party.

Election results, including the voter turnout, are to be announced later in the day, but Information Minister Khieu Kanharith, who is also a senior ruling party member, posted on his Facebook page that as of noon, voter turnout had reached 60.95%.

Twenty parties are contesting the 125 seats of the National Assembly, but none are a viable competitor to the ruling Cambodian People's Party. A Supreme Court order in November dissolved the country's largest opposition, the Cambodia National Rescue Party, which gave the CPP a scare in the previous general election, in 2013.

Senior members of the former CNRP used social networks to call on supporters to boycott the election through a "clean finger" campaign. The reference is to the practice of staining the index finger with ink after casting one's ballot.

From France, Sam Rainsy, the former president of the CNRP, on Saturday took to Facebook to send video messages appealing to Cambodians not to vote. "Not going to vote is enough to rescue our country," he said. "Please stay at home or do something or go somewhere and not to go vote in this fake election."

Hun Sen, who had slammed those who choose not to vote as "destroying democracy," turned up with his wife, Bun Rany, at a polling station on Sunday morning on the outskirts of Phnom Penh and cast his ballot. He flashed his stained finger tips to more than 100 reporters and photographers who had gathered. "I am happy today," he said. "But I should not make any comments to respect the law."

Hun Sen has been desperate to get voters to the polls so he can point to an overwhelming victory in extending his 33-year reign by another five years.

Some 8 million people are registered to vote in the election, of which 3 million are believed to be supporters of the former CNRP. If all 3 million decided not to vote, turnout could have dipped well below the 70% rate of 2013, when the CNRP marginally lost to the CPP. 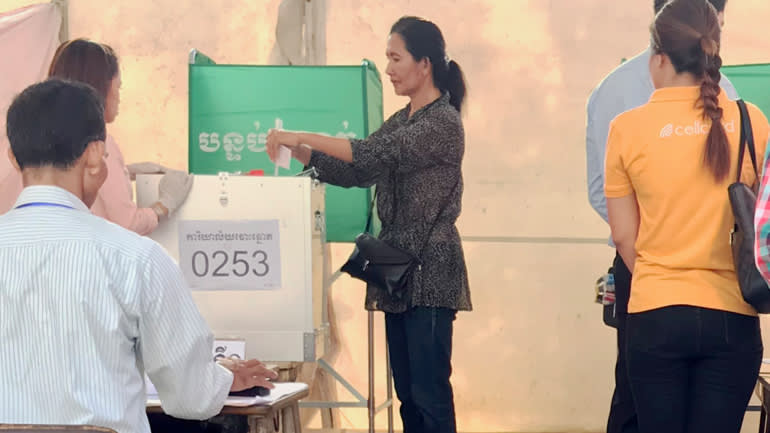 A voter casts her ballot in Phnom Penh early on the morning of July 29. (Photo by Hiroshi Toyofuku)

The government ordered employers around the nation to provide workers with a three-day paid holiday, through Monday, so people in urban areas could return to their hometowns and cast ballots. In the capital of Phnom Penh, many shops and restaurants were left shuttered on Saturday and Sunday, apparently due to a lack of available workers.

Those who chose to vote began arriving at polling stations early in the morning. Many came with their family members or neighbors, and lines formed at some voting places.

"I came today to choose a good leader for our country," said Yem Vinai, a 22-year-old construction materials dealer who was voting at the same polling station as Hun Sen. He had not reached voting age in the previous election, and this was his first national election in which he cast a ballot. "I am very excited," he said showing his stained finger but declining to say how he voted.

Sam Leng, a 69-year-old retiree, said he came to vote for stability. "I want my children to be able to live and do business as usual," he said, hinting that he voted for the ruling party.

Meanwhile, some people opted not to vote. "I don't go to vote in a fake election," said Pouk Chanda, a 48-year-old sports gym instructor who supports the disbanded CNRP. "It is useless to vote for the parties [other than the CPP] because most of them were created by the government to make the election look like a proper competition.

"We want a government that is born from a free and fair election."

The forced dissolution of the CNRP as well as a government crackdown on media and dissenters has drawn criticism from the international community. 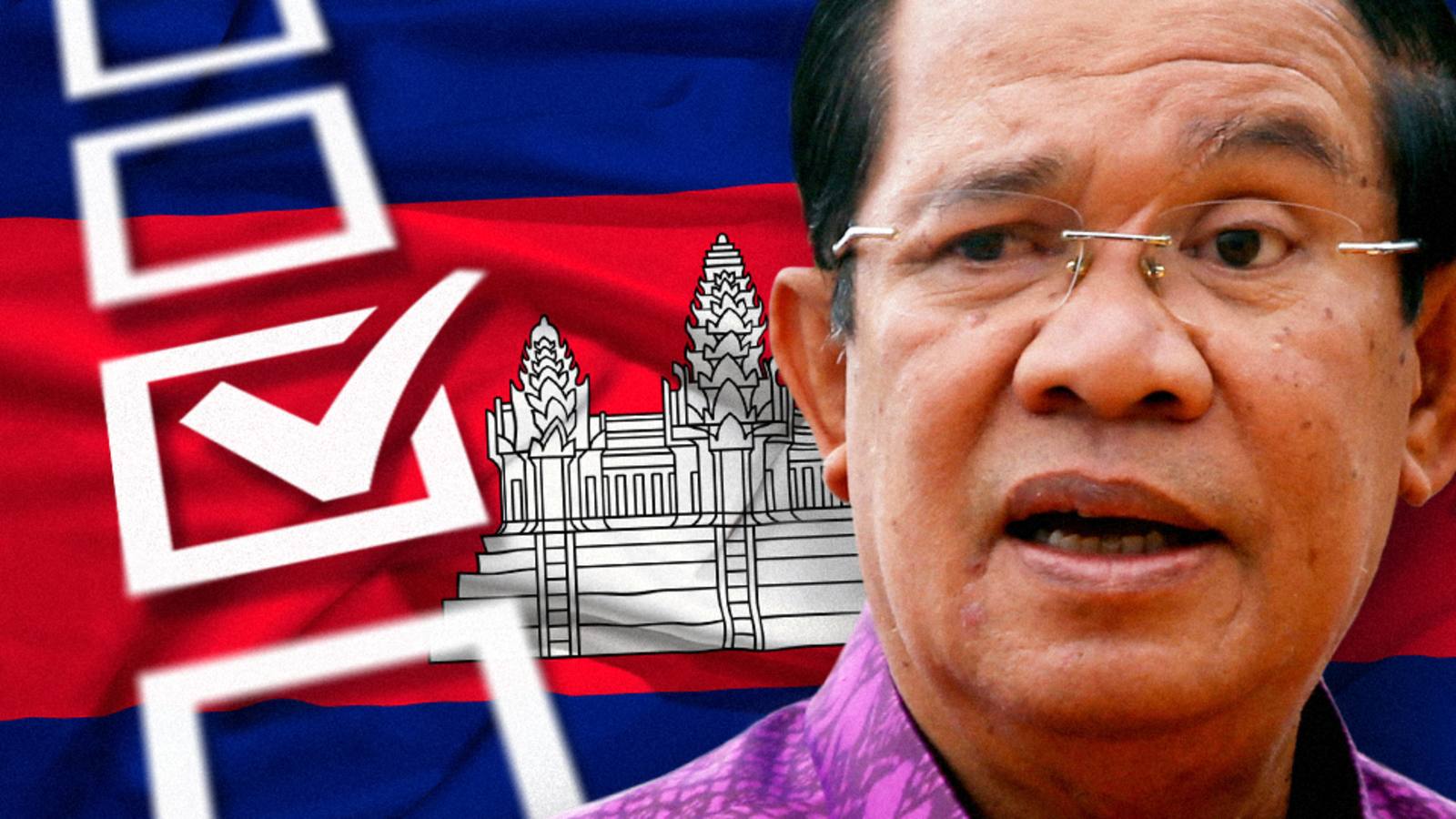 Five things to know about the Cambodian national election

Cambodia's Potemkin election -- what will come next?

The U.S. and the European Union decided not to help fund the elections and have threatened sanctions, such as imposing visa bans on high-ranking officials or even ending preferential tariff treatment. Without the breaks on tariffs, Cambodia's rice and garment industries could suffer.

Japan, a major donor to Cambodia, made a last-minute decision to join Western countries in not providing observers -- and not being seen as endorsing the electoral process.

China, which is rapidly increasing its influence over the Southeast Asian country and has become its largest foreign investor, did send election monitors. So did Myanmar, Singapore and other countries, but China is expected to be one of the first to endorse the election results, regardless of voter turnout.

Beijing wants to expand its influence in the region and sees a prime opportunity in Cambodia. While Western countries distance themselves from Hun Sen and his authoritarian regime, Beijing has been promising billions of dollars in infrastructure and loans.

Cambodia gives China a geographically well-placed ally for Beijing's "Belt and Road" initiative. And through the Association of Southeast Asian Nations, Cambodia helps China make its claims to the South China Sea, which other ASEAN countries contest.

Some 22,000 polling stations were set up nationwide, with 80,000 security officers keeping watch.

Preliminary results are expected to be announced by evening.