PHNOM PENH -- Cambodian Prime Minister Hun Sen is pressing ahead with a treason case against a leading opposition figure who has just been released from house arrest, despite the nation facing European Union trade sanctions over its human rights record.

Hun Sen said on Monday that charges against Kem Sokha would not be dropped as demanded by the EU, Cambodia's biggest export destination. "This case doesn't require one or two days, or one month or two months, it will take a long time," the strongman leader said.

Sokha was arrested in 2017 and faces up to 15 years in prison for what the government has claimed were plans for a U.S.-backed coup. His arrest and the subsequent Supreme Court ruling that dissolved his main opposition Cambodia National Rescue Party (CNRP), saw Hun Sen's ruling party capture every parliamentary seat in last year's national election.

The crackdown, which also targeted civil society and media outlets, sparked an EU review of the country's special trade privileges under the Everything But Arms scheme (EBA).

Losing the preference, which grants duty and quota free access to the bloc for all exports except weapons and ammunition, could be disastrous for the country's 750,000-worker strong apparel and footwear sector, which generated more than $8 billion in exports last year.

The EU last week sent Cambodia its preliminary report on whether to suspend the country from the initiative, which is conditional on countries abiding by human and labor rights set out by the United Nations.

Its findings were not made public but a leaked copy, obtained by Radio Free Asia, reportedly concluded Cambodia had not taken enough steps to address "severe and systematic" violations of its principles.

In a statement, Cambodia's Foreign Affairs Ministry claimed RFA's coverage of the report was "not accurate" but did not provide any details from the document to contradict the outlet's story. It said the government would review the report and submit "an appropriate response that will reflect updates of recent developments."

In a sign of the mounting pressure, authorities last week relaxed house arrest conditions for Sokha, who can now travel in Cambodia but cannot leave the country or participate in political activities. The court also officially closed the case's more than two-year investigation period.

In announcing the charges would not be dropped on Monday, Hun Sen claimed the court process was "independent," an assertion at odds with the track record of Cambodia's politically compliant judiciary. 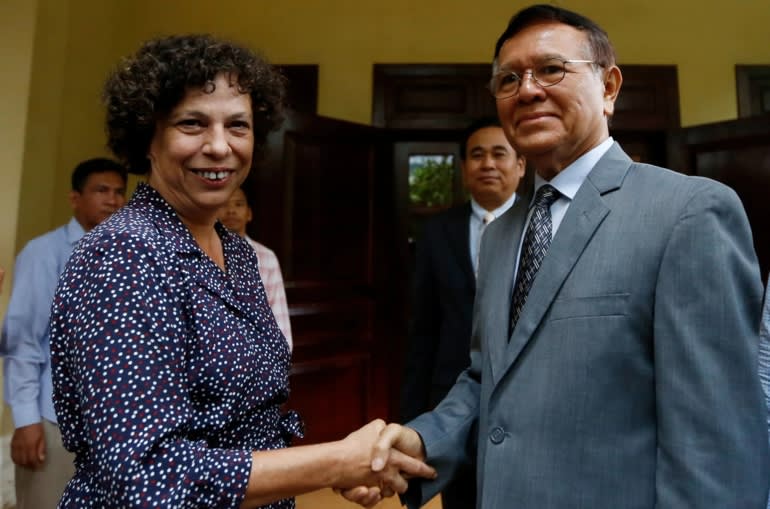 Following a familiar playbook, the moves appeared an effort to soften the oppression of opponents. The government also announced tentative steps to allowing independent media to once again purchase airtime on local radio stations.

Sebastian Strangio, author of "Hun Sen's Cambodia," said using prisoners as "bargaining chips" was a well established practice by the strongman over his 30 years in power.

"These types of concessions have long been part of the political game," he said.

"The pattern has concealed a steady drift towards more and more control in Hun Sen and the CPP's hands," Strangio said. "The EU had to threaten half a billion dollars estimated worth of economic impacts on Cambodia in order to get Hun Sen to back down on this and it's taken a plus to get this concession out of him."

But whether Hun Sen's apparent concessions will sway the EU remains to be seen. While Sokha's improved conditions were welcomed, the move also appeared a strategic ploy to engender a split between the opposition leader and his CNRP co-founder, Sam Rainsy.

"The decision has been made to play Kem Sokha against Sam Rainsy, to dilute, diminish or marginalize Sam Rainsy at the time his status has been rising," longtime Cambodian political commentator Lao Mong Hay told the Nikkei Asian Review. "It's too late and too little," he said of the concessions.

Other analysts, however, still believe the EU is reluctant to inflict the pain of a full EBA withdrawal. Already there have been suggestions from Brussels of a partial withdrawal to avoid hitting garments.

"We... believe that the Cambodian government will continue to take token measures before February 2020 to show the EU its efforts to improve political freedoms and labor conditions in the country," said Fei Xue, a regional analyst at the Economist Intelligence Unit. "And the EU will not fully withdraw Cambodia's preferential trade benefits under EBA, owing to concerns about the catastrophic consequences to Cambodian workers."

While much focus has surrounded Sokha's case, an EU baseline report completed in March this year and obtained by Nikkei lays out the breadth of rights violations the government is accused of that are yet to be addressed.

These range from banning over a hundred opposition politicians and stripping thousands from elected local positions, to weaponizing laws with vague catchall provisions, shuttering NGOs and media outlets, and failing to properly investigate murders of critics.

But China's strong support of Hun Sen's administration has strengthened the prime minister's position compared to previous showdowns with the country's donors, said Joshua Kurlantzick, a senior fellow for Southeast Asia at the Council on Foreign Relations.

"The leverage is less now," he said. "And if the European Union wants to exert that leverage, it still can, it just comes at a greater societal cost than using that leverage would have had against Hun Sen in the nineties."

A long time human rights worker in Cambodia, who asked for anonymity, urged the EU to recognize the extent that the political environment had deteriorated when mulling the value of any concessions from the government.

"In contrast to previous cycles of political tension and detente when Cambodia pretty much ended up where it started, this time around there's been 10 steps backwards and so far only two forward," they said.

"Much more needs to be done for the country to find itself back on a fragile path to democracy it once was embarked onto."