US and EU bolster threat of sanctions before Cambodian elections

As China makes Hun Sen rich, the West reminds him who buys his country's exports

PHNOM PENH -- As Cambodia tilts ever further toward Beijing, looming western sanctions are making many of its leaders, including Prime Minister Hun Sen, nervous.

The U.S. and Europe, whose markets buy almost two-thirds of Cambodia's exports, are edging closer to taking away tariff-free access to their huge markets.

Now in his 34th year of power, Prime Minister Hun Sen has moved further into Beijing's embrace. He also appears stronger than ever; late last year, a court dissolved the country's main opposition party at the government's request.

Both the U.S. and European Union have warned of harsh sanctions on top leaders as well as the cancellation of lucrative tariff-free access to their markets if the Cambodia National Rescue Party is not reinstated and its jailed leader, Kem Sokha, released before the July 29 national elections.

The U.S. made its first major move last week, blacklisting the commander of Hun Sen's bodyguard unit, Hing Bun Heang, under its Magnitsky Act. As if to soothe the wound, Chinese Defense Minister Wei Fenghe arrived later in the week in Phnom Penh bearing a $100 million military grant. 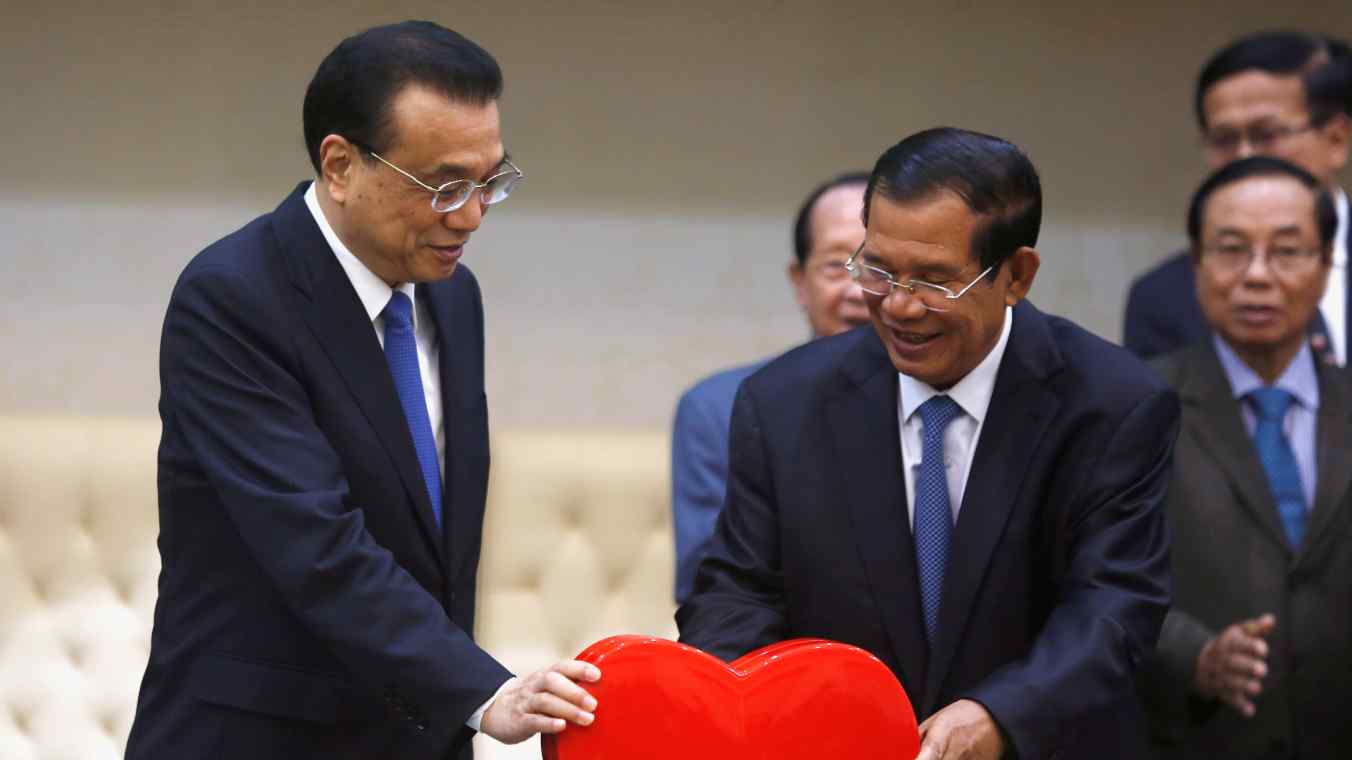 Cambodia acts tough toward US with China in its corner

Sanctions will not resolve the Hun Sen problem

The U.S. announcement came as a shot across the bow of a regime whose leaders are said to keep vast fortunes abroad. The blacklisting forces Americans as well as companies with a U.S. presence to freeze Bun Heang's assets and cease doing business with him.

Yet it was also a message to Hun Sen that the West, burned by past attempts to accommodate the self-described "strongman," plans to be more steadfast, according to Jonathan Bogais, a Southeast Asia expert and senior associate at the Washington D.C -based Center for Strategic and International Studies.

"There has been this game of threatening sanctions, then Hun Sen reacting by giving up just a little bit, and then the threats being lifted," Bogais said. "This has been Hun Sen's relationship with the West. But this time it seems a little more serious -- a very significant amount of exports go to the U.S. and the E.U.

"Hardliners in [Hun Sen's] government will dismiss all of this as irrelevant because they can just line up behind China. But there are also many reformists in the government, as well as a new generation of military personnel, who know that any isolation with China will not be so easy to turn around."

Beijing rains cash on the kingdom, but the U.S. and EU are betting China will struggle to quickly replace their markets as buyers of Cambodian goods.

Thanks to the tariff exemptions, 61.1% of Cambodia's $10.1 billion in exports went to the EU and U.S. in 2016, the most recent year for which official data is available. China bought 6%.

Ou Virak, a U.S.-trained economist and head of the Future Forum think tank in Phnom Penh, said Hun Sen feared the trade threats but believed the West, as it has in the past, would fold after a few token post-election concessions.

But there are many who fear the threats are more serious this time, Virak said.

"Even the Chinese are nervous now," Virak said. "If you look at the garment factories, they are mostly owned by the Chinese, and it's also mostly Chinese [materials] coming into Cambodia, [where Khmer workers] put on the buttons, put on the 'Made in Cambodia' tags."

Top officials in Hun Sen's regime are aware of what is at stake. Although the prime minister in December publicly dared the EU to cut Cambodia's EBA access, a memo from the commerce minister was leaked days later. It says exporters would face $676 million per year in new tariffs if the exemptions were lost.

Most of Cambodia's exports come from a garment industry that employs some 700,000 young people in an otherwise desolate job market that has chased at least 1 million Cambodians abroad in search of work. The country has a population of 16 million.

Some leaders, especially those who recall Cambodia's isolation in the 1980s, are said to be uneasy about Hun Sen's heavy-handedness toward the CNRP. But most have remained silent.

"Every general election for the last 20 years, CNRP leaders and supporters take provocative actions against us to harm the recognition of the election results," Siphan said. "It's nothing new; we don't answer to these people. We don't sell our sovereignty or independence, and our democracy does not belong to the CNRP. They are betraying the people of Cambodia."

Kem Monovithya, a daughter of the jailed CNRP leader and leader of the opposition's recent lobbying in Brussels and Washington D.C., said she holds out hope that calmer heads will prevent serious damage.

"The CNRP is always open for dialogue," Monovithya said. "It is beyond the CNRP's control what will happen to the EBA now. It is only Hun Sen's government that is responsible for whether or not the EBA will be taken away."