NEW DELHI/MANILA/JAKARTA -- Ever since a U.S. drone strike killed Iran's top military official, Swapna Tarafdar's family has urged her to return home to India. But Tarafdar, like millions of Asians living and working in the Middle East, says she is not going anywhere.

"My sister and father-in-law call us every day and want us to return, but we have told them we are monitoring the situation here," Tarafdar, a reporter who lives with her journalist husband and their 5-year-old son in the Omani capital of Muscat, told the Nikkei Asian Review.

There has been much to monitor, from the initial killing of Iranian Gen. Qassem Soleimani on Jan. 3 to Iran's retaliatory strike on a U.S. base in Iraq. This week's decision by U.K., France and Germany to trigger the dispute resolution mechanism of the 2015 Iran nuclear deal has only heightened the sense of crisis.

But for Asia's economic migrants, better pay abroad and a lack of similar opportunities at home trumps such geopolitical concerns. India alone has almost 9 million nationals living and working in the Middle East, and they sent home nearly $40 billion in remittances in 2017, according to the latest World Bank data. Yet the economic benefits are mutual. Unlike Western countries, where immigration is a hot-button political issue, many Middle Eastern countries rely heavily on foreign workers. Of the United Arab Emirates' population of 9 million, for example, nearly 90% is foreign, while of the 10 countries where immigrants make up the biggest portion of the population, seven are in the Middle East.

Economic realities, however, do not mean families back home worry less.

Anita Chamoli, a homemaker in Noida, outside New Delhi, has a daughter who has worked as a private school teacher in the United Arab Emirates for four years.

"We are really worried about the situation in the region due to the latest U.S.-Iran tensions," said Chamoli, whose husband is retired, and so depends on her daughter's remittances to lead a comfortable life. "I wish my daughter [would] return to India, but she is not interested because the Gulf has better job opportunities and pay packages," she added. The Philippines also has a sizable workforce in the Gulf, around 2.1 million, according to the foreign ministry. As with their Indian counterparts, they believe they can earn more abroad, even in a war zone.

Ruby Los Banos, a 39-year-old Filipina, posted a YouTube video of her tour around the Iraqi town of Erbil on Jan. 9 -- the day after Iran carried out missile attacks on U.S. airbases in Al Asad.

"No bombs, no blasts. It's business as usual," said Los Banos, who works as an administrative clerk at a construction company in Iraq.

Philippine President Rodrigo Duterte, with his keen nationalist instincts, is acutely aware of these migrants' situation and of their families back home. After the killing of Soleimani, he immediately ordered the military to prepare for the repatriation of thousands of Filipinos from the Middle East, including 1,640 in Iraq and 1,600 in Iran. 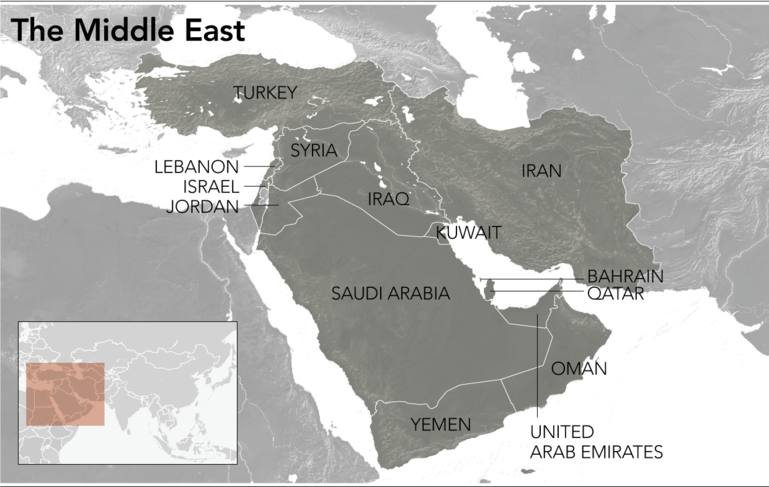 Yet many, like Los Banos, say they prefer to stay.

"We've been talking about [repatriation] here, but they don't want to go back to the Philippines because they earn much more here," she told Nikkei.

Los Banos, who used to work as an administrative staff member at a U.S. military base in Iraq, earns $1,000 a month, excluding bonuses when her company secures new contracts. A similar job back home earns around $300-$400.

A single parent, she sends half her salary to her aging parents, who look after her 7-year-old son.

It is a story repeated by the world's estimated 240 million economic migrants, from Central Americans in the U.S. to Northern Africans in southern Europe. The difference with Asians is their sheer numbers -- over 100 million migrants in total -- and the fact that the economies of their home countries are fast-growing.

Roel Cardenas, a company driver in Erbil, is not keen on being repatriated either, especially now that he has to send more money back home after a typhoon ravaged his family home in the central Philippines.

The 45-year-old breadwinner earns around $1,000, which helps his family make ends meet and buy medicine for his parents. A driver in the Philippines makes around $300 a month.

"I am not in favor of being repatriated without a guarantee that we will have jobs in the Philippines," Cardenas told Nikkei. 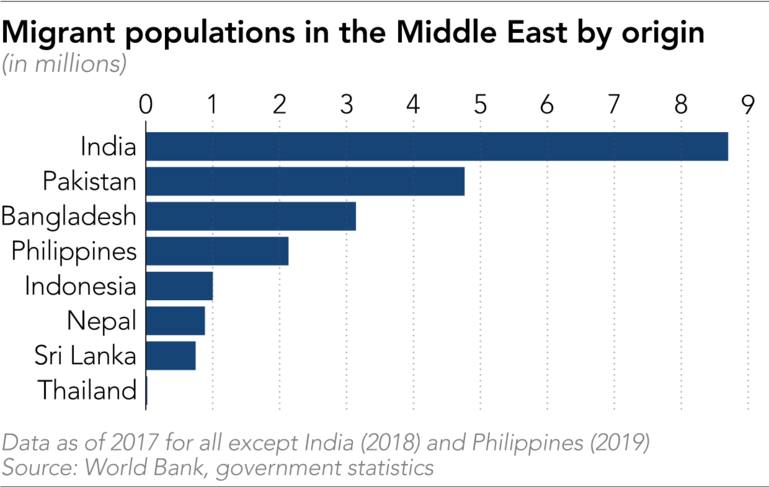 So far, Duterte’s emergency plans have not been triggered. While the standoff with the U.S. remains tense, attention has lately swiveled away from foreign pressure to Iran's domestic situation. Government protests have erupted after security forces accidentally downed a commercial airliner outside of Tehran, killing all 176 on board.

Despite such risks -- be they domestic, or foreign-generated -- employment remains a powerful motivation for immigration, not least for Asians who send home billions of dollars every year.

Many of them come from Southeast Asia, including Indonesia, which receives nearly $5 billion worth of remittances a year. Ayra Ardhani, a college student in Pontianak, Indonesia, is worried about her aunt, who works at a hospital in Oman.

"I'm mostly worried because my auntie is the main supporter for my grandmother and her own family. Her husband is a construction worker, only working on a project by project contract," she said.

Ayra Ardhani said her family's concerns are greater than during the Iraq War, "because so many people said it would be World War III."

She also had scathing words for the leaders involved in the current tensions: "This is very unnecessary. Why must leader like Trump use social media to act so stupid instead of calming the situation?"

Her aunt, however, like many working in the region, remains optimistic. "Last time we had a chat with my aunt she [said she] believed everything would be all right. The company that hired her assured they have safety measures in place."