Destroyer to follow early next month to protect sea lanes 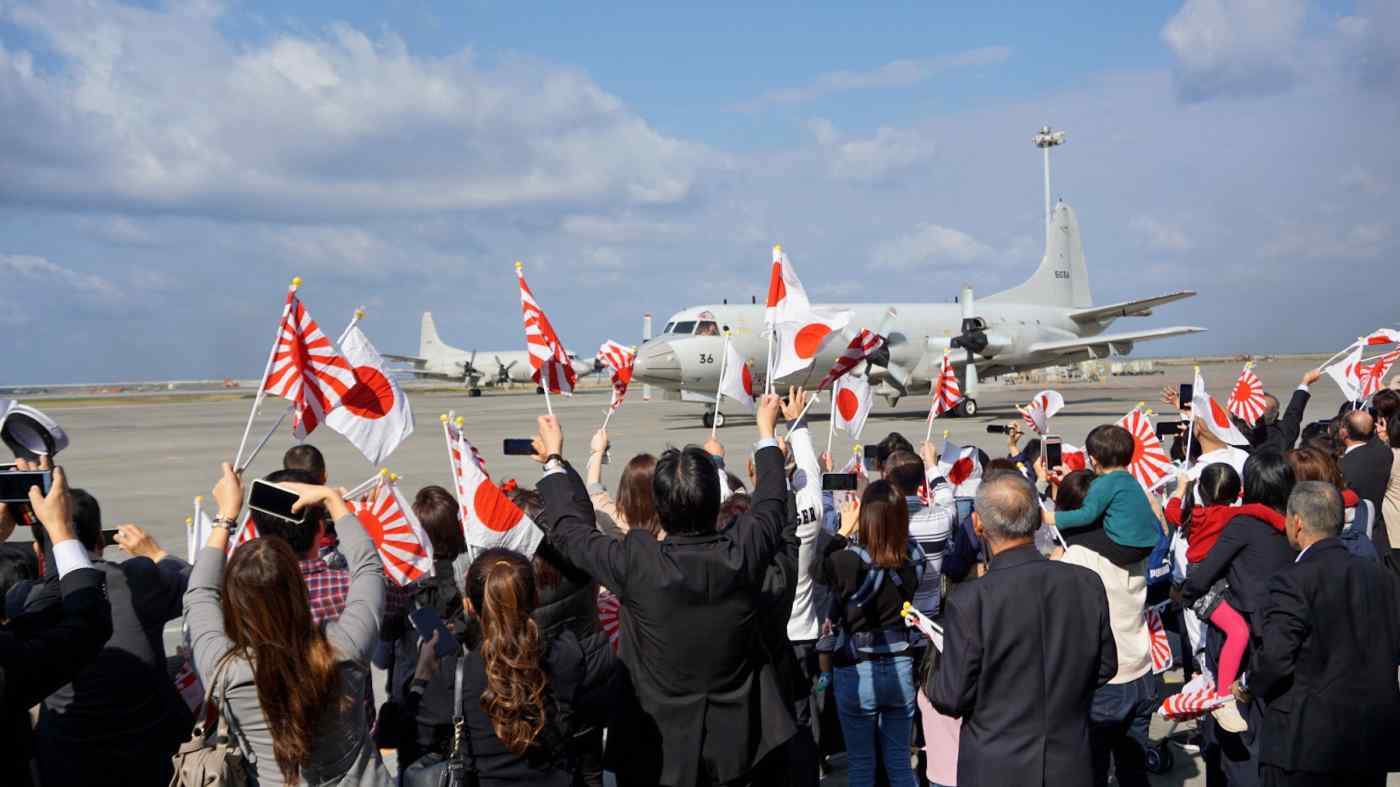 TOKYO -- Japan's Maritime Self-Defense Force dispatched two P-3C patrol aircraft to the Middle East Saturday, embarking on a mission to collect information to ensure the safety of vessels traveling to Japan through sea lanes near the Arabian Peninsula.

Sent off by family members, the P-3Cs left a MSDF base in Okinawa Prefecture. A helicopter-equipped destroyer will also make the voyage on Feb. 2.

While countries around the world reduce their reliance on Middle East oil, Japan still imports 90% of its crude from the region. Judging that it was indispensable to secure safe passage for the ships that carry oil to them, the Japanese government decided on the mission despite heightened U.S.-Iran tensions.

"There has been no negative response whatsoever from relevant countries toward Japan's efforts," Defense Minister Taro Kono said at the Naha, Okinawa base. "We can send them off with confidence."

He also stated that the mission's activities will be recorded in a daily report. The areas of activity will be limited to the Gulf of Oman, the northern Arabian Sea and the Gulf of Aden east of the Bab al-Mandab Strait, near the Red Sea. The Strait of Hormuz facing Iran and the Persian Gulf have been excluded, but risks of being caught up in unexpected situations persist.

The Cabinet approved the mission on Dec. 27, after Prime Minister Shinzo Abe explained the dispatch to Iranian President Hassan Rouhani who had visited Japan days earlier. Abe emphasized that it was a separate activity from the U.S.-led maritime security initiative to protect shipping near the Strait of Hormuz.

But in the new year, tensions rose to new highs as a U.S. military drone killed Iran's top commander Maj. Gen. Qassem Soleimani and Iran retaliated by attacking a U.S. military bases in Iraq. While things have calmed down after U.S. President Donald Trump expressed his desire to avoid a military conflict on Wednesday, "there is definitely a possibility that tension will increase again in the future," Kazuto Suzuki, a professor at Hokkaido University said. "In such a case, it is meaningful for the SDF to be operating in proximity to the action and to obtain detailed information."

The patrol planes will begin work from Jan. 20. The mission will monitor the movements of ships in the region by visuals and by radar, and will reach out by radio communication if suspicious.

An SDF outpost in East Africa's Djibouti will serve as a home base. The cruising range of the P-3C is about 6,700 km.

The destroyer Takanami will leave Yokosuka Naval Base on Feb. 2 and will begin operations in the Middle East later that month.

The mission this time will be "research and study" as stipulated by the Ministry of Defense Establishment Law, but if a Japanese citizen or a Japan-related vessel carrying Japanese cargo is attacked, the operations will be switched to "Maritime Security Action" under the Self-Defense Forces Law, allowing more measures for protection. The use of weapons will be limited to the protection of Japanese ships.