Markets hold breath for Tehran's response after US strike on Soleimani 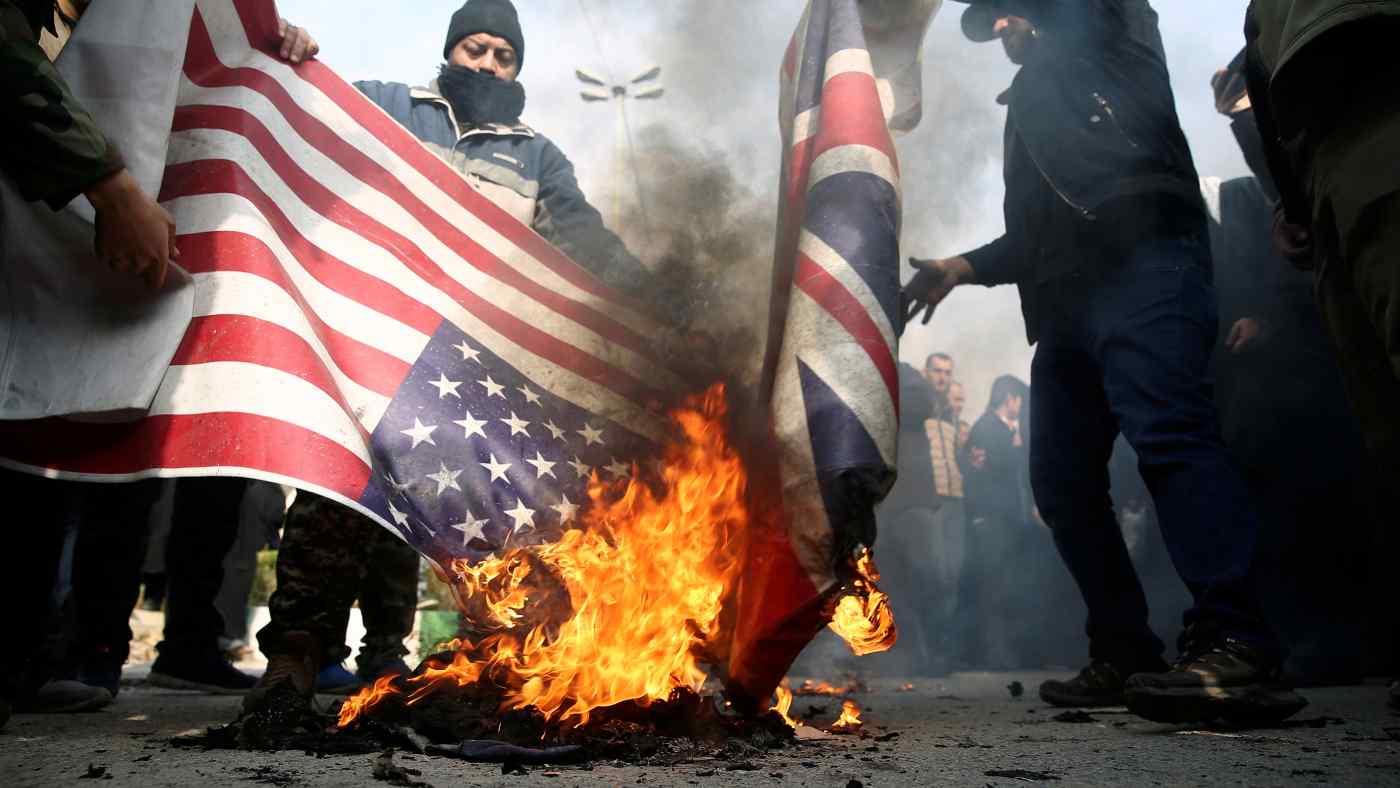 Demonstrators burn the U.S. and British flags during a protest against the assassination of the Iranian Gen. Qassem Soleimani by the U.S., in Tehran on Jan. 3.   © WANA/Reuters
TAKESHI KUMON and RYO NAKAMURA, Nikkei staff writerJanuary 4, 2020 02:14 JST | Middle East
CopyCopied

TOKYO/WASHINGTON -- Oil prices surged and the yen climbed on Friday as markets reacted to the death of Iran's top general in a U.S. airstrike, with the risk of greater Middle East tensions hanging over Asia's energy supply.

Benchmark Brent crude rose as much as 5% to $69.50 a barrel, the highest since September and close to the psychologically important $70 mark. The yen briefly strengthened to the 107 range against the dollar, touching a two-month high. Hong Kong's Hang Seng index and India's Sensex both slipped Friday, while the Dow Jones Industrial Average fell by over 200 points in early trading.

The killing of Qassem Soleimani, the commander of the Iranian Revolutionary Guard Corps' Quds Force, at Baghdad airport in Iraq underscores the shift by U.S. President Donald Trump's administration toward a more hard-line stance on Iran.

"There could have been no greater blow than this to Iran's leadership," said Hisae Nakanishi, dean of the Graduate School of Global Studies at Kyoto's Doshisha University. "It is hard to imagine that Iran's Revolutionary Guards will take this quietly."

A U.S. Department of Defense statement called the strike on Soleimani a "defensive action" that "was aimed at deterring future Iranian attack plans."

Soleimani "had orchestrated attacks on coalition bases in Iraq over the last several months" and "approved the attacks on the U.S. Embassy in Baghdad that took place this week," the Pentagon statement said.

Soleimani led the Quds Force, an elite unit of the Revolutionary Guards, which answers directly to Iran's supreme leader. The U.S. had accused him of playing a central role in expanding Iranian influence in the Middle East. A charismatic figure who was a national hero in Iran, he had been a target of U.S. sanctions.

His killing marks the clearest indication yet that the Trump administration has toughened its stance on Tehran. Last June, Trump stopped short of ordering an airstrike on Iran following the downing of an American military drone. The U.S. also held off on military action in response to an attack on ally Saudi Arabia's oil infrastructure in September, which Washington accused Iran of abetting.

The focus turns to Iran's next move. Kazuo Takahashi, a professor emeritus at the Open University of Japan, said Tehran has vowed retribution in the past, only to take no action in some cases.

"Iran knows full well that President Trump doesn't want a war," Takahashi said. "I think there will be skirmishes in the tense relationship between the two countries until the U.S. presidential election in November."

Japan recently approved a deployment of Self-Defense Forces personnel to the Middle East for maritime survey operations, a decision that follows attacks on oil tankers in the Strait of Hormuz, a vital sea lane for the country's energy supply. Tokyo declined to take a role in the U.S.-led coalition to patrol those waters amid an ongoing domestic debate over the SDF's status under Japan's pacifist constitution.

Nakanishi, the Doshisha University professor, said that if the U.S. Navy expands its activity in the Persian Gulf, there may be an impact on ally Japan's operations.