Protests pile pressure on Iran after admission of plane strike 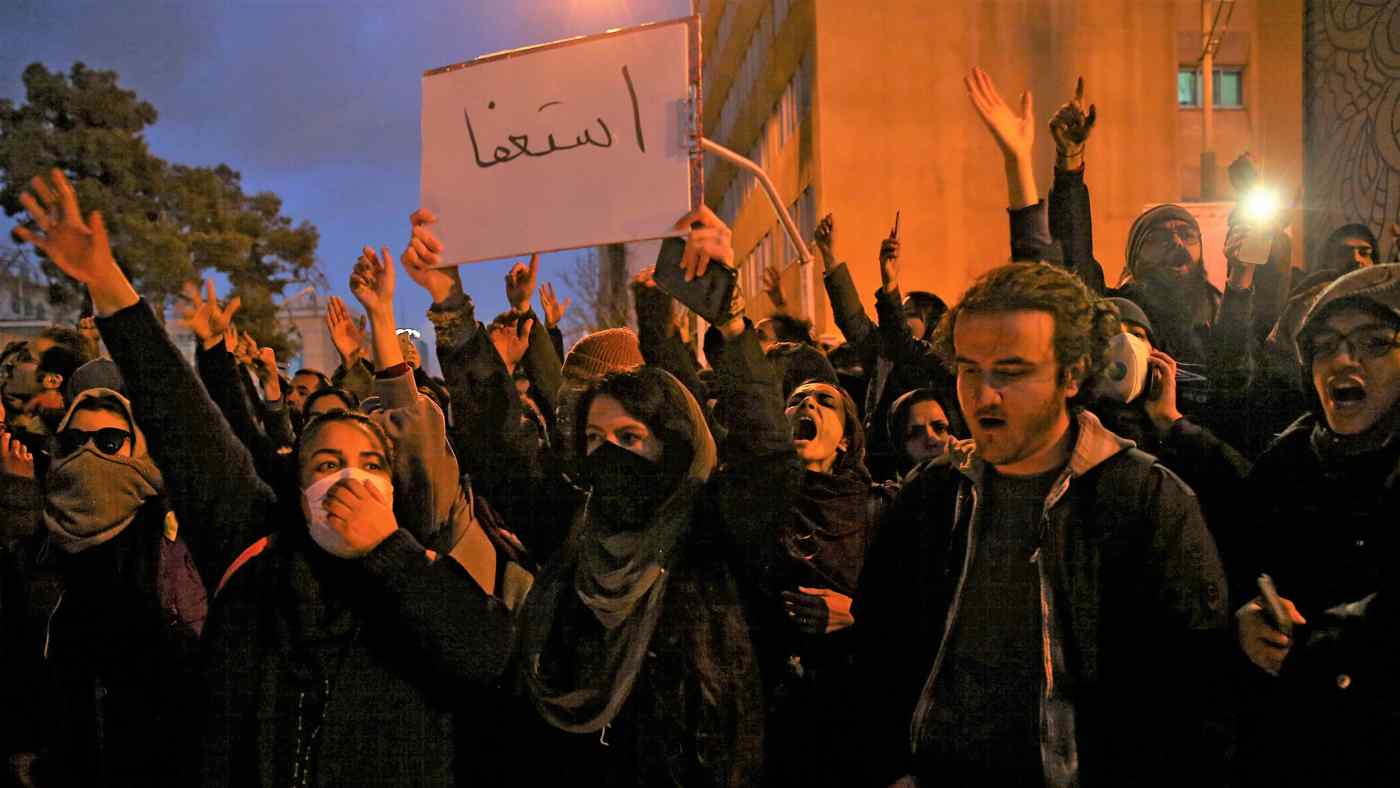 DUBAI (Reuters) -- Protests erupted across Iran for a second day on Sunday, piling pressure on the leadership after the military admitted it had mistakenly shot down a Ukrainian airliner at a time when Tehran had feared U.S. air strikes.

"They are lying that our enemy is America, our enemy is right here," a group of protesters outside a university in Tehran chanted, according to video clips posted on Twitter.

Posts showed other demonstrators outside a second university and a group of protesters marching to Tehran's Azadi (Freedom) Square. The videos also showed protests in other cities.

Some state-affiliated media carried reports of the university protests, after Saturday's demonstrations sparked by Iran's announcement that its military had mistakenly brought down the Ukrainian plane on Wednesday, killing all 176 aboard.

Tehran residents told Reuters police were out in force in the capital on Sunday, as public anger boiled up following days of denials by the military that it was to blame, issued even as Canada and the United States said a missile had brought the plane down.

Riot police fired teargas at thousands of protesters in the capital on Saturday, where many had chanted "Death to the dictator", directing their anger at the Islamic Republic's Supreme Leader Ayatollah Ali Khamenei.

"Apologise and resign," Iran's moderate Etemad daily wrote in a banner headline on Sunday, saying the "people's demand" was for those responsible for mishandling the plane crisis to quit.

The latest upsurge in anger adds to challenges facing the authorities, which launched a bloody crackdown in November to quell protests. The leadership is also struggling to keep the crippled economy afloat under stringent U.S. sanctions.

U.S. President Donald Trump tweeted: "To the leaders of Iran - DO NOT KILL YOUR PROTESTERS. Thousands have already been killed or imprisoned by you, and the World is watching."

The Ukraine International Airlines plane was shot down minutes after taking off from Tehran on Wednesday, when Iranian forces were on alert for U.S. reprisals following tit-for-tat strikes. Many on board were Iranians with dual citizenship, while 57 were holders of Canadian passports.

Iran's president said it was a "disastrous mistake" and apologised. But a top Revolutionary Guards commander added to public fury when he said he had told the authorities on the same day as the crash that an Iranian missile had struck the plane.

The Guards' top commander, Hossein Salami, said "we are more upset than anyone over the incident", state media reported. Another commander said Iran did not intend to conceal the cause.

But others said Iran's enemies, a term usually used to refer to Washington and its allies, were exploiting the incident.

Britain said its ambassador in Iran was briefly detained on Saturday, which Iranian media said was because he was inciting protests. The envoy said he attended a vigil for plane victims.

Iran summoned him on Sunday, while state-affiliated media said members of the hardline Basij militia gathered outside the mission with signs demanding the "treacherous embassy" be shut.

British Foreign Secretary Dominic Raab condemned the arrest and said Iran "can continue its march towards pariah status ... or take steps to de-escalate tensions" with diplomacy.

Protests inside Iran followed a build-up of tension between Iran and the United States, which withdrew from Tehran's nuclear pact with world powers in 2018 and then toughened up sanctions.

On Jan. 3, a U.S. drone strike in Iraq killed prominent Iranian commander Qassem Soleimani, responsible for building up Iran's network of regional proxy armies in Iraq and beyond. Tehran responded with missile strikes on U.S. targets in Iraq.

No U.S. soldiers were killed, but in the tense hours after that, the Ukrainian Boeing 737 was cleared to take off from Tehran airport and brought down by a missile fired by mistake.

"It is not a human error. This is a crime against humanity," the son of the toppled shah of Iran, Reza Pahlavi, wrote on Twitter. "Khamenei and his regime should go."

In the November protests, demonstrators had chanted slogans supporting him. His father died in exile in 1980.

Rallying to the establishment, Iranian lawmakers praised the elite force's commanders for courage in admitting the error, according to Fars, a news agency seen as close to the Guards, a parallel military set up to protect the theocratic system.

Iranian officials sought to portray the plane disaster as a second blow to a mourning nation after Soleimani's death in a U.S. drone strike.

The commander's funeral had prompted huge public gatherings, which the authorities described as a show of national unity. But the displays of emotion have been swiftly overshadowed and protesters on Saturday tore up pictures of the slain general.