JAKARTA -- "Welcome back, the famous Great Imam, the pride of the habibs

"Whose knowledge is as deep as the ocean, who is patient and generous"

So reads an Arabic poem posted on Front TV, a Youtube channel run by the Islamic Defenders Front, or FPI, which is led by Muhammad Rizieq Shihab, the firebrand cleric who has just returned from three and a half years of exile in Saudi Arabia.

Huge crowds greeted the preacher, better known as Habib Rizieq, when he landed back in the Indonesian capital of Jakarta on Nov. 10. Supporters have since thronged to his almost daily sermons, mostly held outside his central Jakarta home next to the FPI headquarters.

In a recent one-hour sermon, he skillfully combined Quranic verses, abrasive jokes and a heavy lecture about Islam and politics. The performance was interlaced with attacks on the administration of President Joko Widodo, and touched on the issues of economic inequality and the nation's controversial omnibus law.

Such subjects would be avoided in typical Quran classes or Islamic study groups in Indonesia -- home to the world's largest Muslim population and known for its moderate brand of Islam. But despite the heavy subject matter, hot weather and coronavirus concerns, thousands gathered outside Shihab's residence on the night of Nov. 14. Young and old, all male clad in white, responded enthusiastically to the cleric's fiery sermon with shouts of "Allahu akbar!"

"Ulemas (bodies of Muslim scholars) have been criminalized only because they disagree with the government. Does the government have morals or not?" Shihab roared before his audience. "If the government, the parliament don't want to repent, don't want to take part in our moral revolution, then it is time for the Muslim people to wage jihad to liberate Indonesia!"

It appears that Shihab was referring to the literal translation of jihad, or "meritorious struggle," because he later asserted that his new campaign for "moral revolution" doesn't involve the use of arms.

The topics of Shihab's sermons and the growing size of his congregations reflect the growing influence of the cleric and his FPI over Indonesia's political scene. This can be seen in the strong reactions of Widodo and the nation's political elite.

In what some observers see as an excessive reaction, Jokowi has fired two police chiefs over their inability to prevent the Shihab gatherings. The president cited coronavirus concerns, but some people say he himself has neglected epidemiologists' repeated warnings against premature economic re-openings and regional elections.

A health ministry official said Sunday that 80 attendees of the Shihab gatherings had tested positive for coronavirus. Shihab had previously declared a plan for a national tour, but the FPI last week announced that the plan has been cancelled, saying the cleric "chooses to rest for a while." The FPI denied rumors that Shihab and his family might have contracted the virus.

Meanwhile, the commander of the Indonesian Military (TNI) said it will not "let even a single enemy" threaten Indonesia's unity -- comments that came partly in response to Shihab's divisive remarks fueling social frictions. The cleric has accused the TNI of favoring wealthy Chinese-Indonesians over Muslim clerics, and has labeled those who disagree with his circle as communist sympathizers. People gather for the homecoming of Rizieq Shihab in Jakarta on Nov. 10.   © Reuters

But other politicians have gone to greet Shihab in person.

Jakarta Gov. Anies Baswedan paid a visit the night after the preacher's return. Baswedan's win in the 2017 Jakarta governor's race is seen largely as stemming from rallies of hundreds of thousands of Muslims against his rival, the then Chinese-Indonesian Christian governor of Jakarta, Basuki Tjahaja "Ahok" Purnama, over alleged blasphemy. Shihab played an instrumental role in mobilizing the crowds.

Baswedan, who defied Jokowi in September by reinstating mobility restrictions in Jakarta over coronavirus spikes, was grilled by police last week for allegedly allowing the Shihab gatherings to go on for days. The FPI later tweeted #AniesForPresidenRI2024, implying support for Baswedan in Indonesia's next presidential election to be held in 2024.

Controversy surrounded Shihab and the FPI even before they became so influential. Before the late 2016 rallies against Ahok, the group had been seen as mere vigilantes known mostly for raids against nightclubs during the fasting month of Ramadan. The FPI's sympathizers point to its charity work in disaster-stricken areas.

The FPI was co-founded by Shihab and a few other clerics just a few months after the fall of Suharto in May 1998, a moment that ended his 32 years of autocratic rule and gave birth to Indonesia's democracy. This allowed previously oppressed Islamic organizations to flourish. Some books and reporters point to links between the FPI and senior military and police officials in this period -- claims denied by the Islamic group. 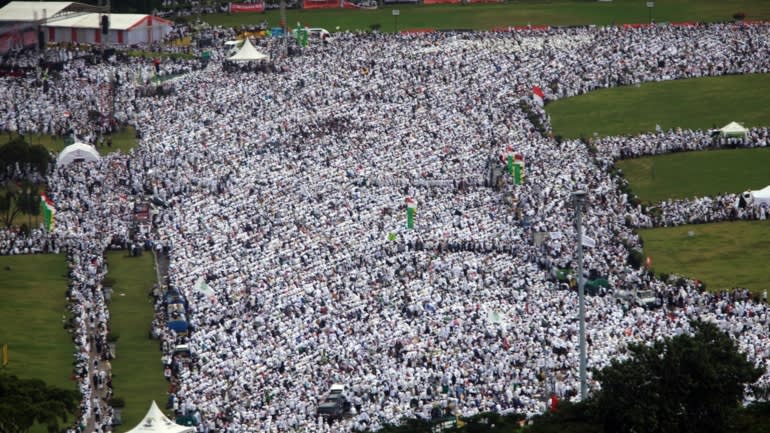 Indonesian Muslims gather during a rally against Basuki "Ahok" Tjahaja Purnama, a minority ethnic-Chinese and Christian who at the time was the governor of Jakarta, at the National Monument in Jakarta on Friday, Dec. 2, 2016.   © AP

Shihab, 55, was born to Arab-Indonesian parents in Jakarta, and his followers call him a "great imam" and believe him to be a descendant of the Prophet Muhammad. Among some Muslim communities, the honorific title before his name, "habib" -- literally meaning the beloved -- is commonly attached to descendants of the Prophet. He is married with six daughters and a son.

Shihab studied Arabic at the Saudi-funded Islamic and Arabic Sciences Institute in Jakarta, and won a scholarship to study at King Saud University in Riyadh, majoring in Islamic studies. He later did a master's degree at Malaysia's Universiti Malaya, completing a thesis in 2012 titled "The Influence of Pancasila on Shariah Law Implementation."

The title sums up his Islamist views that have only emerged in recent years, and have now become the main topics of his sermons. Challenging secularists' views, Shihab insists that compliance to shariah law has a basis in Indonesia's constitution and five founding principles known as Pancasila. He highlighted the first principle, "Belief in One God," which echoes Islam's concept of monotheism.

"We'd like to remind the president, his ministers and their subordinates, that Indonesia is based on One God. So if you want to get rid of Islamic teachings from the governing of the state, then that means you are [disrespecting] the constitution!" he said on Nov. 14.

But Shihab also has distanced himself from transnational Islamist movements calling for the establishment of a caliphate, repeatedly asserting his nationalist stance and defense of the "Republic of Indonesia."

To Anandra, a 28-year-old resident of Bekasi in the Jakarta outskirts, it is Shihab's nationalist-Islamist vision that appeals to him. Anandra, who took part in the anti-Ahok rallies, is not an FPI member but he has been listening to Shihab's sermons on Youtube.

"I used to know the FPI only from media reports, that it often raided bars and nightclubs -- so I didn't like them because they sounded like thugs [trying to extort] money," Anandra told Nikkei Asia. "But especially after the Ahok case, I think Habib Rizieq is the staunchest defender of Islam, and he has extraordinary views."

Like many other supporters and sympathizers of the cleric, Anandra saw as politically driven the criminal charges against Shihab that had sent him into exile in Saudi Arabia.

Around the same time Ahok was jailed after being convicted of blasphemy, Shihab was charged with insulting the Pancasila and sexting, among other allegations, but the way for his return to Jakarta was paved after police recently cleared his name. Prior to this, he had served two short stints in prison in the 2000s for instigating hatred and a violent FPI rally.

Firman Noor of the Indonesian Institute of Sciences told Nikkei that Shibab's influence in national politics remains to be seen, saying that Jakarta and its satellite cities are the home base of the FPI, but other regions have rejected their presence.

Noor said conservatism is growing among Indonesia's Muslims, but has yet to translate into national politics -- Islamic parties remained a minority in parliament after legislative elections last year. "Combined, the Islamic parties only collected roughly 30% of the votes -- which has been more or less the average since the beginning of the reforms era."

Furthermore, Noor does not think Shihab would want to enter politics, saying his popularity comes from his status as a preacher.

"The most that he can do is play the role of an opinion leader," Noor said. "If the right moment arrives, the FPI can be a political machine -- but not dedicated to it. And if managed well, they can turn into a power that cannot be underestimated."

More concerning for many, however, is Shihab's blurred view on violence. He has repeatedly denounced Islamic State and terrorism, but recently condoned the attack in France over cartoons of Muhammad.

"To the government and especially the police, if you don't want similar incidents like the one in France -- where an insulter of the Prophet was beheaded -- then please process reports against religious blasphemers," Shihab said. "Otherwise, don't blame Muslims if tomorrow the insulter's head is found on the street."

Peter Mumford, practice head for Southeast and South Asia at Eurasia Group, thinks Shihab's return does not pose a significant threat to the Widodo administration, but "increases the risk of social unrest."

"If social divisions worsen and protests grow, the president will inevitability be distracted by these issues and devote less time to economic reform," Mumford said.