More than 23,000 stores in South Korea were participating in a boycott of Japanese goods as of July 16, according to an industry group official. (Photo by Kenichi Yamada)
KENICHI YAMADA and HIROKI OBAYASHI, Nikkei staff writersJuly 26, 2019 03:34 JST | Japan
CopyCopied

SEOUL/TOKYO -- With Japan and South Korea continuing to feud over Tokyo's controls on exports of chipmaking materials, Japanese companies are increasingly feeling the heat as boycotts by South Korean consumers pick up steam.

The campaign first took off among smaller businesses. Midsize convenience stores in Seoul prominently display stickers declaring that they do not stock Japanese alcohol.

More than 23,000 retail outlets were participating in the boycott as of July 16, according to remarks by a senior industry group official reported by local media.

E-mart, South Korea's top supermarket chain, has not joined in, but its sales of Japanese beer, sauces and condiments dropped 30% between July 1 and mid-month compared with the same period in June.

If South Koreans remain reluctant to buy Japanese beer, "we may be forced to scale back shipments," warned an executive at a brewer.

The boycott has also hit Fast Retailing, operator of the Uniqlo casualwear chain, which has more than 180 stores in South Korea. The company issued an apology this week after an outcry over Chief Financial Officer Takeshi Okazaki's comment at an earnings briefing that "we do not think the effects will continue for long."

Some companies have opted to keep a lower profile in this hostile environment. Sony canceled an event to announce a new wireless headphone model, while local media reported that Nissan Motor called off a test-drive event for the revamped Altima sedan released this month.

The impact is spreading to the services sector as well, particularly tourism. In its most recent week of data, travel agency JTB saw a 10% drop in reservations at Japanese hotels by South Korean customers from the previous week. Bookings of trips to Japan at a major South Korean travel company have plunged by more than 50% on the year this month.

"There haven't been many cancellations because of the fees, but it looks like [consumers] are steering clear of Japan," an industry insider said. 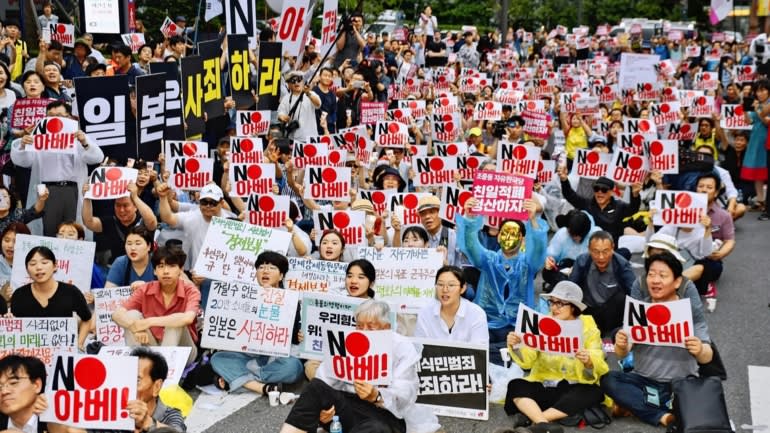 Protesters gather in front of the Japanese embassy in Seoul on July 20. Bookings of trips to Japan have plunged by more than 50% this month, according to a major South Korean travel agency.   © Kyodo

Reduced access to cheap flights is likely to imperil the Japanese government's plans for drawing 40 million tourists in 2020. About 7.54 million South Koreans visited Japan last year, making up about a quarter of the total and marking a 5.6% increase from 2017, data from the Japan National Tourism Organization shows.

It is difficult to say how long the shunning of all things Japan might go on. A similar campaign in 2013 set off by Japanese celebration of "Takeshima Day" -- highlighting Japan's claims to islets that South Korea also claims and calls Dokdo -- did not last long. But the outlook for this boycott may become murkier should Tokyo escalate the clash by taking Seoul off a whitelist of trusted trading partners next month.

If the boycott inflames public anger in both countries, "both South Korean and Japanese companies will ultimately suffer," said Eom Chi-sung, an official at the Federation of Korean Industries.

"A calm response is needed to make sure political problems don't affect the economy," Eom said.