The northern island of Hokkaido and the southern island of Kyushu are both popular destinations for South Korean tourists. In both places they make up a significant portion of overseas visitors and contribute to consumer spending.

Nearly 3 million foreign tourists visited Hokkaido in fiscal 2018, up 300% from a decade ago. Those overseas visitors account for 26% of total tourist spending, according to the Hokkaido prefectural government. Now much of that is at risk.

Data from an NTT subsidiary and JCB shed some light on business trends related to foreign tourists in Hokkaido.

The city of Noboribetsu, well known all over Japan for its hot spring resorts, is one of the most popular tourist destinations on the island. Many of the overseas tourists who travel there are from South Korea, where hot springs are rare compared to Japan. “Noboribetsu is well known in South Korea too,” said a 20-year-old South Korean student studying in Sapporo. Her family flew from South Korea to join her for a 7-day trip that included stops in Sapporo, Hakodate, Furano and Lake Toya. “We had a lot of fun at a beer garden in Sapporo,” she said.

Court rulings in South Korea over wartime labor compensation and tighter export controls from Japan have strained relations between the two countries. Protests and boycotts of Japanese products have taken off in South Korea as the feud has continued.

“We were worried, but no one around us was opposed to us coming,” said the student’s parents. “This isn’t related to regular people. We want to be friends with Japanese people.”

A South Korean visitor at Noboribetsu Date Jidaimura, a nearby Edo period theme park, voiced similar sentiments. “Some people I know have canceled trips, or worried about it, but we haven’t had any problems during our trip,” said a man in his early 40s. “This is a political problem, and ordinary people aren’t paying attention. I don’t think it’ll get worse, and things should calm down.”

But the numbers tell a different story. The theme park, where guests can dress as a ninja or walk around in a kimono, is popular among South Korean tourists. In 2018, about half of the park’s 330,000 visitors were from South Korea.

“The number of reservations is down by about half from last year,” said Keiji Yamada, who oversees shows at the park. The park has been trying to attract more tourists from other countries. It advertises in five languages on social media.

But Hokkaido’s marketing efforts cannot completely make up for the decline in South Korean visitors. In the nine months through December 2018, 2.02 million overseas tourists came to Hokkaido. Some 505,200 of them, or 25%, were from South Korea, making it  the top source of inbound tourists to the prefecture. 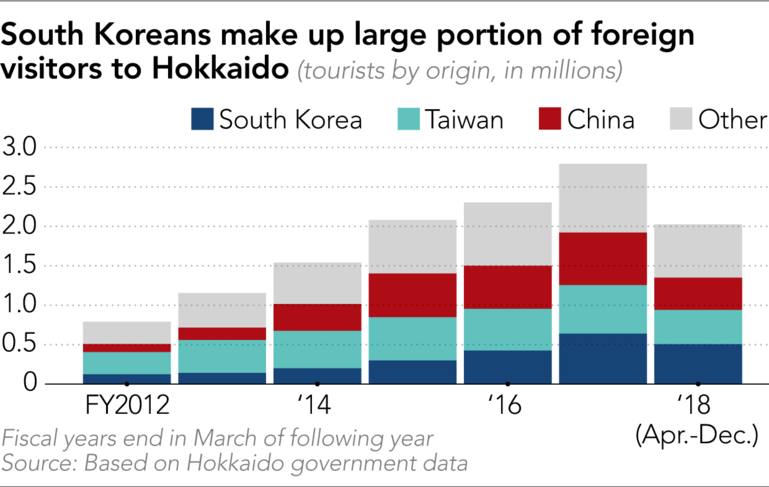 The drop-off is also affecting restaurants in Hokkaido, a region famous for its seafood. “We’re worried,” said the manager at a crab restaurant in Sapporo. “South Koreans make up a large share of our customers.”

Airlines are cutting flights as well. Korean Air will suspend flights between Busan and Sapporo in September, and low-cost carrier Easter Jet will suspend the same route.

Asiana Airlines has seen reservations for its flights from Seoul to Sapporo drop by 30% in August. “We’re hoping to attract more Japanese customers instead, but the difference in the number of South Korean and Japanese customers is huge,” said an Asiana official.

Hotels are feeling the pinch too. Tsuruga Holdings, which operates hotels in Hokkaido, has seen reservations by South Koreans at its facilities around Lake Shikotsu drop by about 25%.

Local governments are trying to fight back. The prefectural government and the city of Asahikawa will try to create a welcoming atmosphere at airports by handing out sweets made in Hokkaido and putting up welcome banners.

“We were all supposed to come together,” said a 20-year-old man from South Korea who was visiting the city of Fukuoka with two of his friends. One more person was supposed to join, but he canceled a week before the trip. “There’s a strong feeling against going to Japan in South Korea now. I guess his family was against it.”

A high-speed ferry between Busan and Fukuoka saw its South Korean passenger numbers drop 20% in July from the previous year. JR Kyushu Jet Ferry, which operates the ship, expects that figure to fall further in August.

Hotel cancellations are rising here too. In Okinawa, another South Korean favorite, reservations for South Korean guests at Novotel Okinawa Naha for October are down 90% from last year. Group tours typically pick up in autumn, so the cancellations are “extremely painful,” according to manager Kimiharu Sakamoto. As of Aug. 13, Naha-based Okinawa Tourist Service said its group tour orders are down 80% from the previous year, and its September orders are down 90%.

The impact is spreading to other businesses too. Cancellations at popular hot springs in Saga Prefecture have started piling up. “Since early July, group tours from South Korea have been canceling,” said Hidetoshi Tanaka, an official in the tourism section of the prefectural government. “We’re in a situation where it’s hard to advertise, so we won’t see many new reservations either.”

For both Hokkaido and Kyushu, the economic impact of the frayed ties between Tokyo and Seoul is just starting to become clear. Tourism-related sectors in the two regions will continue to suffer as long as the tension between the two countries continues.