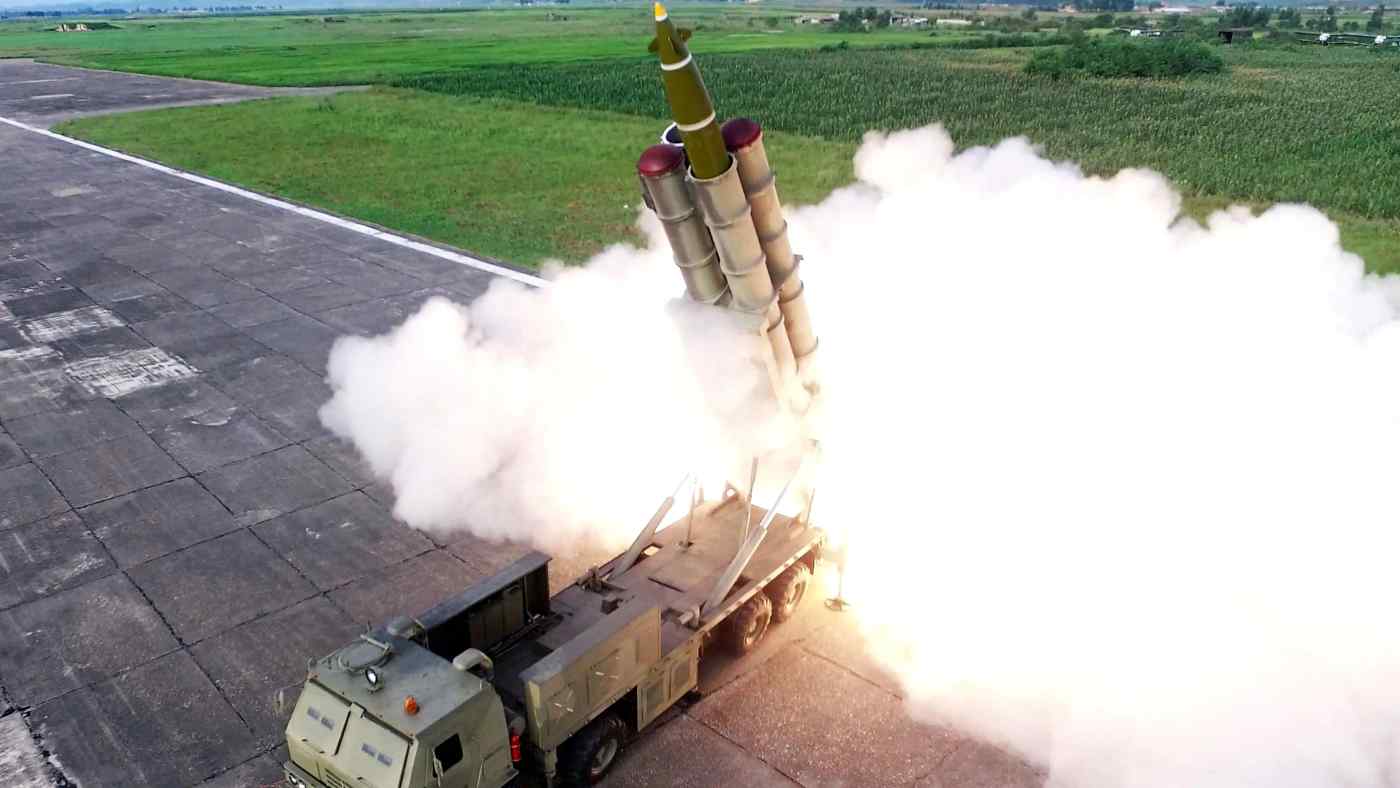 Recent repeated missile tests, such as this firing of a multiple rocket launcher seen in a photo from Pyongyang's Korean Central News Agency, is one reason that the U.S. and Japanese sides have urged South Korea to extend the intelligence-sharing agreement.   © Reuters
RIEKO MIKI and YOSUKE ONCHI, Nikkei staff writersNovember 18, 2019 06:21 JST | Japan
CopyCopied

BANGKOK -- South Korea and Japan are working to save a key intelligence-sharing pact critical to the region's stability set to expire Saturday, but the two sides are struggling to make progress as they disagree on whether their trade spat should factor into the discussions.

With less than a week to go before the pact expires, Japanese Defense Minister Taro Kono, South Korean Defense Minister Jeong Kyeong-doo and U.S. Defense Secretary Mark Esper met for over an hour in Bangkok on Sunday in an attempt to find a resolution.

Esper urged Japan and South Korea to save the General Sharing of Military Information Agreement, which allows the countries to directly exchange sensitive intelligence without going through the U.S. Trilateral cooperation is critical to countering the threat posed by North Korea and China, he said.

Kono also pointed to North Korea's repeated missile tests, and pushed South Korea to maintain the trilateral security partnership. But little progress was made at the meeting, Japanese sources said.

South Korea first said in late August it will scrap the agreement, known as GSOMIA, in response to export controls on key chipmaking materials announced by Japan in July. Seoul officially wants Tokyo to take back the restrictions in exchange for saving the intelligence pact. Japan, meanwhile, sees them as two separate issues and has refused. Despite diplomatic tensions, many in South Korea's defense and foreign ministries support extending GSOMIA to safeguard the alliance with the U.S. "North Korea, China and Russia will be happy if the deal dies," Jeong has said.

South Korean President Moon Jae-in sees the situation differently. At a Friday meeting with Esper, he said it would be difficult to share military intelligence with Japan in light of its export restrictions.

Moon faces a general election in April. He risks alienating his progressive support base if he bows to U.S. and Japanese pressure by extending GSOMIA.

But scrapping the deal would also hurt Moon's administration. South Korea risks hurting its alliance with the U.S. and its standing on the global stage if it refuses to heed repeated warnings by Washington.

Though South Korea made its choice on GSOMIA on its own, it now has no choice but to rely on the U.S. to bridge its ever-growing rift with Japan. Seoul asked Tokyo several times to provide a plausible justification for the extension of GSOMIA, but Tokyo has demurred, a South Korean source said.

South Korea is believed to be weighing several compromises at the moment, such as extending the deal but limiting exchanges until Japan withdraws trade restrictions, or updating a trilateral intelligence-sharing framework from 2014. It is unclear whether Washington will accept these options.

South Korean Foreign Minister Kang Kyung-wha will be visiting Japan from Friday to attend a Group of 20 meeting in Nagoya, where she could meet with Japanese counterpart Toshimitsu Motegi. The two sides are expected to continue searching for a resolution up to the Saturday deadline.

In the meantime, Japan recently greenlighted the first shipment of liquid hydrogen fluoride to South Korea since it began requiring case-by-case approval, South Korean media reported. The chemical will be exported by Japan's Stella Chemifa to chipmakers Samsung Electronics and SK Hynix.

Liquid hydrogen fluoride is a critical material in the chipmaking process. The Japanese government had previously approved shipments of other chemicals under restriction, including resist, fluorinated polyimide and hydrogen fluoride gas.