TOKYO/SEOUL -- The Japanese government on Thursday approved its first export of chipmaking materials to South Korea under new export curbs but has failed to clarify what to expect from future screening, leaving exporters facing uncertainty along with more paperwork.

The greenlighted export of resist, used in semiconductor manufacturing, is believed to come from Shin-Etsu Chemical. It is being sent to Samsung Electronics for use in processor production for outside customers.

The public announcement of an approved export was a departure from normal practice. Minister of Economy, Trade and Industry Hiroshige Seko said it was in response to Seoul's accusation that Tokyo was imposing an export ban.

"This shows that we will not apply [the controls] arbitrarily to legitimate trade, but will give approvals based on stringent screening," he said.

The ministry stressed that it will grant licenses for exports when proper procedures are followed. But exporters still face a tangle of red tape that could proliferate once Japan removes South Korea from its list of trusted trade partners late this month.

Seko asserted that "nothing has changed" regarding the weak South Korean trade oversight that Tokyo cited as its reason for the curbs -- and warned that more such measures are on the table if additional "inappropriate" exports emerge. These could include requiring individual approvals for shipments of other materials. 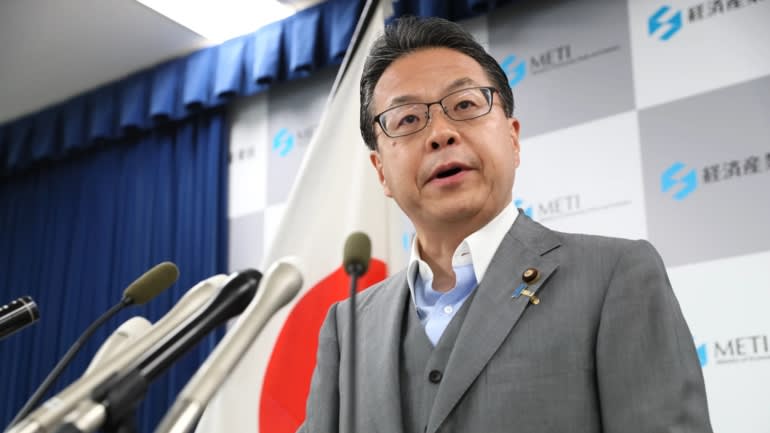 "We will continue strict screening" to prevent products from being diverted elsewhere or used for anything beyond their intended applications, he said.

The controls, announced July 1, started with tighter restrictions on exports of hydrogen fluoride, resist and fluorinated polyimides. The license announced Thursday is the first to be issued under these provisions.

The next step, slated for Aug. 28, will recategorize South Korea from Group A -- the highest status -- to Group B in Japan's export controls. This will let Tokyo demand reviews of any shipment to South Korea deemed to pose a security risk.

While South Korea will remain above Group C economies like China and Taiwan, it will actually face tougher restrictions in some cases. Exporters can get bulk licenses for shipments of resist and fluorinated polyimides to Group C markets, but this will not be an option for South Korea.

There are companies considering working around the curbs.

Morita Chemical Industries will begin producing ultrapure hydrogen fluoride in China via a joint venture this year, with an eye toward supplying it to Chinese chipmakers and Samsung fabrication facilities in the country. It will also ship the gas to South Korea if demand warrants.

Morita currently makes hydrofluoric acid in China and purifies it in Japan. While its China production plans predate the Japan-South Korea row by two years or so, handling the entire process there broadens the company's supply options.

"If similar problems come up between Japan and South Korea in the future, we can ship to South Korea from China instead of Japan," CEO Yasuo Morita said.

In a meeting Thursday of South Korea's National Economic Advisory Council, President Moon Jae-in said "uncertainty still remains" and stressed the need for measures to mitigate the impact of Japanese curbs on the South Korean economy.

But he also framed it as a chance for the country to depend less on its neighbor. "We will turn this situation into an opportunity to change the nature of the South Korean economy and leap forward anew," he said.

Questions remain about supplies of hydrogen fluoride and fluorinated polyimides, of which Tokyo has yet to approve any shipments.

But "it's difficult to predict the outlook three to four months later," Koh said.

Also on Thursday, Seoul announced ramped-up screening of Japanese coal ash, used in cement production. All shipments will be tested for radioactivity, in a change from the previous policy of quarterly checks.

South Korea's Environment Ministry cited safety concerns among the public and said the move had nothing to do with the trade row. But Seoul had suggested after the whitelist decision that it could step up safety measures related to suspected contamination after the 2011 meltdowns at the Fukushima Daiichi nuclear plant.