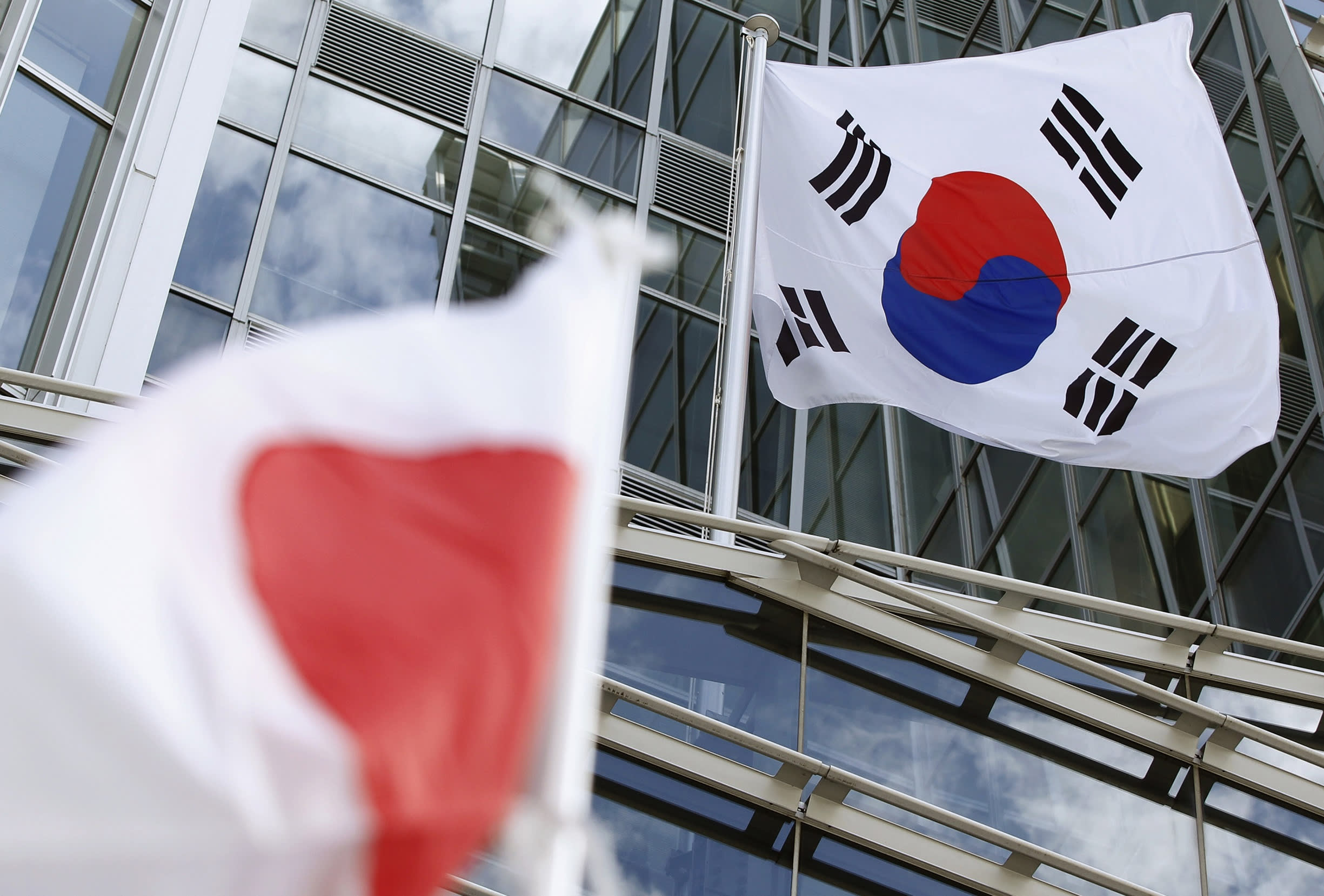 Japan could decide as early as Friday to drop South Korea from a "white list" of countries that enjoy minimum trade restrictions.   © Reuters

WASHINGTON -- Secretary of State Mike Pompeo later this week will encourage the U.S.'s two major Asian allies "to find a path forward" from a diplomatic row that is threatening the global semiconductor supply chain, he said on a flight to Bangkok.

Pompeo, Japanese Foreign Minister Taro Kono and South Korean Foreign Minister Kang Kyung-wha will likely hold a trilateral meeting on Friday in the Thai capital on the sidelines of the ASEAN Regional Forum on security.

During the meeting, Pompeo is expected to explore a way to prevent Japan-South Korea relations from further worsening.

"They're both great partners of ours," Pompeo told reporters on the flight. "They're both working closely with us on our effort to denuclearize North Korea. So if we can help them find a good place for each of the two countries we'll certainly find that important for the United States."

Meanwhile, Reuters reported on Tuesday that the U.S. has proposed Japan and South Korea sign an agreement to refrain from any new countermeasures for a certain period of time, citing a senior administration official.

Regarding the no new countermeasures proposal, the senior U.S. administration official said the purpose would be to allow Japan and South Korea time for discussions.

The official said no expiration date would be set and that such a "cease fire" agreement would not fundamentally resolve pending issues between Japan and South Korea.

Regarding Pompeo's willingness to mediate between Tokyo and Seoul, Suga told reporters that Prime Minister Shinzo Abe's the government will try to obtain U.S. understanding of Japan's stance.

The reported U.S. proposal comes with Tokyo preparing to remove South Korea from its so-called "whitelist" of countries that are subject to minimum trade restrictions. The move could come during a cabinet meeting on Friday, but Washington's reported proposal is believed to be aimed at persuading Tokyo to back off.

The whitelist consists of countries Japan trusts in terms of export controls.

The U.S. government was initially wary about getting involved in the long-running rift between Japan and South Korea. But a U.S. State Department official on Friday expressed concerns over aggravating Japan-South Korea relations.

U.S. President Donald Trump on July 19 revealed that he was asked by South Korean President Moon Jae-in to step in to ease tensions. Trump also said he would consider serving as a mediator if Japan makes such a request.

Suga, meanwhile, said it is advisable that Tokyo and Seoul renew the General Security of Military Information Agreement, due to expire in August. "It is important for the two countries to join hands when needed," he said. Tokyo "will continue to handle the matter appropriately."