Samsung and Japan suppliers steadfast in keeping ties, for now 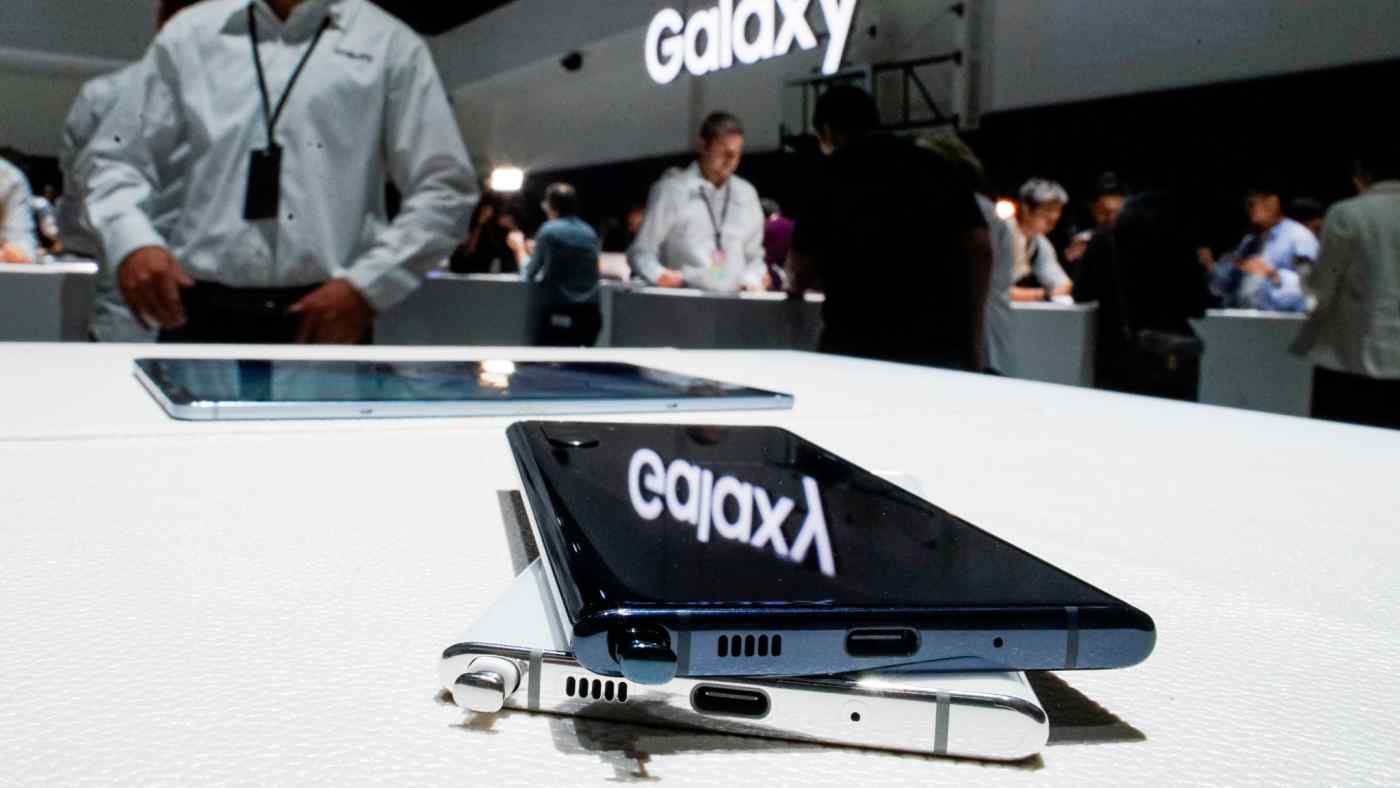 Samsung -- a world leader in the development of state-of-the-art semiconductors -- is dependent on Japanese-made materials, and Japanese companies have no good reason to drop their valued customer. That said, uncertainties remain over the future of the so-called Japan-South Korea semiconductor coalition, as political conflicts highlight Samsung's dependency on Japan.

The Japanese government on July 1 announced that it will tighten controls on exports to South Korea of materials required to produce semiconductors and displays. The same day, salespeople from the makers of those materials as well as other suppliers were flooded with inquiries from Samsung's procurement department.

The South Korean tech giant wanted to know if Japan would actually ban exports and what the Japanese government is really thinking.

"We are very much interested in what the Abe government will do next," said a senior official at Samsung who asked not to be named. "We also wonder what the recent cabinet shuffle means, and its impacts on economic policy."

Japanese manufacturers -- which had been briefed in advance by the Ministry of Economy, Trade and Industry -- told Samsung that the ministry will issue permits as long as papers are ready, and that they will not make Samsung suspend operations at its plants.

Nevertheless, Samsung sent the head office's procurement team to Japan to visit each supplier and check on production volume and inventories.

Samsung heavily relies on Japanese makers in procuring materials used to fabricate chips. Of its top 100 suppliers, 23 companies are from Japan, second only to South Korea's 39 companies.

The 23 companies include material makers such as Sumitomo Chemical, SUMCO and Taiyo Nippon Sanso, as well as manufacturing equipment makers such as Tokyo Electron, Canon and Ulvac. "Samsung is well aware of the risk of changing suppliers," said an executive of a Japanese supplier of chemicals used to make chips. Producing semiconductors takes two to three months and involves thousands of steps. Also, the same materials have subtle "properties" that differ for each manufacturer. Changing suppliers could result in lower yield rates.

Japanese companies are also major suppliers of core materials for displays and batteries.

"It will not be easy for Samsung to switch materials," said Yutaka Shibata, vice-presidential executive officer of Japanese chemical maker Asahi Kasei.

"We continue to cooperate with our suppliers and make efforts to minimize problems in production," a Samsung Electronics spokesperson told Nikkei on Friday. Japanese suppliers of semiconductor materials insisted that Samsung leaders remain committed to sourcing materials from Japan.

Even when President Moon Jae-in called top executives of South Korean conglomerates together for a hastily arranged meeting on July 10, Samsung Electronics Vice Chairman Lee Jae-yong went ahead with his business trips to Japan. He met leaders of equipment and materials makers to call for cooperation between Japanese and South Korean companies, even amid political conflicts.

Samsung has overtaken Japanese electronics makers in areas such as TVs, mobile phones, semiconductors and displays. The South Korean giant has strictly adopted a management policy to "Learn from Japan" in its efforts to grow.

Founder Lee Byung-chul, his son Lee Kun-Hee and grandson Lee Jae-yong all studied in Japan. The three "snapped up contracts with Japanese companies," said a former executive of a Japanese electronics maker.

Samsung shifted from sugar manufacturing to electronics after it set up a black-and-white TV joint venture with Japan's Sanyo Electric in 1969. It has since grown into a behemoth by collaborating with Japanese makers including NEC, Toshiba, Toray Industries, Sony and Sumitomo Chemical. In fact, the South Korean company expresses its gratitude to Sanyo at the Samsung Innovation Museum at its head office in Suwon, south of Seoul.

Samsung has absorbed technologies from other companies because "it is difficult for South Korean companies -- which tend to seek short-term results -- to conduct basic research in the long term," said a Japanese engineer who works at Samsung. It is also cheaper for Samsung, which has boosted its procurement capacity, to buy materials than to develop them on its own.

Japanese suppliers also have compelling reasons to put Samsung first. As Japanese electronics makers either halted or shrunk operations, Samsung saw that as an opportunity to grow into the world's biggest device maker, currently generating 8 trillion yen ($74 billion) in sales from semiconductors and 3 trillion yen from displays.

"As a result, Samsung has become the biggest client for Japanese suppliers," said an official of a Japanese manufacturing equipment maker.

Samsung depends on outside sources for advanced parts and materials, while Japanese suppliers do not want to lose their biggest customer. So the interdependence between Samsung and Japanese suppliers remains strong, at least for now.

But the Japanese government's tougher export controls have drawn a sharp reaction from the South Korean government and the public, who have criticized the move as "economic retaliation."

The dispute has resulted in the strong perception that the heavy reliance on Japan for advanced parts and materials is a risk to South Korea. For its part, Samsung has no choice but to explore procurement from alternative suppliers.

But there has been no progress toward improving strained relations between the two countries. South Korea recently decided to withdraw from the bilateral General Security of Military Information Agreement, or GSOMIA, an intelligence-sharing deal.

Business circles in the neighboring countries have been tight-lipped about the shortage of intergovernmental dialogue. But if excessive provocative acts continue, even the division of labor that has been built by Samsung and Japanese suppliers for coexistence and co-prosperity could crumble.

Japanese Trade Minister Isshu Sugawara said Friday that Tokyo would hold talks with Seoul over Japan's move to tighten export controls to South Korea, agreeing to Seoul's request for consultations as part of a dispute settlement through the World Trade Organization. But the talks are unlikely to resolve the issue, and are expected to be prolonged.

The political confrontation between Japan and South Korea is likely to benefit China on the economic front, especially in the semiconductor industry.

With China aiming for supremacy in high-technology industries, including semiconductors, top chipmaker Samsung seems to be a target for Chinese companies to overtake sooner or later.

And Samsung cannot afford to come to a temporary standstill in the face of an onslaught from Chinese rivals that are on a capital investment spree -- a few trillion yen annually -- under the initiative of the Chinese government.

"A China shift" is now underway among chipmaking equipment manufacturers. Semiconductor plant construction projects that require capital investment of about 1 trillion yen are emerging one after another in China, making the country a promising market for equipment makers.

Japanese companies are also "sending sales staff by the hundreds to China for long-term business trips to proceed with business talks in various parts of the country," said an official at Tokyo Electron.

Chinese makers likely will need some time to mass-produce advanced semiconductors in a stable manner. But there is no doubt that Japanese makers of parts and materials will also move to make "a China shift" in the future.

In fact, Chinese companies have overtaken their South Korean rivals in terms of liquid crystal panel production capacity. Many industry officials say the same thing will happen to the semiconductor industry.

Ahn Ki-hyun, a senior official at the Korea Semiconductor Industry Association, warned, "If barriers emerge between Japan and South Korea, it will benefit China's semiconductor industry, which is aiming for supremacy in each sector of the materials, equipment and final products."

Samsung has driven Japan's electronics industry into a corner. But it is becoming an increasingly likely scenario that the South Korean company will be overwhelmed by Chinese rivals.