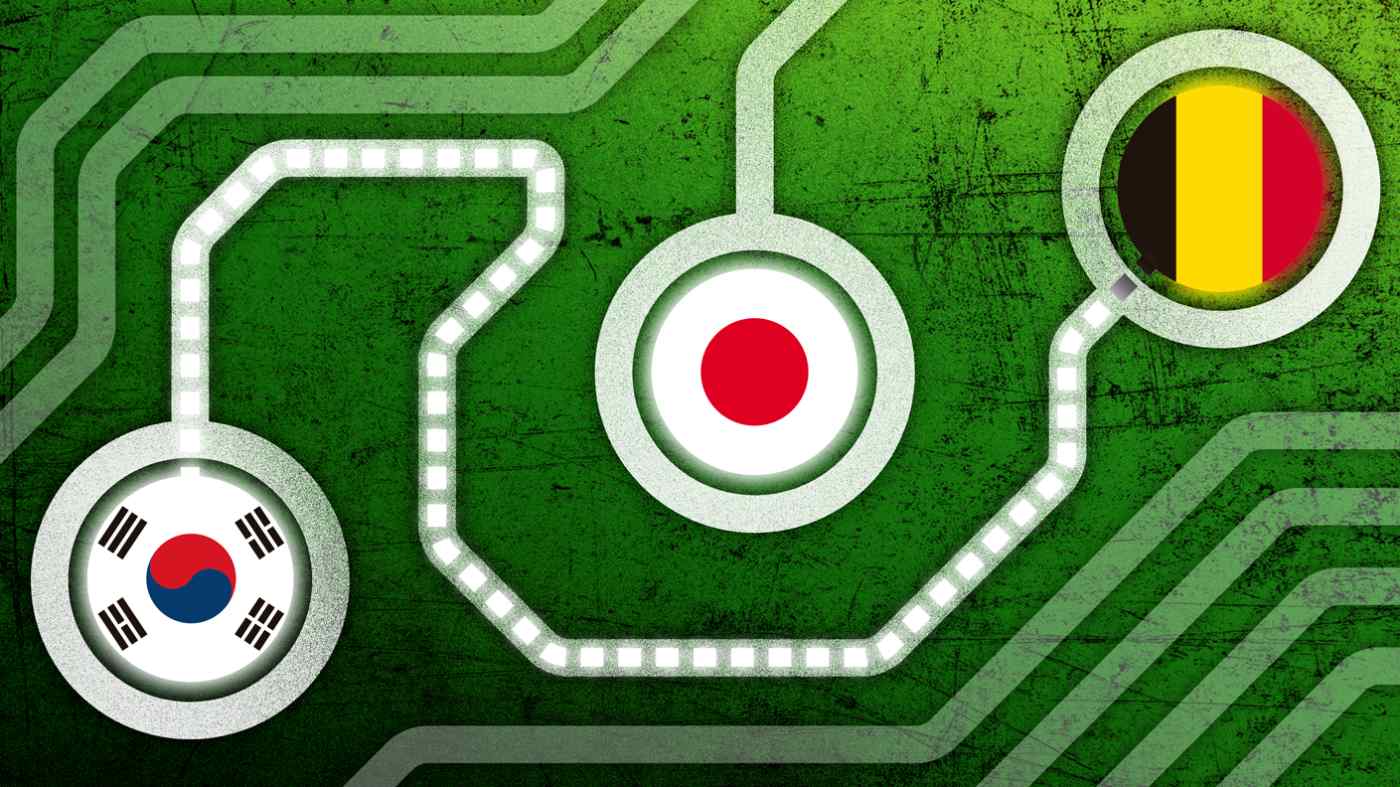 SEOUL -- Samsung Electronics is now sourcing a crucial chipmaking chemical from Belgium as Japan's restrictions on exports to South Korea leave the conglomerate facing a "crisis," a source has told the Nikkei Asian Review.

The smartphone and chip making giant has been scrambling to secure supplies of three compounds -- photoresist, hydrogen fluoride etching gas and fluorinated polyimides -- that have been subject to export restrictions from Japan since July.

Until now, Samsung's efforts had appeared to focus on other suppliers in Asia.

Park Jae-keun, a professor of semiconductor engineering at Hanyang University, says that Samsung is sourcing extreme ultraviolet photoresist from a Belgium-based company. According to Park, Samsung has bought six to 10 months' worth of the chemical, which is used to deposit circuit patterns onto silicon wafers in a cutting-edge chipmaking process.

Park, a former executive at Samsung in charge of semiconductor materials technology, did not reveal the name of the Belgian supplier, but analysts say that it is likely EUV Resist Manufacturing & Qualification Center, a joint venture established in 2016 by Japanese material company JSR and IMEC, a Belgian research center. The joint venture is majority owned by JSR Micro, a Belgian subsidiary of JSR.

This view is in line with what a source with knowledge of JSR told Nikkei in mid-July, after the Japanese government announced the export curbs. "We will supply photoresist [to Samsung] through our joint venture in Belgium," the source said. "By joining hands with IMEC, we can produce extreme ultraviolet photoresist there."

Park said that because Samsung has acquired fresh supplies of the chemical, "Japan's export curbs have had a limited impact, while Japanese companies' sales are declining."

Samsung declined to confirm whether it is sourcing materials in Belgium, but said that it is diversifying its suppliers to cope with Japan's export curbs.

The comment came a day after the Japanese government approved its first export of chipmaking materials to South Korea under the tighter controls. The greenlighted shipment of resist is believed to come from Shin-Etsu Chemical. Samsung will use it in making processors for outside customers rather than the South Korean company's own devices.

In a sign of how seriously South Korea's biggest conglomerate is taking the curbs, Samsung Electronics Vice Chairman Lee Jae-yong made a morale-boosting visit to the company's semiconductor packaging factory in Asan, south of Seoul, last Tuesday. The de facto leader of the group donned a white, full-body cleansuit to tour the facility, and joined employees for lunch in the company cafeteria.

"Be alert, but do not be afraid. Let us overcome this crisis," Lee said in a meeting with key executives. "Let us be prepared to have a better future by creating new opportunities."

As the trade spat escalates -- Japan recently removed South Korea from its list of preferred trade partners -- the risks for Samsung may likewise grow.

The company is worried that the trouble facing its semiconductor business will spread to its smartphone operations, which also rely on Japanese parts. Samsung Electronics CEO Koh Dong-jin, in charge of the company's mobile business, said that if Japan's restrictions continue, the company's smartphone business could start to suffer after three to four months.

"We cannot say that there is no problem in smartphones," Koh said at a news conference in New York on Wednesday after releasing its Galaxy Note 10 model. "We have three to four months' [worth of parts], but it can be very difficult if it goes beyond that period."

The trade dispute comes as Samsung grapples with poor earnings. Operating profit fell 56% to 6.6 trillion won ($5.6 billion) in the second quarter from a year ago, largely due to falling chip prices and sluggish smartphone sales.

Samsung is not the only South Korean company taking measures to deal with the export controls.

SK Hynix, the world's second-largest maker of direct random access memory chips, said it is stockpiling as much as possible of the materials subject to Japan's export curbs. The company said in a conference call last month that it is diversifying vendors as well as minimizing input volumes to make production as smooth as possible.

SK Hynix CEO Lee Seok-hee and President Kim Dong-seob visited Japan last month to meet the company's suppliers and discuss how to deal with the restrictions. Chey Tae-won, chairman of parent conglomerate SK Group, said that he is willing to visit Japan, too, if needed.

Japanese suppliers are also trying to find ways to avoid the export curbs, such as by supplying their products through a third country.

Morita Chemical Industries will begin producing ultrapure hydrogen fluoride in China via a joint venture this year, with an eye toward supplying it to Chinese chipmakers and Samsung fabrication facilities in the country. It will also ship the gas to South Korea if demand warrants.

"If similar problems come up between Japan and South Korea in the future, we can ship to South Korea from China instead of Japan," CEO Yasuo Morita said.

Samsung Display, meanwhile, said it has launched a task force to deal with the Japanese export curbs. "We are watching the situation very carefully," a company spokesperson said.

While chip industry players are keeping a close eye on the developments, politicians in South Korea appear less concerned about inflaming anti-Japanese sentiment.

"The Pandora's box is open. Our people's boycott of Japanese products will spread to the Tokyo Olympics," Kim said in a forum in Seoul on Thursday.

The former two-term lawmaker added that the dispute between the two countries cannot be resolved until Japanese Prime Minister Shinzo Abe resigns, accusing him of going "Hitler's way."